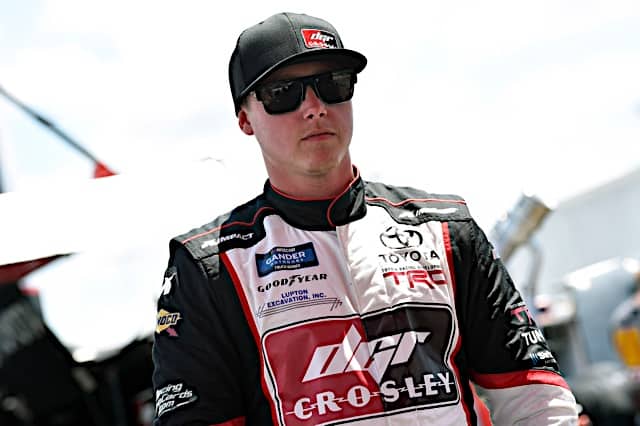 While the Camping World Truck Series sits quietly this weekend, teams will be preparing for next week’s (Sept. 5) trip to Darlington Raceway in place of what was originally scheduled to be a visit to Canadian Tire Motorsports Park. But scheduling logistics due to the COVID-19 pandemic forced the schedule to be altered once again.

It’s the second time this season the series has hit the 1.366-mile asphalt oval, but this time, for the nine playoff drivers whose names aren’t Sheldon Creed, it’s another shot to lock themselves into the next round and keep their championship hopes alive.

Meanwhile, for Dylan Lupton, it’ll be his 2021 Truck Series debut. And while he’s got 11 prior starts in the series, including three last season, this one is arguably his most competitive to date. He’ll step into the No. 51 Kyle Busch Motorsports Toyota, driven – and won in – by Kyle Busch and Martin Truex Jr. three times this season.

“The opportunity to drive top-notch equipment that Kyle Busch Motorsports prepares is a dream come true,” Lupton said. “The No. 51 team always prepares fast Tundras and I’m extremely excited to get to Darlington and be able to showcase my talent.”

Lupton first entered the NASCAR world in 2013 when he signed a two-year deal to run in the K&N Pro Series West. He won Rookie of the Year honors that season and ended 2014 in runner-up in the point standings to champion Greg Pursley.

The following season, he made eight Xfinity Series starts for the now-defunct Athenian Motorsports, and that included his career-best Xfinity finish of ninth at the Mid-Ohio Sports Car Course. In 2016, Lupton made just eight starts across NASCAR’s top three series (four Cup, two apiece in Xfinity and Truck). His best finish that season came in his Truck Series debut when he took the Young’s Motorsports No. 02 Chevrolet to a 12th-place finish at Talladega Superspeedway.

The 2017 and 2018 seasons saw Lupton make a combined 25 Xfinity Series starts for JGL Racing, a partnership that ended in a dispute on Twitter.

Meanwhile, he returned to the Truck Series in 2019 to run six races (five for David Gilliland Racing and one for Young’s Motorsports) and posted a career-best fifth-place finish at Kentucky Speedway. Lupton made just three series starts in 2020 but that did include an eighth-place run at Texas Motor Speedway to go along with a 14th and 16th at Las Vegas Motor Speedway and Phoenix Raceway, respectively.

Fast forward to this season and Lupton is getting a shot with one of the top teams in the series. I mean, you can’t really have a conversation about the best of the Truck Series without including KBM unless you just hate Kyle Busch and refuse to acknowledge the team’s accomplishments.

Now, none of this is to say Lupton is going to go out there and win the next race at Darlington. But what it does mean is that he’s got a chance to really showcase his talent. The equipment he’s piloted thus far in his career hasn’t been proven capable of regular, race-winning performance. That said, next weekend at Darlington is a golden opportunity for Lupton to put his name into the Truck Series silly season conversation.

After all, so many of the rides in the Truck Series aren’t often finalized until late October at the earliest and, more often than not, that kind of news is usually scattered throughout late December through late January.

If Lupton can stay out of trouble and avoid the Darlington stripe that pretty much every driver has gotten at least once in their career at the historic track, you can bet he’ll have an opportunity to put together a full-time ride for 2022 … if the funding can be put in place to make it happen.