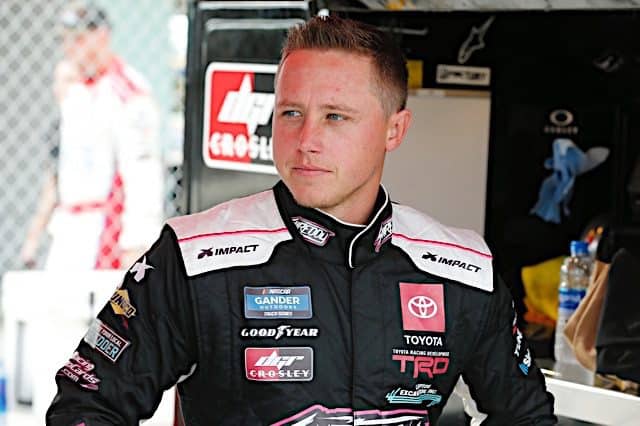 It’s been an event-filled week for Dylan Lupton, who announced Aug. 27 he’ll compete in the final four races of the 2021 NASCAR Camping World Truck Series season in a partnership between Reaume Brothers Racing and DCC Racing.

Lupton will drive the No. 34 Toyota in a partnership between the two teams, with Frankie Kerr serving as his crew chief. Sponsorship will be announced at a later date.

The news is Lupton’s third announcement of the week. Kyle Busch Motorsports announced he will pilot the No. 51 Toyota in the upcoming Truck race at Darlington Raceway. Then, Sam Hunt Racing announced Lupton will compete in two NASCAR Xfinity Series races this season.

Lupton’s four races with this organization will be at Las Vegas Motor Speedway, Talladega Superspeedway, Martinsville Speedway, and Phoenix Raceway.

“It’s been a big week for me, but I can’t thank Josh [Reaume, RBR owner] and Brad [Means, DCC owner] for the opportunity to drive the No. 34 Toyota Tundra for the final four Truck Series races of the season,” Lupton said in a team release. “We have worked very hard over the last eight weeks to make sure we are in a position to put a competitive truck on the track with the goal of elevating Reaume Brothers Racing performance too. I’m excited to work with Frankie, whom I’ve known a little since competing in the Truck Series over the past couple of years.

“It is going to be a very busy two and a half months or so, but I’m ready to get to work and do a great job not only for Josh and Brad but Kyle Busch Motorsports and Sam Hunt Racing too.”

Lupton has made 11 Truck starts, with one top five and four top 10s. He earned his career-best finish of fifth in the 2019 race at Kentucky Speedway.