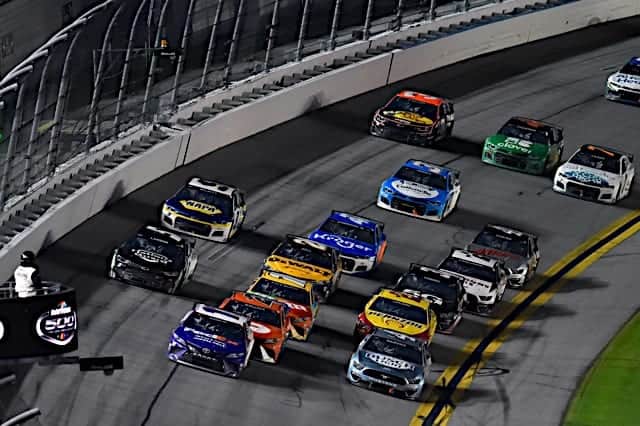 Daytona International Speedway looms large in the windshields of NASCAR Cup Series drivers on Saturday night (Aug. 28). The track will host the 26th and final race of the regular season.

2021 marks the second time the superspeedway has held the cutoff race for the playoff field, and the final spot is down to the wire: Tyler Reddick currently holds the 16th and final transfer spot. This season has featured 13 different winners and two drivers in Denny Hamlin and Kevin Harvick locked in on points, occupying 15 of the eligible berths.

Reddick is closely followed by Richard Childress Racing teammate Austin Dillon, who sits 25 points back of the cutline after his violent crash at Michigan International Speedway last weekend dropped him further back. Matt DiBenedetto, Chris Buescher and Ricky Stenhouse Jr. round out the top 20, while Ross Chastain, Bubba Wallace and Chase Briscoe follow close behind.

Larson, however, will start at the rear after multiple inspection failures. McDowell and Front Row Motorsports teammate Anthony Alfredo will as well; both cars were hit with deck lid extension penalties. NASCAR ejected the crew chiefs for both cars and announced that any further penalties would be revealed in the coming week.

NEWS: The No. 5 of @KyleLarsonRacin will start from the rear of the field due to multiple inspection failures at @DAYTONA for the #CokeZeroSugar400. pic.twitter.com/U35pyLP75u

A whopping 14 drivers in tonight’s field have won Cup races in Daytona in the past. Byron was 2020’s summer race winner, clinching a playoff berth in the regular season finale, while Michael McDowell is the most recent to roll into victory lane after his upset win back in February’s Daytona 500.

There’s always the potential for Daytona’s events to quickly devolve into wreck-fests with caution after caution, as the last two summer races there have been. However, there is one factor that likely won’t play into Saturday’s race: rain. The forecast calls for isolated thunderstorms well in advance of the green flag, with nothing else threatening at nighttime (at least for now).

The NASCAR Xfinity Series got their Friday (Aug. 27) race underway as scheduled, but incoming showers washed out the rest of the race until the next day. Cup, however, looks like they’ll have a dry race that will fire off as scheduled.

Earlier in the afternoon, Justin Haley emerged victorious in the rain-postponed Wawa 250, his first Xfinity win of the season and the fourth of his career. He led a Kaulig Racing party in the closing laps, with teammates AJ Allmendinger and Jeb Burton finishing second and fourth, respectively.

Terms of the extension "at least" another five years, team reps say from @DAYTONA. #NASCAR https://t.co/kjAZihf8fb