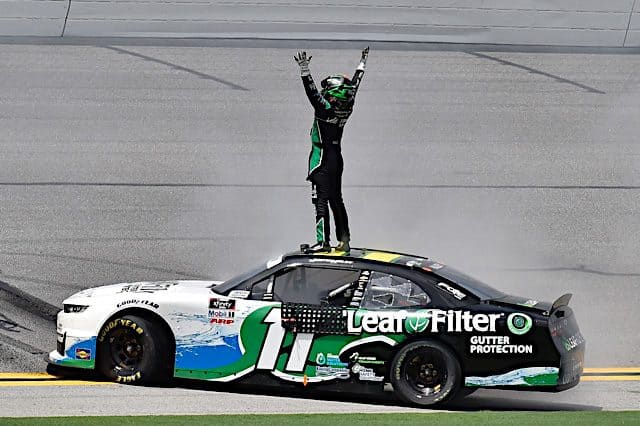 Kaulig Racing was dominant all day long, taking the top three positions in each of the first two stages. With five laps remaining, team orders were called and all three drivers linked up until the very last lap.

AJ Allmendinger was leading when the white flag flew until the three cars were three wide at the finish. Haley secured the victory, his first of the season and fourth of his NXS career — all at the large, pack-racing superspeedways of Daytona and Talladega Superspeedway.

RETWEET to congratulate @Justin_Haley_ on his WIN at @Daytona!

Haley said he was thrilled to be the third and final Kaulig driver to visit victory lane in 2021.

“It’s not been the best season,” Haley said after the race. “It’s been really hard on the No. 11 team all year. Hats off to Kaulig Racing, I think we have the teammate thing down. Just to beat out AJ means a lot to me.”

“As much as I wanted to win, that was pretty freaking cool,” Allmendinger added.

Everything changed for the race at Daytona when rain moved in Friday night, postponing the event just after 19 laps. Allmendinger led the field back to green for the Saturday afternoon rescheduled start.

With four to go in stage one, Myatt Snider pushed Austin Cindric, turning him into the wall. Michael Annett, after missing the last four of five races, was involved in the incident, as well as Daniel Hemric.

Myatt Snider gets into Austin Cindric, and a handful of cars are damaged after this crash. #NASCAR x @Daytona

On the radio commenting about the wreck, Cindic screamed, “What an idiot! … I’ve done a total of 40 laps in the last two weeks. I felt like we had a shot to win today and win last week.”

Cindric is now in a battle for the regular-season points championship; he was 35 ahead of Allmendinger coming into Daytona.

After stage two got underway, a debris caution for Annett flew from the previous incident, caused by a tire rub. The rest of the stage remained calm, with teammates trying to link up and work together until Blaine Perkins and Caesar Bacarella got together to cause a debris caution, from which Landon Cassill received some damage.

Brandon Brown led the field to green and was passed by Burton for the lead. However, he eventually ran out of fuel before the stage finished up. Kaulig once again proved victorious, finishing in the top three once again at the end with Burton first, Allmendinger in second and Haley third.

The biggest wreck in the final stage was when Colin Garrett got loose and spun across the track, getting stuck in the infield grass. Noah Gragson, leading at the time, welcomed the caution as he had debris on his grill and was able to clean it off using the pace car instead of making an unscheduled pit stop. Unfortunately, Gragson did not hold onto the top spot and faded from contention down the stretch.

With 18 laps remaining, Bacarella once again brought out the yellow after sliding into the top lane. He got turned and hit the wall, collecting Jade Buford and Matt Mills coming down across the track.

Ultimately, Kaulig once again linked up and took the victory away from Christopher Bell, as the three teammates ran to the front and had a three-way battle for the lead at the end. Allmendinger who was leading when the white flag flew, finished in second place. Third place was the JR Motorsports No. 7 of Justin Allgaier, and fourth went to Burton. Hemric rounded out the top five.

Next, the Xfinity Series travels to Darlington Raceway on Saturday, Sept. 4. The green flag is set for 3:30 p.m. ET, with TV coverage from NBC Sports Network.

Did anyone noticed that Just Allgaier locked bumpers with AJ Allmendinger all the way down the front stretch coming to the checkered flag? The rule is you can bump but not lock on to bumpers. This matters because it screwed Jeb Burton out of a 3rd place finish, making Kaulig Racing a Win, Place and Show finish. Matt Kaulig should make an inquiry to NA$CAR for his Team.