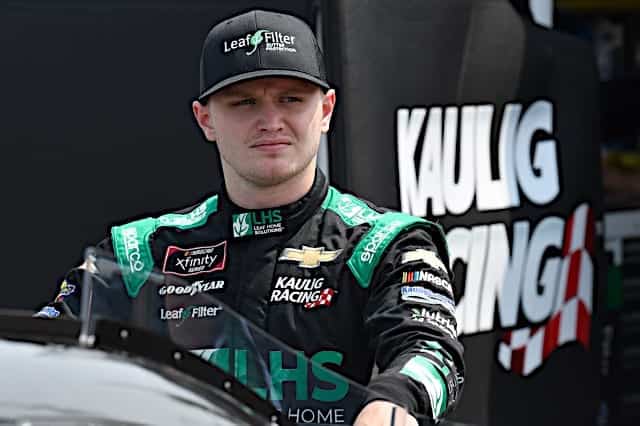 Remember the days of the restrictor plate dominance of Dale Earnhardt, Inc.? How Dale Earnhardt Jr., Michael Waltrip and co. dominated races at both Daytona International Speedway and Talladega Superspeedway?

Kaulig Racing is showing similar signs of greatness on the high-banked NASCAR giants in the Xfinity Series.

On Saturday afternoon (Aug. 28), Kaulig Racing led the way again at Daytona during the Wawa 250. At the end, the three Chevrolets were practically in formation three abreast while crossing the line.

No one person made this win happen, it took all three teams!! ?

The teamwork all day long between our drivers was unmatched by any other team in the race, and that's why we're the ones in victory lane!#OneTeamOneFamly | #Wawa250 | #TrophyHunting pic.twitter.com/z4gUvqo93N

The win marks Kaulig’s sixth NXS superspeedway victory in two years. Since Ross Chastain first won for the team at Daytona in 2019, it’s captured all but two pack racing events on the series schedule.

So, yeah, maybe Kaulig’s figured this whole drafting thing out.

But it wasn’t just the finish that was impressive. With less than five laps to go, the three Kaulig Chevys found each other to lock bumpers and effortlessly freight trained themselves to the front. The move put a cap on a day that showed the three cars working constantly working together throughout the 100-lap event.

“It started early. Me and Jeb were back in traffic, and we needed to make a run,” race winner Haley said. “We formulated a plan, and it worked, as it should.”

According to Kaulig Racing President Chris Rice, that was always their plan.

“We’ve got to stay a team. A family. Like we have in the past,” Rice said. “We have conversations a lot throughout the year. We let the drivers know it’s Kaulig Racing. They’re all the same. It’s not about one car.”

Of course, as it is with every race at Daytona, it was every driver for themselves at the white flag.

Approaching the checkered, Allmendinger went into the middle of teammates Haley and Burton, making the fight for the lead on the final lap a Kaulig sandwich.

RETWEET to congratulate @Justin_Haley_ on his WIN at @Daytona!

“When you have runs like that, you have to go,” runner-up Allmendinger said post-race. “It’s pretty simple. When you’re three wide, nobody’s going to pass you. That’s the whole goal: get a Kaulig Racing Chevy into victory lane. It’s cool to come across the line like that.”

In the end, Allmendinger fell short of the race win as Haley went on to score his first victory of 2021. It was Kaulig’s fifth, as all three drivers have now won at least once this season.

“I think the other cars try to do what we do, but I think we’re just on another level,” Haley said in a post-race press conference. “I think it’s the bond between me, Jeb and AJ. We all have trust in each other. There’s no selfishness. I was fully ready to push Jeb or AJ to the win. It was going to be what it was. I wasn’t going to get greedy. How Chris Rice has laid it out for us, that’s what we do. We formulate plans.”

Perhaps that’s the difference. In all of superspeedway history, there are plenty of accounts of drivers pushing teammates to the win, yet it usually appears to happen out of circumstance. No team truly has been able to stay together and constantly run up front, time and time again, in recent years like Kaulig has.

While the win count on superspeedways is impressive, the overall consistency of the team is perhaps even more so. Remember that nugget about the team having six wins in superspeedway races in the last two years? Well, in the last seven out of eight superspeedway events, at least two Kaulig cars have finished in the top six. That’s a streak that stretches back to Kaulig’s first win in 2019.

How do three drivers, with three different backgrounds and ages, share this strong a bond?

Daytona made clear that’s all they need.

To have a plan, & be able to execute it to near perfection, given the nature of pack racing. Is not only smart, but extremely difficult. I’ve been an AJ fan since his Indy car days. But I’m happy that unlike F1, the plan didn’t dictate a winner. But allowed them to race for it. Well done.

Hey Ross — that’s how teammates work together, not taking every another out like you selfishly did a year ago