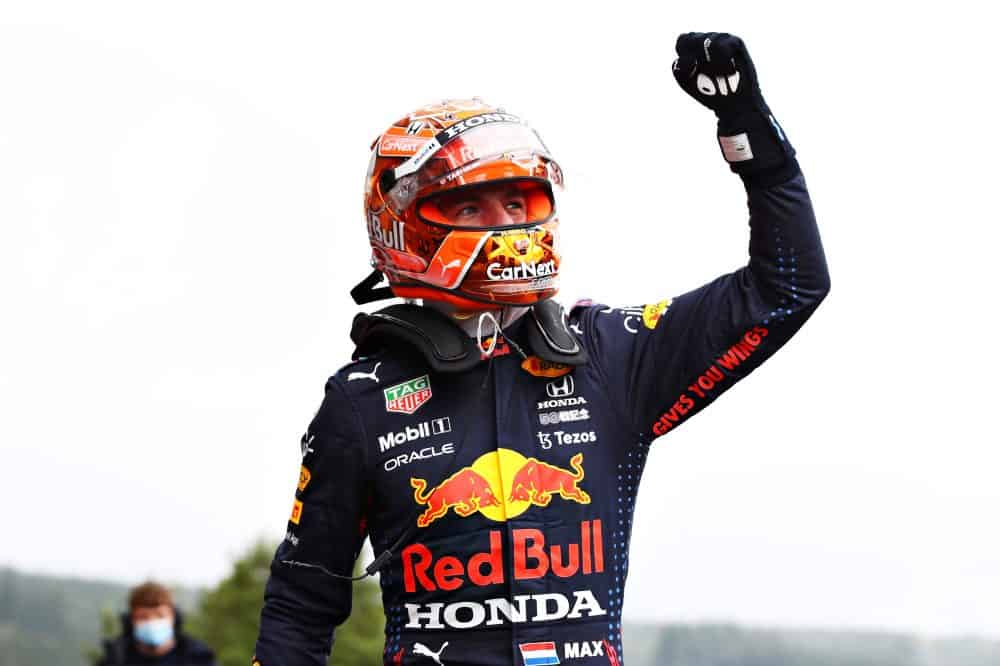 In changeable conditions, Max Verstappen excelled to take pole position for Sunday’s (Aug. 29) 2021 Belgian Grand Prix for Formula 1 with a lap time of 1:59.765.

However, it wasn’t Lewis Hamilton that the Red Bull driver had to beat to pole but George Russell, with the Williams driving looking incredibly comfortable in the wet. Russell had set an incredible lap time of 2:00.086, just ahead of Hamilton’s Mercedes in third, but Verstappen just pipped him at the end.

It is Russell’s first front-row start for Williams and the team’s first appearance on the front row since Italy 2017.

Daniel Ricciardo, who just managed to sneak into Q3, placed fourth for McLaren, ahead of the Aston Martin of Sebastian Vettel and the Alpha Tauri of Pierre Gasly. The second Red Bull and Mercedes drivers were unable to match the speed of their teammates, with Sergio Perez down in seventh and Valtteri Bottas behind him in eighth. Bottas has a five-place grid penalty for his crash in Hungary and will drop further down the grid. Esteban Ocon finished the session ninth for Alpine.

There was drama at the start of Q3; as the rain began to fall more heavily, Vettel called for a red flag over the radio, but the stewards held off. Almost immediately afterward, Lando Norris lost control of his McLaren as he flew through the Eau Rouge-Raidillon complex, trying to correct some oversteer and smashing into the barriers. His car was torn to pieces and his day was done.

He emerged from the car on his own accord, but was clutching he left forearm as he walked to the medical car. Norris had been running at the top of the field throughout qualifying but will now start the race in at least 10th.

Following his accident during qualifying for the Belgian Grand Prix, Lando was checked at the trackside medical centre and then sent to a local hospital for a precautionary x-ray of his elbow. A further update will be issued in due course.

The teams had predicted more rain at the beginning of Q2, but the rain mostly held off for the second qualifying session. Every team except Mercedes went out on a new set of intermediates, with Mercedes staying on used tires but immediately calling its drivers back to the pits after their out laps to fit fresh rubber.

Bottas followed his Mercedes teammate, going third and pushing Ricciardo out, but the Australian responded and edged the Ferrari of Charles Leclerc into 11th and out of the session.

The Williams of Nicholas Latifi will start 12th, eliminated by a late fast lap from Ocon, whose Alpine teammate Fernando Alonso will start 14th. Lance Stroll, driving for Aston Martin, placed 15th but has a five-place grid penalty for his collision with Leclerc in Hungary and will drop to the back of the grid for tomorrow’s race.

Q1 was initially delayed by around 12 minutes due to heavy rain, and when the session started every team except for Williams went out on the full wet tires, with the Grove-based squad the only team to gamble on intermediates. Williams’ choice proved right, with Russell and Latifi topping the charts early in the session, but there was still enough time for the other drivers to make the switch and as the track dried the times dropped dramatically.

By the end of the session most of the drivers had set representative times and the final qualifying attempts brought little change. Alfa Romeo’s Antonio Giovinazzi jumped ahead of Alpha Tauri’s Yuki Tsunoda for 16th, but the result ended a five-race streak of Giovinazzi reaching Q2. Behind Tsunoda in 18th was the Haas of Mick Schumacher, followed by the Alfa Romeo of Kimi Raikkonen and the Haas of Nikita Mazepin.

Earlier this week, two drivers renewed their contracts: Perez will join Red Bull for another season while Alonso will stay at Alpine for 2022. Both are smart moves for each team. Perez has managed to run up front and give Red Bull more strategy options when battling Mercedes, something his predecessors in the second Red Bull seat had difficulty doing consistently. Alonso, meanwhile, has scored in six straight races coming into Belgium and has looked especially rapid on his return to F1 after a two-year hiatus.

F1’s summer break also produced some more dramatic silly season news. The question of whether Russell will replace Bottas at Mercedes for 2022 remains unanswered, despite Mercedes team principal Toto Wolff saying the decision would be made over the summer. In an incredibly awkward joint press conference, the two drivers were asked about the situation. Bottas said coyly, “Maybe I know something, maybe I don’t but like I said there’s no news to share.”

“There’s nothing to announce one way or another this weekend, and probably not next weekend either to be honest, which I think is no problem,” Russell responded. “Do things right, rather than quickly, let’s say.”

Russell seemed a bit exhausted with the silly season interview mania and the deal-making process, and it’s starting to seem like every day that Russell is not announced at Mercedes, it’s more likely that Bottas could retain his seat. Although nothing is free in F1, Russell ultimately deserves the seat, after waiting in the wings at Williams for three seasons and still managing to show his top-tier talents. Bottas is a solid driver but hasn’t been able to match Hamilton, especially this season where he is still behind Norris in the standings.

Should Bottas remain at Mercedes, Russell is likely to be partnered again at Williams by Nicholas Latifi, with team boss Jost Capito saying, “Yes, it looks like, I would say,” when asked whether the Canadian driver would be re-signed.

Although many fans deride Latifi for his lengthy stint in Formula 2 and his wealthy background, he has actually been up to par in F1, especially given the machinery he is in. In his rookie season last year, Latifi finished 11th three times while Russell only placed that high once when he was in the Williams. And when Russell finally got his first points last time out in the chaotic Hungarian Grand Prix, Latifi finished right ahead of him in seventh, getting his first points and one-upping his much-hyped teammate.

This is not to say that Latifi is better than Russell, however. The Canadian has lagged in qualifying, but regardless he has had strong drives, has a good relationship with the team, and communicates well with the engineers. The move would make sense for both parties, and the new regulations for 2022 along with the cost cap could help Williams, and Latifi, move further up the grid.