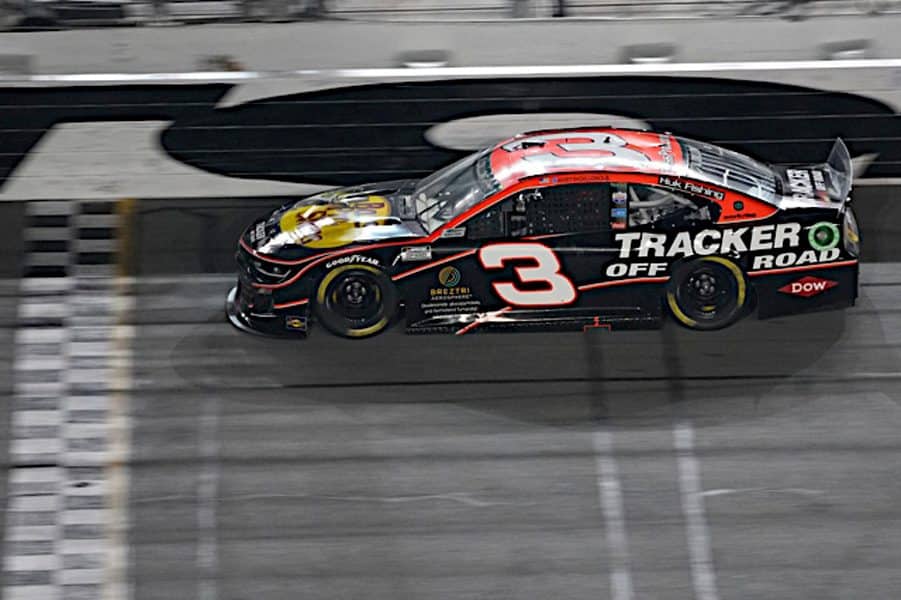 DAYTONA BEACH, Fla. – Halfway through the the final lap of the Coke Zero Sugar 400 at Daytona International Speedway, Austin Dillon was racing his heart out in one last effort to make the NASCAR Cup Series playoffs.

Teammate and playoff rival Tyler Reddick was running 17th after he had suffered damage to the front end of his No. 8 Chevrolet, which meant Dillon had the perfect opportunity to gain his foothold as the last seed in the 2021 postseason. Dillon was running sixth on that backstretch, building a run through the middle of the pack.

Then all hell broke loose.

While following Chip Ganassi Racing driver Ross Chastain, Dillon went low to avoid a crash that had begun right in front of him. It was a split-second decision, and a costly one.

Chastain was sent to the inside and directly into Dillon’s Bass Pro Shops Chevrolet. What followed was an image of a wad of cars, carnage that has become synonymous with the often-wild Daytona International Speedway pack racing. Dillon’s car finally came to a rest in 18th position, wedged between the 33-degree banking and the apron.

Ryan Blaney won, and teammate Reddick finished sixth, securing his spot in the 16-driver field. Dillon’s playoff hopes were over.

Ryan @Blaney WINS at @Daytona as the field wrecks behind him!

Also, @TylerReddick has made the #NASCARPlayoffs for the first time in his Cup Series career. pic.twitter.com/SfoshRiqUG

“I felt like I had an opportunity there,” Dillon said post-race. “We had to restart from the back. We raced our tails off, and we just came up short.”

Even without the last-lap crash, it was not an easy night for Dillon. His issues really began during stage three.

Following a late crash involving the Rick Ware Racing cars, Dillon came to pit road and was busted for speeding, but that was after discovering that he had power issues in his car, forcing him to begin saving amps by turning off his air conditioning.

“It was dropping voltage there,” Dillon said. “We needed to change it. It started dying. I looked down and could see the voltage dropping.”

With less than 10 laps to go, Dillon had to reduce a 17-point deficit from his teammate Reddick in order to keep his championship hopes alive after restarting at the tail end of the field. Oh, and he now had no AC. In Florida. In the summer.

But he wasn’t done.

The first big one happened right in front of the RCR car, but Dillon steeled his nerves and channeled his inner Cole Trickle to drive through unscathed.

“We got fortunate when we missed that big wreck,” Dillon said. “I was on the bottom lane, and I felt like that was the best place to be if there was a big wreck. Turns out it was.

“We went to fourth. That’s where won the race from when we won the (Daytona) 500, so I felt pretty confident there.”

Despite missing the playoffs, it’s still a bittersweet result for the Welcome, N.C., native. After all, his grandpa’s race team was still able to get a hat in the ring when it comes to the playoffs.

“(Reddick)’s got some good tracks ahead of him with Darlington [Raceway] and Bristol [Motor Speedway],” Dillon said. “He could go pretty far. He’s very talented, and I know RCR will give him a shot every week. I’ll be trying to help out as much as I can as a teammate.

“Now it’s time for the No. 8 car to do the best he can in the playoffs and get RCR the best [finish] they can for points.”

This year’s playoffs will be the fourth time Dillon has not made an appearance in his eight years of full-time Cup competition.