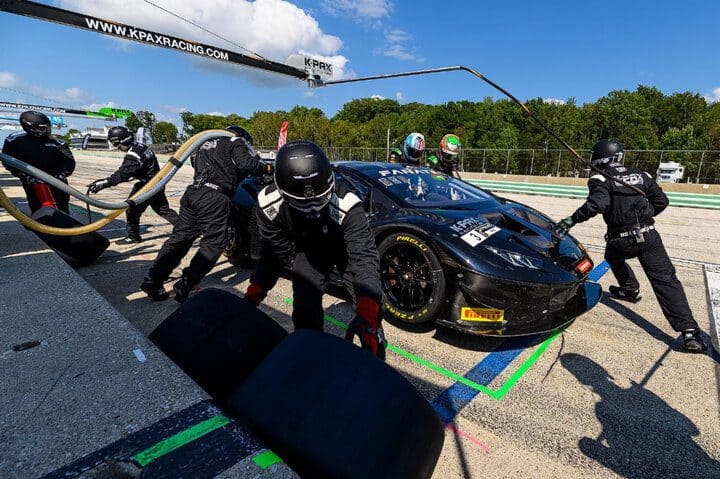 16 cars had been entered for the race weekend at Road America, but the numbers were reduced to 15 by the time the race came around.  A big crash for George Kurtz on Friday forced DXDT Racing to withdraw the No. 04 Mercedes.

The first race of the weekend saw Caldarelli launch from the pole and beat HTP Winward Motorsport’s Russell Ward to turn 1.  The Lamborghini Huracan was good enough to allow Caldarelli to open up a healthy gap.  Meanwhile, Ward fell into the clutches of Dinan’s BMW.  On the fourth lap of the race, Dinan made the move for second entering turn 5.  The duo ran side-by-side through turn 6 before Dinan swept into second entering the Hurry Downs.

Caldarelli’s advantage continued to increase as Ward came back on Dinan to try to get the spot back.  By the time that the mandatory mid-race pit stop came around, Caldarelli’s lead was nearly 10 seconds over Dinan.

The pit stop itself only increased the lead for K-PAX Racing.  Both of the K-PAX Lamborghinis spent only a little more than the minimum 86 seconds on the pit lane.  Meanwhile, HTP Winward Motorsport spend around 90 seconds and Turner Motorsport over 91.  As a result, Pepper inherited a 13-second lead after the stops.

Philip Ellis beat Foley off pit road to take over second.  Foley ended up being penalized for a pit lane infraction and had to do a drive-through penalty.  He would end up seventh.

Slowly but surely, Ellis cut into Pepper’s lead.  With 10 minutes to go, the lead was down to two seconds.  At this point, Pepper caught the slower car of AF Corse’s Jean-Claude Saada.  After being held up, Pepper was able to get past.

Ellis tried to make his pass on Saada entering the Kink.  It got too close as Ellis and Saada had side-to-side contact entering the treacherous turn.  Saada went off-course on exit, then spun across the track and hit the wall on the right side of the track before coming to a stop in the middle of the track.

Saada was ok, but the safety car was forced to come out with eight minutes remaining.  The cleanup was unable to be completed before the end of the race, giving Caldarelli and Pepper the overall victory.

No penalty was assessed in regards to the crash, so Ellis and Ward kept second place.  Corey Lewis and Giovanni Venturini in the second K-PAX Lamborghini were third, followed by Dinan and Foley.

In Pro-Am, Compass Racing’s Michael Di Meo won the pole and led the entire first half of the race.  Racers Edge Motorsports’ Taylor Hagler was not far behind in her Acura, but not close enough to pounce.  The two of them had a fairly substantial lead over Wright Motorsports’ Fred Poordad.

It was the pit window that ultimately decided the race.  Racers Edge Motorsports had a great pit stop just one-hundredth of a second more than the minimum.  That allowed them to jump the Compass Racing No. 77, which had a slow stop.  Hagler was a couple of seconds behind Di Meo before the stops.  After the stops, Dakota Dickerson had a seven-second lead.  Further back, Jan Heylen was a man possessed in third, turning in the fastest laps of the race.

With 25 minutes to go, Heylen ran down Matt McMurry in the Compass Acura and battled him hard for position.  However, he could not get past.  The caution ended any chance of further progress as Dickerson and Hagler took the class victory.  For Hagler, it is her first class victory in SRO America competition., t

Dickerson and Hagler ended up third overall at the end of the race.  Di Meo and McMurry were second, followed by Heylen and Poordad.  TR3 Racing’s Giacomo Altoe and Martin Fuentes were fourth in their Lamborghini, while DXDT Racing’s David Askew and Ryan Dalziel were fifth.

The Am class actually had competition in Road America as TR3 Racing entered a second Lamborghini for Bill Sweedler and John Megrue.  Any chance of true competition between them and AF Corse’s Saada and Conrad Grunewald ended about 25 minutes into the race when Sweedler was forced to pit with mechanical issues.  They were able to get back out, but ended up five laps behind the leaders.

Grunewald qualified a strong fifth and was able to maintain during the first half of the race.  That put him ahead of all of the Pro-Am teams.  Di Meo was able to get past the Ferrari a couple of laps before the pit window opened for fifth overall, but Grunewald was still very strong.

The No. 61’s pace dropped off quite a bit once Saada got in the car.  Staying out as long as possible and a bad pit stop dropped Saada from sixth to ninth after the stops.  He then dropped back to 11th.  He was still in position to easily win the class before crashing after the aforementioned contact with Ellis.

The crash ended Saada’s race.  However, since it happened in the final 10% of the race and they had a five-lap lead over Megrue, time ran out before they could be forced out of the lead.  The winning margin was officially one lap.

Dickerson started his Pro-Am Acura on pole and spent much of the first half of the race in a fierce battle for the overall lead with Heylen.  Further back, DXDT Racing’s Michael Cooper spun exiting turn 6 after contact with Pepper.  Cooper was able to pull away, but there was damage down to the car that ultimately put Cooper and Erin Vogel out of the race fairly quickly.  Pepper continued, but fell all the way back to 12th as his speed struggles from Saturday continued.

At first, it was a three-car race at the front between Dickerson, Heylen and Pro-leader Foley.  Eventually, Foley fell away from the two leaders and into a Pro-class battle for the lead with Ellis, while the Pro-Am entries of Altoe and Dalziel gave chase.

Roughly 30 minutes in, Heylen’s charge stalled as the tires wore.  That allowed Dickerson to increase his advantage up to three seconds.  When the pit window opened 40 minutes into the race, the two leaders stayed out as long as possible.

When the window closed, Hagler ended up with the overall lead with Poordad in second.  However, Ward was coming in a hurry.  He made short work of Poordad for second overall, then passed Hagler in turn 3 with 34 minutes remaining to take the overall lead.

Once in the overall lead, Ward ran away and hid from the rest of the field.  Within five laps, he already had a seven-second lead.  The advantage extended to more than 15 seconds when trouble struck late.

Fanatec GT World Challenge America Powered by AWS races are 90 minutes in length with a mid-race stop.  That mid-race stop involves refueling.  It appears that HTP Winward Motorsport failed to get the No. 33 Mercedes-AMG GT3 full during the stop.  As a result, Ward was forced to pit with six minutes remaining for a splash of fuel.

Dinan and Foley’s margin of victory was 4.662 seconds over Lewis and Venturini.  Caldarelli and Pepper were third, while Ward and Ellis were a disappointing fourth.

In Pro-Am, Hagler gave up second overall to Dinan, but was still in control of the Pro-Am.  That was until the right front wheel locked up with 22 minutes to go.  Hagler was able to drive the car back to the pits, but was unable to continue.

Hagler’s misfortune gave the Pro-Am lead to Poordad in third overall with a fairly substantial lead over second.  From there, Poordad held on to take the win.  Heylen and Poordad’s margin of victory was 27.458 seconds over Altoe and Fuentes.  Askew and Dalziel were third.  Ian Lacy Racing’s Frank Gannett and Drew Staveley were a lap down in fourth in their Aston Martin, while Rearden Racing’s Vesko Kozarov and Jeff Burton were fifth.

In the Am class, Megrue led early in his Lamborghini, but Saada, using a backup car after his Saturday crash, swept past.  Grunewald was able to bring home the Am win by 40.510 seconds over Megrue and Sweedler.

SRO America teams will take the next couple of weeks off before returning to action at Watkins Glen International the weekend of Sept. 17-19.  Frontstretch plans to be there at Watkins Glen to bring you all of the action.