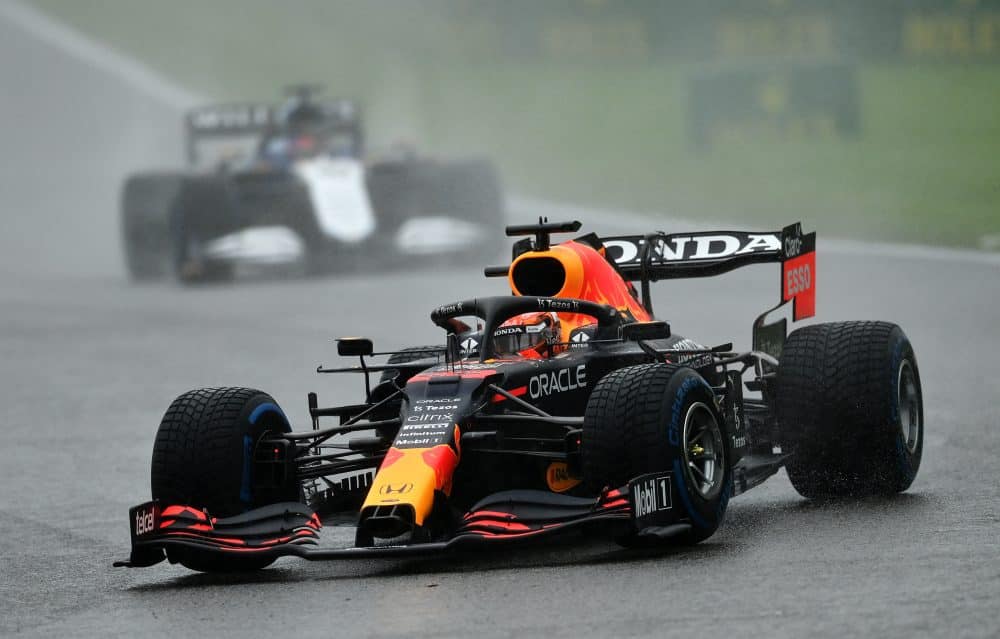 On a rain-soaked evening in Belgium, Max Verstappen picked up his sixth Formula 1 win of 2021 after winning the Belgian Grand Prix on Sunday (Aug. 29).

After a dominating lap in wet conditions during Saturday’s qualifying session, the Belgian-born Dutchman picked up his first win at the Spa-Francorchamps circuit.

The race was deemed official despite only running a total of four laps behind the safety car, with half points awarded for all drivers who earned them.

“It’s a big shame to not do proper laps, but the conditions were very tricky out there, the visibility was low.” Verstappen said post-race.  “It kept raining. Of course it’s a win, but it’s not how you want to win.”

Williams’ George Russell set an excellent lap of his own during Q3, putting him second on the grid. Given the odd circumstances, the young Brit finally got to celebrate his first podium finish in F1, the first Williams driver to sit there since Lance Stroll in 2017 at Baku.

“We don’t often get a reward for a good qualifying, but today, we absolutely did,” Russell said. “From our side and the team’s side, it’s a great result. The whole team deserves it, there’s so much hard work going in and there’s not been anything to show for it. I didn’t expect that this year, that’s for sure.”

Points leader Lewis Hamilton was classified in third, dropping his points lead down to three marks ahead of Verstappen.

Sergio Perez was due to pick up half a point after starting 10th, but after a crash during the opening formation lap, the Mexican was relegated to 20th position.

Next, F1 heads to Zandvoort for the revival of the Dutch Grand Prix. It’s the first time the series will race there since 1985, an event won by Niki Lauda.

The lights are set to go out Sept. 5 at 9 a.m. ET with television coverage provided by ESPN.

I understand no one can control the rain. But the rules that are set in place to handle this situation is absolutely stupid. It is a colossal insult to ticket paying fans in the seats. The race should of been postponed until Monday or rescheduled to one of the remaining open weekends.

I know! Who does that?