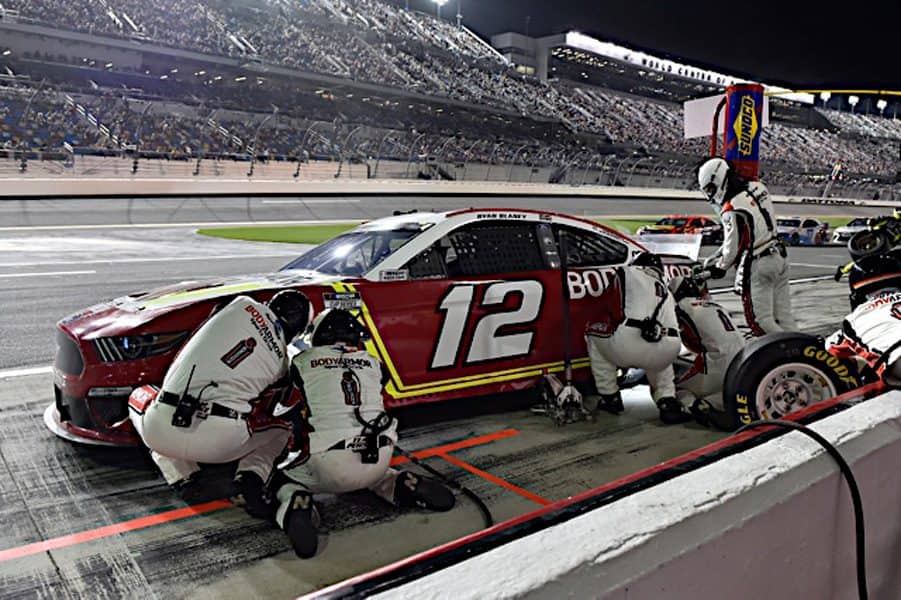 The 2021 NASCAR Cup Series regular season finale ended exactly the way the year began: with a wreck at Daytona International Speedway on the final lap.

This time, Ryan Blaney found himself on the right side of Lady Luck.

After a wild race, filled with high stakes for drivers fighting for a spot in the playoffs, Blaney drove to victory lane in the 2021 Coke Zero Sugar 400. The Daytona win was the first time in his career he’s won back-to-back in the NASCAR Cup Series.

Blaney survived a chaotic ending involving overtime and a wreck on the race’s final lap. As the No. 12 Ford sped down the backstretch, contact between Daniel Suarez and Kurt Busch caused carnage on the back straightaway that ended the race under caution. Blaney wound up coasting to the checkered flag ahead of Chris Buescher, notching his third victory of 2021 and second straight for Team Penske on pack racing superspeedways.

“This was two weeks in a row I’ve gotten really great pushes,” Blaney said after the race. “Corey LaJoie gave me a great one on that last restart to push to me the lead.”

The victory by someone who already won meant Tyler Reddick earned the final Cup playoff spot on points. Despite a late-race wreck of his own, Reddick’s team kept his damaged car on the lead lap and outlasted Richard Childress Racing teammate Austin Dillon (18th) to clinch it.

The Coke Zero Sugar 400 filled with drama before the green flag even waved. Kyle Larson, Michael McDowell, Anthony Alfredo, Joey Gase, Kaz Grala and LaJoie all had to start from the rear due to failing pre-race inspection.

Once the green flag flew in stage one, it didn’t take long for Hendrick Motorsports teammates William Byron and Chase Elliott to link up and lead the field in the opening laps. Elliott outlasted Hamlin to win the stage after an issue with debris on his grille. Further back, Michael McDowell blew his engine, ending the Daytona 500 Cinderella winner’s shot for back-to-back Daytona wins.

Before stage two, Logano was sent to the rear for his pit crew throwing a gas can over the wall. But the second stage will be known for the race’s first wreck when, on lap 76, Aric Almirola’s bad luck this season continued. The New Hampshire Motor Speedway winner and Alex Bowman got together after the field stacked up once Reddick and LaJoie made contact.

Aric Almirola and Alex Bowman go for a ride at @Daytona. #CokeZeroSugar400 #NASCAR

Logano, meanwhile, went on a tear, charging back to win stage two. He beat out Dillon, who passed teammate Reddick for more stage points to try and clinch the final playoff position.

Until the final stage, manufacturers weren’t working together for most of the night. That trend changed once green flag pit stops began as the Fords pitted together first. With 20 laps remaining, the Toyotas had broken away from the field but the race seemed set for the type of manufacturer strategy that decided February’s Daytona 500.

It was then the caution flew as a trio of Rick Ware Racing drivers changed the outcome. Garrett Smithley got loose off turn 4 and made contact with teammates Cody Ware and Joey Gase.

Three RWR cars involved in this one. Less than 20 laps remain in the final race of the regular season on NBC!

The Toyotas and Chevrolets then pitted together under yellow with most taking fuel only. Larson and Elliott took four tires while a handful of drivers, such as Christopher Bell, took two, putting the Fords out in front.

The jumbled-up field didn’t last long under green, though. Ricky Stenhouse Jr. hooked Truex after a check-up further ahead, turning him into the wall and starting the Big One. Byron, Landon Cassill and Daniel Suarez were among those involved in an incident that brought out a 15-minute red flag.

Once the race went back green, Logano took control. He was leading with five to go and appeared to be in good position to score the victory. However, the No. 22 Ford blew a tire in front, slammed the wall in turns 3 and 4 and dropped from contention.

That left the race in the hands of DiBenedetto and Elliott. But with three to go, the two made contact, causing Hamlin in the third position to get loose, wrecking all three as well as several other drivers.

IT'S THE BIG ONE!

Ultimately, in overtime, another big pile-up happened as Blaney drove to his second straight win. Harvick, Suarez and Kurt Busch all made contact and triggered the wreck.

Ryan @Blaney WINS at @Daytona as the field wrecks behind him!

Also, @TylerReddick has made the #NASCARPlayoffs for the first time in his Cup Series career. pic.twitter.com/SfoshRiqUG

Buescher scooted through the carnage to finish in second but was disqualified in post-race inspection. NASCAR officials claimed the track bar mounting assembly did not conform to specifications under rule 20.3.3.3.b. That meant Bubba Wallace moved up a spot, tying his career-best finish earned at the 2018 Daytona 500. The runner-up result was the best for first-year team 23XI Racing.

Rounding out the top five were two Ryans, Ryan Newman in third and Ryan Preece in fourth, then Reddick. The NASCAR Xfinity Series winner from earlier in the day, Justin Haley, ended the night in sixth while HMS teammates Bowman and Elliott finished seventh and eighth, respectively. A pair of underfunded drivers rounded out the top 10 with their best career finishes: BJ McLeod took ninth while Josh Bilicki was 10th.

Larson clinched the regular season points title over Hamlin and will enter the playoffs as this year’s top seed. The first race of the NASCAR Cup postseason will be the Southern 500, held at Darlington Raceway on Sunday, Sept. 5. Television coverage will be provided by NBC Sports Network starting at 6 p.m. ET.

Sorry Denny lol, but Larson is the regular season champion.

Made my day too!

Bubba thinks he should have won, disappointed in himself. Uhhh, dear bubba, half the field in front of you wrecked out, that’s why you finished 2nd.

I have a question, The King’s record shows 200 victories. That’s much more impressive than 199. One of the last ones was won with a very oversized engine, but the victory was allowed to stand. This wasn’t some obscure technical violation, but blatant cheating. If the 17 had won, instead of finishing 2nd, does anyone think his victory & advancement to the playoffs would have been allowed to stand?

Petty has 203 total wins. He has one on dirt in a topless car and two in K&N West.

130 laps of riding around followed by 30 laps of mayhem. Wasn’t that great of a race but the BIG ONE beast got fed and NASCAR got what it wanted by scheduling this race as the final race of the regular season, a bunch of guys swinging for the fences that wouldn’t have had much of a chance in the playoffs anyway.

I actually enjoyed the race until it became a demolition derby, which was inevitable. Although a BK fan, I found myself pulling for Matty D. Kudo’s to Ryan Blaney. He picked a good time to catch fire.

I was pulling for Matty D too but his “going for it regardless of the consequences” move late in the race caused that first big one IMO.

I think the only thing I missed from my prediction last week was the severed arm. To my knowledge, everyone left Daytona with all limbs intact. Otherwise, the red flag and demolition derby from moves of desperation was pretty much spot on. But that trend is easily seen for all races at Talladega and Daytona, so it’s not really much of a prediction.

I’d like to see one set of rules and one tire compound for all the oval races, no matter where, and the same for the road courses. Let the teams figure out how to use the equipment rather than changing for every racetrack. Also eliminate so-called plate racing, or whatever it is called now, thus ending the inevitable carnage on those tracks. One more thing: get rid of competition cautions. The only thing that I see they are good for is another set of commercials for the networks.