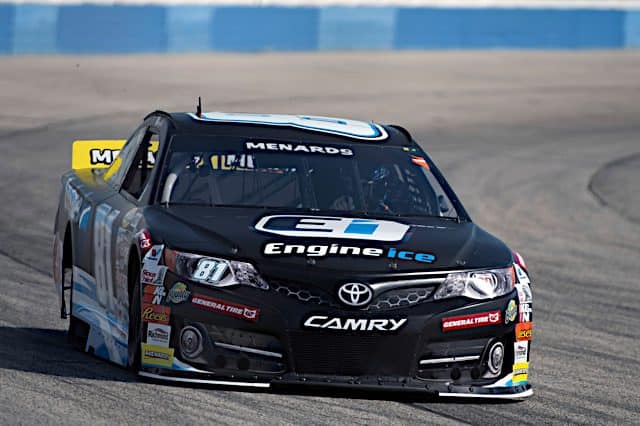 West Allis, Wis. — The 2021 Sprecher 150 was the second combination race for the ARCA Menards Series and the ARCA Menards Series East. In the first such event held earlier this season at Iowa Speedway, East points leader Sammy Smith crashed out to a DNF in 18th place. At the Milwaukee Mile on Sunday (Aug. 29), he piloted a fast No. 81 Joe Gibbs Racing Toyota and was hoping for much better the second time around.

Smith posted the fastest lap time in the practice session. Then, he qualified second, one spot behind teammate Ty Gibbs. During the 150-lap race at the 1-mile track, Smith ran inside the top five, but he, nor anyone in the field for that matter, challenged the race winner Gibbs.

“We just fought tight the first part [of the race],” Smith told Frontstretch post-race. “Then made some changes that didn’t really help. Just struggled all day really. Just can’t thank the team enough.”

Before the Sprecher 150 began, several folks in the garage said the Joe Gibbs Racing teammates were the ones to beat. While Smith briefly smiled at the recognition, he left craving more.

“I wish we could’ve done a little better,” he said. “We just didn’t have it today; we struggled but can’t thank the whole team enough.”

Gibbs has now won both combination races as well as an East standalone race at Dover International Speedway. It’s raised the competition level for Smith.

“It’s definitely tougher,” he said. “Just got waxed today by Ty; just need to be better next time.”

It’s Smith’s second top five as a teammate to Gibbs.

“It was good for Ty, good for the team,” Smith said. “Sucks we finished fifth, but we’ll move on.”

Entering the East season finale at Bristol Motor Speedway, another combination race, Smith retains his points lead. While it’s not mathematically clinched, he likely will win that title.

“It definitely says a lot about the guys that work on these things,” Gibbs said. “We wouldn’t be here without them. Sammy’s a great teammate. It meant a lot. I really like him. Hopefully, he’ll be here in the future to make this thing last.”

During the MAVTV broadcast, it was reported that the plan is to have Smith run the main ARCA series in 2022.

According to @MAVTV, the plan is for Sammy Smith (@sammysmithSS) to take over the @JoeGibbsRacing ARCA entry in 2022.

Smith won't turn 18 until June, so if this is indeed the case, expect Smith and Gibbs to split the entry, much like Gibbs and Herbst did.#ARCA

As he does not turn 18 until June, he will not be able to run the entire schedule until then.