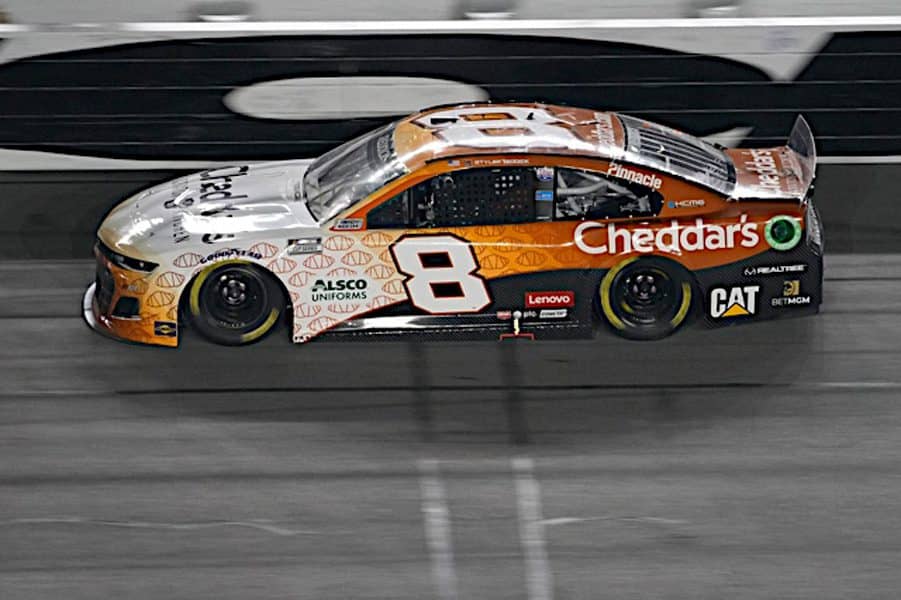 He looked off to his right where one of the track’s two scoring pylons glowed with the results of the NASCAR Cup Series regular season finale.

The number signifying Reddick, the No. 8, sat in fifth. The three numbers between his and the No. 12 of race winner Ryan Blaney showed how close he came in a wild overtime finish to not clinching the 16th and final playoff spot.

Had Bubba Wallace (second), Ryan Newman (third) or Ryan Preece (fourth) won the race, he’d have been knocked out. (Another winless driver, Chris Buescher, crossed the line second but was disqualified after NASCAR post-race inspection).

“It’s crazy,” Reddick said. “Thankfully, Ryan Blaney was able to hold everyone off, win the race and in a way keep my season hope alive. ..

“A lot happened in a matter of about 30 minutes.”

At one point in that half hour of time, Reddick sat alone on the backstretch under a red flag.

Reddick’s location was due to miscommunication over the team radio that he needed to stop following a visit to the pits.

His No. 8 team had just spent the last few minutes repairing damage to his car, a result of running into the back of Martin Truex Jr. in the middle of an eight-car wreck with 15 laps left in the scheduled 160-lap distance.

“I could tell that we had some residual oil burning off of the headers and out from under the engine compartment,” Reddick said. “We were holding pressures and all the temperatures looked good. So I knew that our car was fine.”

With that knowledge in hand, Reddick considered his backstretch siesta “kind of nice” so he could “reset” and “think about what we had to do over the next green-white-checkered.”

Reddick would then have to endure two overtime restarts and wrecks involving 11 and nine cars, to determine whether he would be playoff bound.

The Richard Childress Racing driver was a “little worried” his engine might not make it to the end, but the caution for the first wreck, which included Chase Elliott and Matt DiBenedetto, allowed him to “stay up tight in the draft, keep our nose out of clean air and survive.”

At the same time, he was trying to stay ahead of teammate Austin Dillon for the final playoff spot. By the last restart, Dillon’s only hope was to win.

That went up in smoke when Dillon was part of the melee on the final lap.

Before he could officially claim his spot in the playoffs, Reddick almost fell prey to a lack of awareness.

“I’m not gonna lie, in true me fashion I thought we were going to have another green-white-checkered when we came out of turn 4 (after the last lap crash),” Reddick said. “I was getting ready to hit pit road and (my spotter started) screaming at me, ‘Hey, man, gas it up, we got to get to the line, we’re still in seventh or sixth right now, come on.'”

Standing on pit road as a member of the Cup playoff field for the first time, Reddick said the moment represented one of “relief” rather than “outright excitement.”

“It would have been a real tough pill to swallow walking out of this place, out of the playoffs after the turnaround we’d had, running the way we were,” Reddick said. “I feel like this was the huge mountain we had to get over to kind of be in the valley of the playoffs for a while and I’m just more excited than anything for this challenge ahead.”

For Reddick, his feelings compared to one of the biggest moments of his recent adult life: the birth of his son, Beau.

“It kind of compared to how emotionally spent I was by the time my girlfriend Alexa gave birth,” Reddick recalled. “I was excited. But I wasn’t like screaming up and down for joy. I was just emotionally spent through the experience I went through for the last three or four hours. … I was just relieved. Glad it was over and glad you’ve gotten the good news. You know what I mean?

“I have to raise the playoff baby, right? Ten races to raise and groom and take care and make this little egg survive.”

I’m glad Reddick got in. But what a nerve wracking day for sure.