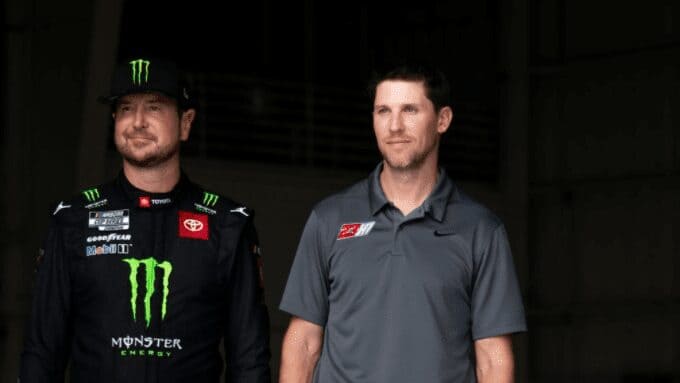 The news was trumpeted in a 37-second video posted on social media, complete with Busch stepping off a private jet and walking to the No. 45 Toyota he will drive in 2022.

“And you thought I was leaving,” Busch says over the video, ribbing the viewer.

The video was a sequel of sorts. In February, Busch and Monster Energy put out a roughly nine-minute video called “Shifting Gears” that churned the waters of speculation about Busch’s future in NASCAR, as he boarded a plane that flew into the sunset.

“I didn’t know where the future was going to be in racing,” Busch said of the first video on Saturday (Aug. 28). “And the timing and the people and the relationships are making this happen. And now it’s all telling me that this is the right place to be and it’s most likely the final spot for me in NASCAR.”

From the perspective of Denny Hamlin, when it came to 23XI Racing’s future, it “was a pretty simple decision” who the first-year team wanted to join its ranks alongside Bubba Wallace.

Who better to bring on board than a former Cup champion with more than 30 career wins, and the experience accumulated from racing for six teams and three manufacturers in Cup over the last 20 years?

“There was only one driver we talked about, and that was Kurt,” Hamlin said. “I noticed that our skill set is very, very similar. We’re good at the same type of tracks. I’ve always respected them. And that’s why I talked to him and said ‘This might be a possibility, what do you think? Forget everything else. Are you available? I want you.’ So I believe in his skill behind the wheel and also believe in his leadership inside of four walls.”

What all is in store for the 43-year-old Busch at 23XI Racing and Toyota?

Busch confirmed Saturday his agreement with the team is a multi-year deal. The 2004 Cup champion is setting himself up to be entrenched with the organization. But the “right role” for him is something he has “yet to define.”

“Toyota has asked me to do certain things with driver development,” Busch said. “Monster Energy has always asked ‘who were the next guys and girls that we need to keep an eye on?’ And then from the driver’s side of it … I feel like I have a PhD from the driving side.”

Busch later expounded on what the development role could look like.

“I want to be part of that for the young guys coming in,” Busch said. “There’s a ton of dirt racers, there’s a ton of different road course guys. And it takes a while to get used to these oval cars to get used to the trends with the setups, something I can do to help speed up the process. Because Toyota believes in me as a veteran to come and start this new team. I’ll find that role with Toyota.”

For Toyota Racing Development President David Wilson, the move to bring Busch on board feels “almost serendipitous,” with the path toward it starting with a call from Hamlin on July 8, 2020 that opened the floodgates for what would become 23XI Racing.

“He calls me and just kind of wants to talk about his future and some thoughts that he’s having,” Wilson said. “And I was really impressed by that maturity and just the conversation we had and that’s what set it off. …

“Kurt and I have become friends over the years, and seemingly kind of circling, circling the drain towards something really special. …

“It’s just a special confluence of circumstances that makes me smile.”

While Busch’s arrival at 23XI Racing may feel like a charmed occurrence like those depicted in the Monster Energy videos, the driver acknowledged there’s still many “unknowns” for the first year of their marriage.

A key to it for Busch will be instilling “an atmosphere of winning.”

“Going into the Next Generation car … even the rulebook really isn’t set yet with that new car,” Busch said. “But what I’ve learned in motorsports in any kind of situation in life is yes, you win in numbers, and to be teamed up with 23XI, who has a technological alliance with Joe Gibbs Racing and with the whole TRD family, pushing as hard as they are, to make sure that these cars will be the most successful group out on track.

“Yes, it’s all right there and I can’t wait to add my bits of information, my years of experience to make sure that the No. 45 and 23 are as best prepared each week as possible. But it doesn’t matter what’s happened in the past. This new Next Gen car will be a clean slate for everybody.”

I absolutely think this is a win win move for all concerned. I think Kurt wins next year, especially with TRD and Gibbs racing. He’s a smart car man and can still wheel the car.

I agree with you, but there is a lot of BS, hype and wishful thinking in the above press release.

I think that’s pretty much standard for any press release. lol. But yeah, this is a good move for 23XL. Kurt has proven to raise the bar at other struggling teams he has joined. Looking around the garage, who’s available (or could have been available), Kurt is the only one with the experience and maturity to take this team, and maybe eventually his own career outside of the car, to the next level.

I think the only other one at this time (besides Keselowski, already taken) with that skillset would be Kevin Harvick. It will be interesting to see how RFK Racing compares to 23XL next year, whether Brad or Kurt will have a larger influence on their respective organizations.