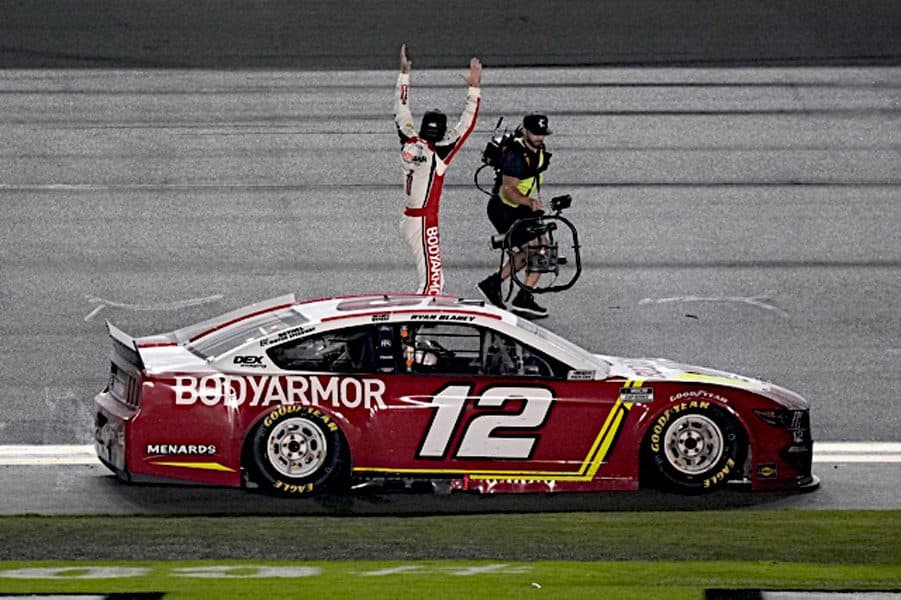 1. How much does momentum matter going into the NASCAR Cup Series Playoffs?

(Note: Blaney and I are not actually friends, having spoken exactly once, but he is a likable gent.)

The 27-year-old Team Penske wheelman entered the 2021 season never having won more than one race in a year. After locking himself into the postseason with a victory at Atlanta, you could be forgiven for thinking that might be it for him.

Then August happened, or more precisely, the last half of August. Blaney did an impressive job in holding off pretty much everyone late to claim a second 2021 win at Michigan, then managed to be in the lead when it mattered this past Saturday night at Daytona. His three victories tie him with Martin Truex Jr. and Alex Bowman for second among all Cup Series drivers.

But are those three-win seasons all created equal? Bowman last visited victory lane on June 26, Truex all the way back on May 9, or 15 races ago. The checkered flags all count the same in terms of points and playoff positioning, but there’s an argument to be made that when you win in NASCAR does actually matter.

That’s a roundabout way of saying if you had to bet your house on either Truex or Blaney to make the Championship 4, I’d rather ride with Blaney because he’s in form right now, as soccer fans might say. Of course the funny thing about momentum is that it can also make rapid swings, and if Truex wins the Southern 500 (at Darlington, the site of his last win), I’m going to immediately feel foolish. It’s going to be fun to find out either way.

2. That was some high drama for the final playoff spot

We all know that claiming the final spot in the NASCAR Playoffs is kind of  like fool’s gold. Drivers who squeak into the 16th position don’t win championships, and are most often gone after the first round.

That said, if you subscribe to the “chip and a chair” mentality that poker pros have and that all you need is the chance to see what happens, the scenarios that unfolded at Daytona for the one Cup Series postseason birth up for grabs was everything you could have asked for. Drivers like Matt DiBenedetto and Bubba Wallace ran in the top 10 quite often throughout the night, and if Blaney had been caught up in the final wreck, someone like Wallace, Ryan Newman or Ryan Preece may have ended up with a trip to the Playoffs.

Then there were the M. Night Shyamalan-esque plot twists in the Tyler Reddick–Austin Dillon teammate battle to be the last man standing in points. Just when it appeared a pit road speeding penalty would sink Dillon, Reddick got caught up in a wreck, forcing the No. 8 crew to pull off some superhuman efforts to keep his car running and stay on the track despite the damage. It paid off, as Reddick missed the final multi-care pileup while Dillon did not, somehow finishing fifth and claiming that 16th spot. As it turns out, he’s not even last but 15th thanks to the reordering of the contenders by their playoff points. Huzzah for stage wins!

Is it a meaningless accomplishment? It depends on the team. For Reddick, I’d argue it was absolutely worth fighting for, a sign that his team is moving forward year to year. And regardless of what happens to him from here on out, how he did it was anything but boring.

3. Kyle Busch is really on fire on social media this year

There’s never been any doubt that Kyle Busch has always had a keen sense of humor, it’s just that it’s often been lost behind his other, um, less pleasant but no less obvious moods. Perhaps buoyed by the fact that he is fourth in the playoff standings and has a real chance to make it to Phoenix with a shot at another title, he’s shown more of his playful side on social media this summer than ever before, and the results have been consistently entertaining.

The most recent example came last week, when ESPN accidentally sent out an alert that Kyle Busch was headed to 23XI Racing next season.

(Spoiler alert from anyone back from a weeks-long wilderness retreat off the grid: It’s Kurt Busch headed to that team.)

It was a silly mistake, and Rowdy couldn’t help but have some fun with it:

Had to address the news reported earlier by @espn, @23XIRacing @BubbaWallace this is gonna b awesome let’s get to work @Jumpman23 @KingJames @wbpictures ?? #KFBSummer pic.twitter.com/4bo4QrkaBT

Four new drivers in the playoffs this year (Kyle Larson, Michael McDowell, Christopher Bell and Reddick, to be precise) vs. 2020 means three who didn’t make it back. No, my math isn’t wrong — Clint Bowyer also didn’t return to the postseason, but that’s because he left for the FOX booth.

Dillon we’ve discussed a bit already. He has typically been good for a win a season, but he never got one this time around and ended up on the wrong end of that all-RCR tussle in points.

Hard luck Matty D. continues to … well, have hard luck. DiBenedetto teased contending for a win at Daytona, but he never was quite in the right place at the right time. We still don’t know where he’ll be racing in 2022, so this is an extra big bummer for him to be on the outside looking in.

The final non-returnee is Cole Custer, who suffered some of the sophomore slump we often see in stick and ball sports. Custer thrilled us with a surprise win as a rookie in 2020, but his performance in the 2021 regular season was just worse all around than a year ago, as evidenced by just two top 10s compared to six at this time last August. Here’s hoping he can rebound next season.

Because it could be worse. The Formula 1 Belgian Grand Prix ended after just two caution laps on Sunday (August 29). Yes, you read that correctly: The race was considered official after zero green flag laps, and Max Verstappen was named the winner of a points-paying event by virtue of qualifying on the pole.

What gives? Blame the rulebook, in this case, as F1 regulations say this is what happens when it is too wet to race. These cars can run on rain tires, but there was simply too much precipitation to run the course even with those equipped.

Pushing the race to another date is something NASCAR fans know all too much about, and it’s not much fun when it happens. The last race I attempted to attend as a fan was the spring Dover event in 2019, and it was a maddening wait to see if it would be run on Sunday — and it eventually wasn’t.

Yet despite the inconvenience or the fact that people sometimes simply can’t watch the race the next day, at least the race gets run. Given what we just saw in F1, there’s something to be said for that.

Momentum is definitely worth something. But based on past performance across the next three tracks, give me MTJ over Ryan Blaney.

When did they come up with the idea of 2 laps makes the race? Have the teams stick around another day and complete the race in the morning. That was an embarrassment and the FIA really doesn’t care (or have to care).