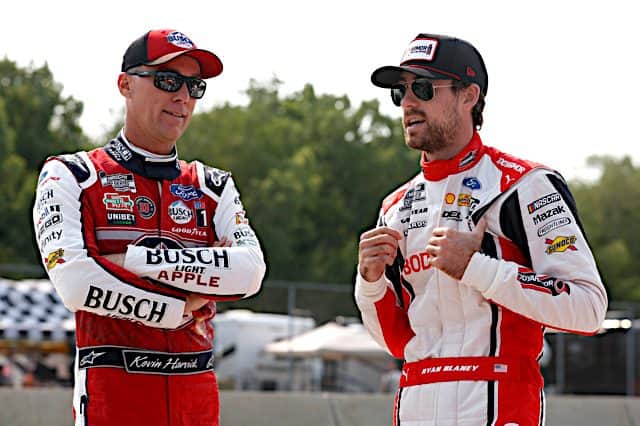 Races at Daytona and Talladega are always about surviving first and making a move for the win second. A driver can’t win without dodging the inevitable late race carnage. Ryan Blaney did both in textbook fashion on Saturday night at Daytona International Speedway, and it resulted in his second consecutive win.

It’s a new position for Blaney in terms of his contribution to Team Penske as well. Blaney has spent a lot of time as more of a supporting cast member while teammates Brad Keselowski and Joey Logano racked up race wins and contended for championships. Now Blaney is carrying the banner for the trio, and looks to be not only the best championship prospect for Penske but for Ford as well.

But enough talk about what hasn’t happened yet. Here are a few more notable numbers that did happen Saturday night at Daytona.

With Blaney’s win, Ford has won both races at Daytona as well as the first race at Talladega this season. In the past decade, only once has a manufacturer swept all four events in a single year. That too was Ford back in 2017, and those four races are part of how the blue oval folks have claimed 10 of the last 12 checkered flags at Dega. Interestingly enough, two of those belong to Blaney.

Blaney also accomplished several firsts with his win in the Coke Zero Sugar 400. It was the first time he’s won back to back races. Additionally, it was his first win at Daytona, improving on his previous high of second in two Daytona 500s, and his total number of laps led, seven, is the fewest Blaney has ever been out front on his way to a win.

Seven of the top 10 finishers picked up their best result of the season on the high banks of Daytona. Of course, winner Blaney did because you can’t do any better than first, but the three drivers who followed him across the stripe hit their 2021 high point as well. Bubba Wallace in second, Ryan Newman in third and fourth place Ryan Preece all marked season highs, as did 2019 race winner Justin Haley in sixth, BJ McLeod in ninth and Josh Bilicki, who wound up in the top 10 for the first time in his Cup Series career.

One driver who came oh-so-close to his best career finish was Corey LaJoie. The second generation NASCAR competitor led one lap, but the bigger story was how he found himself in second place on the final lap looking to better his ninth-place finish in February. Things were shaping up well, but it all came crashing down (literally) in a massive melee at the entrance to the third turn. Still, the 16th place that Lajoie was credited with equaled his third-best result of the year.

Has anyone asked Haley if he can see the air when he’s in a high speed draft? Haley picked up his fourth career Xfinity Series win in the rain-delayed Wawa 250, all four of which have come at Daytona or Talladega. Haley also has a rainout win in the Cup Series at Daytona, as well as an ARCA victory at Talladega. Throw in his sixth-place finish in the 400-miler Saturday night and there just might be something extra about those places that Haley has figured out.

Kevin Harvick may be the lowest seeded driver as the playoffs begin, but if history is any indication, he won’t stay at the bottom for long. The Cup Series heads to Darlington Raceway next weekend, and Harvick has finished ninth or better in the last 11 outings on the 1.366-mile oval, including three wins. This year has been a struggle for the No. 4 group, but if any track could make Harvick happy again, it’s Darlington.

7 of the top 10 finishers had there best result of the year. What does that tell you. All the good drivers got caught up in the wreck fest that the Daytona crap shoot is.