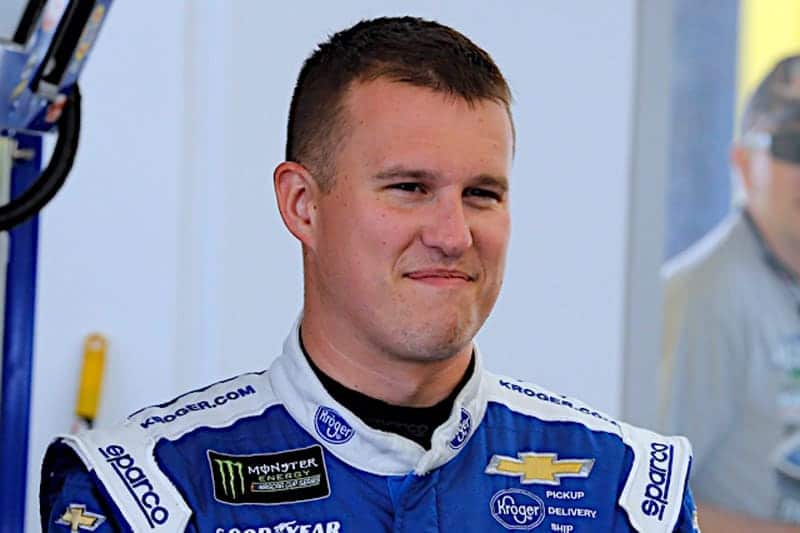 Who… should you be talking about after the Coke Zero Sugar 400?

For the second week in a row, Ryan Blaney didn’t dominate a race. He merely placed himself in the right spot to pounce on a late restart.  Then, when carnage erupted behind him, the Team Penske driver capitalized with a win.

Blaney’s third win of 2021 wasn’t glamorous, but it was the kind of race that will serve him well in the playoffs. He’s positioning himself up front late in races, and even when that doesn’t equal a victory, it’s usually good for a solid points haul. It’s the kind of racing that can send him deep into the postseason this fall.

See also
Up to Speed: Why This Year’s Cup Series Playoffs Will Be Different For Ryan Blaney

Tyler Reddick came into the race hanging onto a playoff spot on points, then almost watched it go up in smoke after he was collected in a second-half wreck. In the end, he put a damaged race car in his team’s hands to repair in time.  They got the car fixed and Reddick’s fifth-place finish cemented his first-ever playoff bid.

But it’s hard to overlook the good luck he had to get the spot and the bad luck that nearly took it. He’s struggled with bad luck in recent weeks and he needs to exorcise it once and for all if he hopes to make any kind of playoff run. Reddick’s the best driver at Richard Childress Racing, but he needs to iron out a few kinks.

And don’t forget: If you listened to the Frontstretch podcast this week, you know I gave you two underdogs to watch this week because they’re excellent superspeedway drivers: Bubba Wallace and Ryan Preece. Both of them delivered on Saturday night, with Wallace finishing second and Preece running fourth. They were both within striking distance had the final caution not derailed their chances. While it’s true that Daytona is a crapshoot, it’s also true that type of racing is a specific skill and the cream rises to the top.

In the grand scheme of things, it’s admittedly silly, but NASCAR’s announced change for 2022, where the car numbers will be moved forward to accommodate sponsors, has certainly generated a lot of talk among fans.

Commercially, it makes sense. Sponsorship is scarce, even among some of the biggest teams, and if giving them more space attracts more backers, it’s what the sport needs to do. Getting rid of contingency deals frees up the space (whether that hurts teams and pads NASCAR’s pockets is another conversation for another day) while visibility is key for companies looking to put eyes on their name and logo during a race.

As gimmicks go, it’s not the end of the world. It won’t change the racing for better or for worse, and it doesn’t cheapen titles, cause crashes or make the drivers uglier or anything tangible at all.

But to longtime fans, it still stings. Racing is a sport built on tradition, and the number placement on the door has been part of that tradition for decades. It’s just another in a string of changes that makes NASCAR look less and less like the sport they loved to the point where they felt like a part of it all, even watching from their own homes. Considering that in sports, new fans come largely from being introduced by diehards, NASCAR should be embracing those fans and not alienating them further.

Where… did the other key players wind up in the Coke Zero Sugar 400?

Pole sitter Kyle Larson’s race was going OK until it wasn’t. His race recap reads like about half the grid: he started in the back of the field after too many pre-race inspection failures, then he moved up to the front, scoring a fifth-place finish in stage two. In stage three, he was caught up in a late-race incident with eight of his closest friends.

The wreck that swallowed Larson was both completely predictable and especially hard to take as it happened on the final lap and should have been avoidable.  Larson was scored in 20th in the final tally, just one of the dozen cars that didn’t finish out the day due to crash damage.

Daytona 500 champion Michael McDowell missed the carnage Saturday night, but that’s because his race was over early. He suffered an engine failure on lap 23 and was credited with a 39th-place finish.

Austin Dillon entered the race on the outside of the playoffs looking in and he did everything possible to grab a last-minute spot. Dillon had a strong run going, and after stage points were awarded, needed to gain 19 markers over teammate Reddick. When Reddick suffered damage in a lap 147 incident, it looked as though Dillon might have the hole he needed, but Reddick’s team made repairs and survived. Dillon might have made a run at the win and subsequent playoff berth, but he was tangled in the final crash while Reddick scored a top-five finish, leaving Dillon outside the cutline.

When… was the moment of truth in the Coke Zero Sugar 400?

Superspeedway races are their own animal (thank goodness for that), and the current package might produce tight racing with unpredictable results, but it’s also too unstable in the air. The tight packs ensure that when something happens, it collects multiple cars, and the aerodynamic package makes it harder to avoid. Sure, if one car gets into another, it’s going to go around at the big tracks, but lately, it doesn’t even take a bumper to do it. Take the air off a car at the wrong spot and the result is the same as if bumpers had touched.

Hopefully, the new cars will correct this problem, because drivers should be able to use the draft to their advantage without touching off a multi-car crash with the air. If they touch, fair enough (well, not really, but you get the gist). Clearly, NASCAR needs to fix this problem or come up with a package that discourages huge packs of cars.

The Cup Series heads to Darlington Raceway next weekend for the Southern 500. Not only does NASCAR’s original superspeedway kick off the playoffs, but the Southern 500 is one of the most prestigious races on the circuit, along with the Daytona 500 and Coca-Cola 600. Everyone wants to win it.

Put that together with playoff drivers fighting to guarantee advancement and non-playoff drivers with an ax to grind, throw it all together on Darlington’s unforgiving confines, and there are several potential players. Sunday night (Sept. 5), it’ll come down to who can dance with the Lady in Black to make it to victory lane.

It won’t look like Daytona, but rather a grinding race of strategy and flirting with Darlington’s distinctly different corners. The Lady only gives her favor to one driver; the rest slink home to lick their wounds.

How… are the playoffs shaping up?

Who should you expect to go deep in the 2021 playoffs and who’s more likely to make a quick exit? The first round is generally the one that weeds out drivers who were never going to contend for the title, even though they may have had a solid season. Look for an early exit from McDowell, whose team doesn’t have the money to put up a title bid, and Aric Almirola, who’s struggled this season.

From there, though, it’s not as easy to pinpoint the weakest links. While Reddick clinched his spot at the 11th hour, he’s been mostly consistent this summer. Still, he’s had some struggles at exactly the wrong time, so he’ll have to turn up the wick to advance.

The last spots can come down to a few factors, though. A finish in the back of the pack, regardless of fault, is almost a death knell, and two bad finishes with no win to negate them almost always spells elimination. A string of mediocre results can do the trick as well.

Drivers entering the playoffs with no momentum to speak of include Alex Bowman and Kevin Harvick. Harvick has no wins this season and Bowman has three, but all came earlier in the year. Kurt Busch’s numbers suggest he’s vulnerable, too, but he’s had a solid enough summer that he could go further. Christopher Bell wasn’t consistent enough all year to point to title contention.

On the flip side, some drivers certainly look like they could go deep into the title run if things go their way. Larson has been fast everywhere, of course, and it’s hard to count out any of the Joe Gibbs Racing veterans. Blaney has heated up and teammate Joey Logano has been consistent, which got him to the Championship 4 in 2018. (The rest is history).

Just don’t count anyone in or out before the checkers fall on each eliminator. As we saw last year, there are no guarantees, and too many factors to write any checks or punch any tickets home before that.

thankfully no one got airborne in any of those wrecks.

Way to go Amy. You looked into the future and saw that two wrecks in the final 15 laps would allow bubba to show his speedway skills by driving from 20th to 2nd. Masterful job.