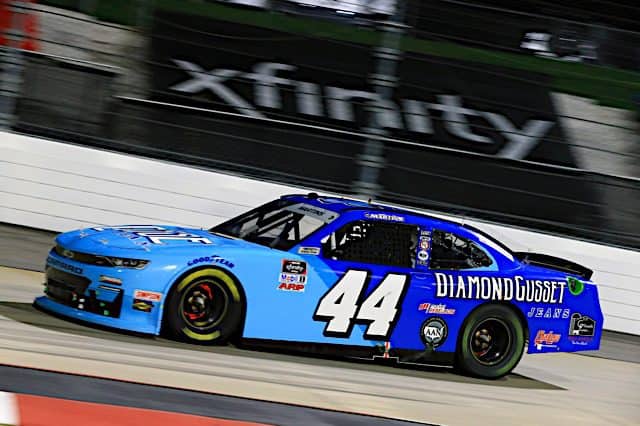 Tommy Joe Martins and Caesar Bacarella have teamed up to create a new NASCAR Xfinity Series team called Alpha Prime Racing in 2022. It has signed Rajah Caruth for a part-time schedule next season, the team announced Aug. 30.

Caruth will pilot the No. 44 car, which Martins drove this year for his own team. Martins previously said he would step away from full-time competition in the car.

Bacarella, who ran in several Xfinity races so far this season, is listed as Alpha Prime’s CEO. He and Martins will both run part time in the car next season.

“I mentioned my dad and Rodney [Riessen, co-owner of MMS] wanting to take a step back and proposed the idea of a partnership,” Martins said in a release. “It’s a perfect situation for both of us. He brings so much business knowledge and marketing savvy to the table for us, and obviously I’ve been through the school of hard knocks racing wise. I think we complement each other really well.”

“I’m extremely honored to have the opportunity to continue my progression as both a racer and a young man in the NASCAR Xfinity Series in 2022 with Tommy, Caesar, and Alpha Prime Racing,” Caruth said. “I’ve had the great fortune of having such great people surrounding me thus far in my career, and i’m ecstatic to add some more to that circle with APR.”

“Rajah is the future for us,” Martins said. “I’ve had the privilege of getting to know him and his dad, Roger, over the last few months and they are exactly the type of people we want to be a part of Alpha Prime Racing. Rajah has his whole career in front of him. I’m just honored they trust us to be one of his first steps.”

Martins sits 18th in the driver points standings and had a best finish of 11th at Talladega Superspeedway. He has one career Xfinity top 10.

Alpha Prime’s full schedule details are yet to be announced.