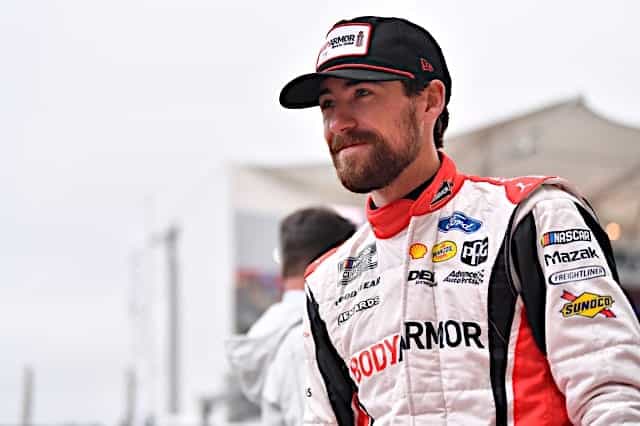 In keeping with his pattern of dramatic race victories, Blaney surged into the lead on the first lap of an overtime restart with a big push from Corey LaJoie.  Blaney then held the field at bay until a crash on the final lap ended the race under caution.  The victory is Blaney’s first at Daytona in a full field Cup Series race.

Blaney’s recent wins have come at a crucial point in the year as Michigan and Daytona happened to be the last two races of the regular season.  These races were the final two chances for drivers to either punch their tickets to the postseason or add to their playoff point totals.

Blaney was not racing for a berth himself; a win earlier this year at Atlanta Motor Speedway effectively locked him in.  But when it comes to playoff bonuses, Blaney made out like a bandit in the last two races.  Prior to his Michigan win, he had banked nine playoff points: five from the Atlanta win and four from stage victories.  Additionally, he was eighth in total points, a position that awards an additional three playoff points once the regular season ends.  Given those totals, it appeared Blaney was going to begin the postseason somewhere in the middle of the pack.

Two weeks and two wins later, Blaney finds himself tied with Martin Truex Jr. for second in the reseeded playoff grid with 24 playoff points.  Not only did he get five bonus points from each victory but he also leapfrogged Truex and Joey Logano in the overall standings to conclude the regular season in sixth.  That gave Blaney five additional playoff points instead of the three he would have earned by finishing eighth overall.  No longer mired in the middle of the playoff field, the No. 12 team has bolstered its chances to make a deep playoff run.

For a driver who has sometimes struggled to put complete races together, Blaney’s last two wins have completely changed his outlook for the playoffs.  He’s still not one of the title favorites, but he does have some extra weapons to face what might be his biggest postseason challenge – the first round.  It’s not that Blaney is incapable of beating four of the other 15 playoff drivers over the next three races.  Rather, the tracks themselves are the problem.

Darlington Raceway, the first stop of the playoffs, has not been kind to Blaney.  Until earlier this season, he had never scored a top 10 at the Track Too Tough To Tame.  His numbers at the second playoff venue, Richmond Raceway, are even worse.  In 10 starts at Richmond, Blaney has never scored a top-10 finish and has placed 15th or better only once.

The first round of the playoffs then concludes at Bristol Motor Speedway.  Blaney has generally shown more strength there, having led at least 60 laps in four of his last six starts at Thunder Valley.  But many of Blaney’s best runs at Bristol have been spoiled by bad luck and untimely crashes, causing him to have finished in the top five only once there.

Last year, the round one playoff trio of Darlington, Richmond and Bristol was too much for Blaney to overcome.  Taking 13 playoff points into the postseason (which placed him seventh on the playoff grid), a 24th-place result at Darlington knocked him down to 15th in points.  He lost even more ground after finishing 19th at Richmond.  Needing either a win or a really good points day to keep his championship hopes alive, Blaney could only muster a 13th at Bristol and was eliminated from the playoffs.

It was a discouraging result for Blaney and the new No. 12 team led by crew chief Todd Gordon. Gordon was a former champion with Logano; his pairing with Blaney had the potential to take their team much deeper into the playoffs.  To add insult to injury, both Logano and Brad Keselowski, Blaney’s Team Penske teammates, reached the championship race in 2020, though neither of them won the title.

Nearly a year later, Blaney is suddenly looking like the best hope for Penske to win the 2021 championship.  All three Penske drivers won fairly early in the season, but the organization has been quiet over the summer.

While Logano has been the highest Penske driver in points for most of the year, the No. 22 team has struggled lately.  After the doubleheader weekend at Pocono Raceway, Logano was fourth in overall points.  But in the seven races since then, Logano has finished in the top five only once.  He hasn’t even scored a top 20 in the last four races.

Keselowski, meanwhile, has been on a slow fade since his Talladega Superspeedway victory in April.  Heading to Roush-Fenway Racing to become an owner/driver next year, it is difficult to see him as a serious championship contender in these remaining 10 races with Penske.

With Logano in a slump and Keselowski preparing for his future with a new team, Blaney is in position to carry the banner for Penske in the 2021 playoffs.  He has advanced to the Round of 8 twice before, but in both years, a lack of playoff points prevented him from being anything more than a longshot when compared to his competition.

Expect things to be different this year.  Blaney will begin the postseason with his highest playoff points total by far, ahead of more than most of the field.  He has additional experience with his team and a bigger cushion over the cutline just in case things go wrong in the first round.  Throw in momentum from recent wins and Blaney’s playoff ceiling is much higher in 2021 than it has been in past years.

Perhaps now is when Blaney transforms from occasional winner to true championship contender.