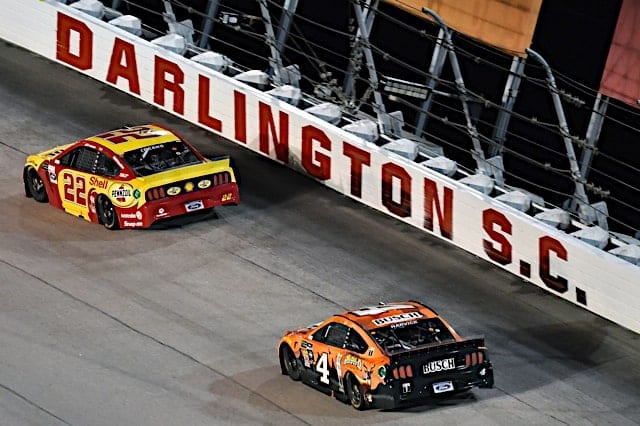 Darlington Raceway is an obvious historic landmark for NASCAR.

That is part of what makes the 71-year-old facility the perfect start of the NASCAR Cup Series playoffs, which kick off at the 1.33-mile South Carolinian oval Sunday (Sept. 5) with the 72nd annual Cook Out Southern 500 at 6 p.m. ET.

Although the 10-week playoffs have been in place since 2004, there is still something inherently modern and new that comes with a postseason in racing, particularly since this elimination-style format wasn’t introduced until 2014.

Add in the new Next Gen car on the horizon, and Darlington marks a true intersection of NASCAR’s past and future.

“You look at Darlington, and it’s old school,” Kerry Tharp, track president of Darlington, told Frontstretch on Monday (Aug. 30). “It’s a lot like the Wrigley Field of NASCAR. I think that being able to be old school and yet introduce the Next Gen car is a great match. […]

“Being able to marry up something historic and old and rustic with something that’s new, I think it’s the best of both worlds.”

This year also marks the first since 2004 that Darlington has been scheduled to host two separate Cup weekends in the same season. The series raced there three times in 2020, but two of those three were added due to schedule realignments following the COVID-19 shutdown, including the sport’s return in May.

NASCAR’s decision to make multiple trips to “The Lady in Black” official continues the track’s resurgence to relevance. It’s a far cry from the mid-2000s when the track lost its traditional Labor Day Sunday slot for the Southern 500 in 2004 in favor of Auto Club Speedway (2004-08) and Atlanta Motor Speedway (2009-14).

“When we got our Labor Day date back in 2015 and introduced the throwback weekend, I think that was really the shot in the arm that Darlington needed,” Tharp said. “And then I think that in 2020, when we hosted the first live sporting event after [and] during the pandemic, and then follow that up with another event there, Labor Day was I think just further indication that Darlington was here to stay and was worthy of having two events on the schedule.”

The return of two race weekends, Tharp said, is a critical economical boon for the state and community and has been warmly received by all near the facility.

“It means a lot of state from an economic standpoint and tourism standpoint, and it’s a big event on the schedule and certainly for the state of South Carolina,” Tharp said. “We get fans from almost all 50 states and about 10 or 12 foreign countries. The economic impact of two race weekends approaches $100 million a year in direct and indirect economic impacts.”

With a second NASCAR race weekend came the realization that drainage issues in turn 2 of the speedway needed to be properly addressed.

Tharp explained his crew had had to “piecemeal” part of the track following events for at least the last three years. And once the facility secured a second date, Tharp said it was time to take a closer look into the situation. After help from NASCAR, Daytona International Speedway’s design and development team and a highway and asphalt expert, the decision was made to repave turn 2 from the exit of turn 1 through the entrance of the backstretch.

“They all recommended that a long-term solution would be to go up there and repave a larger section of the track,” Tharp said. “And it’s about 600 feet long, about 32 feet wide. They finished it up about three weeks ago. It has not changed the banking or the geometry of the that turn at all. I think it will have minimal with any impact on the racing.

“I talked to one of the drivers a few weeks ago, Kurt Busch. He thinks it might even cause it’s racing to be a little bit more slippery up there coming out of that turn. There’s no practice, no qualifying, so it’ll be interesting to see them hit that turn and what kind of response we get.”

”Turn 2 is where your lap time is made, and if you get through there good, it’s really going to help with that,” Busch, the 2004 Cup champion, said. “Now with the extra grip, there is going to be a ton of speed down the back straightaway into turn 3, and there could be a question if we are up against the rev chip. So, you might have to back off the throttle to preserve the engine. With this being the second longest race of the year, that could be a huge factor at the end of the race as far as durability.”

Myriad factors make this weekend’s race one to look forward to. The first 26 weeks of the NASCAR season have arguably produced some of the most compelling storylines in the playoff era. That added momentum lifts the sport as it travels next to Darlington.

“I think that just makes it even more interesting,” Tharp said. “The amount of drivers that have been performing well across the season is kind of going in ebb and flow, so I think it’s imperative someone gets off to a good start in the playoffs.”

So what should a first-time fan expect in their first visit to the track notoriously too tough to tame? Tharp said not to expect frills but instead a throwback to days gone by.

“I like to tell people this: I don’t think we’re the fanciest place. We may not be the most modern facility you’ve ever been to, but I think we’re the coolest place that you could ever come to for a NASCAR race,” he said. “And when you come through the gates and come through the property, you just get that feel of, wow, all the history that’s been going on here.

“When you think about the drivers that have won here — David Pearson, Dale Earnhardt, Cale Yarborough, Bobby Allison, Richard Petty, Jeff Gordon. They’re all Hall of Famers. It’s a proving ground for great driving. And I think if you took a poll of the drivers of what one of their favorite tracks to come and race and one of the best that they would love to win, it would be Darlington.”

The Cook Out Southern 500 begins at 6 p.m. ET on NBC Sports Network and on radio on Motor Racing Network.