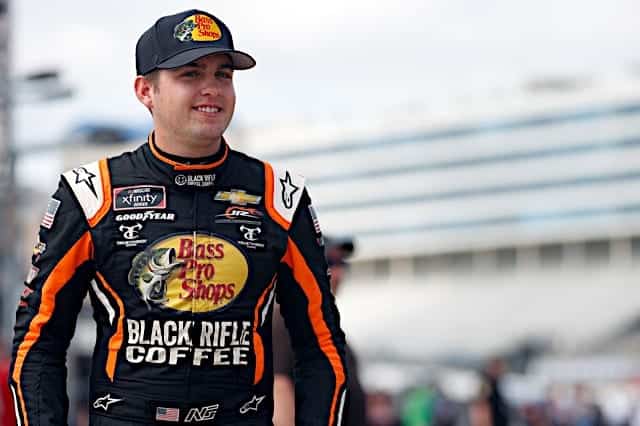 Unlike NASCAR’s other two national series, the playoffs won’t be underway this weekend in the NASCAR Xfinity Series. That won’t start for another three weekends from now at Las Vegas Motor Speedway, after events at Darlington Raceway, Richmond Raceway and Bristol Motor Speedway.

Even if most of the field is set for the postseason in the Xfinity Series, the season now enters a three-race stretch where a driver can cast themselves as a favorite to make a run for a title based on how these next few weeks go.

For sure, drivers like Justin Allgaier, Austin Cindric and AJ Allmendinger would be favorites based on each winning multiple times already this season. Behind them is where it gets really interesting, where dark horses could rise from the fray.

Despite not having won a race this season, Noah Gragson, currently eighth in the series points standings, has to be among them.

OK, it might sound ludicrous that Gragson would be mentioned as someone primed to make a run, but not when you look at multiple factors.

One is the recent trends. Back in the early summer months, the sky appeared to be falling for the No. 9 team with three races in a row at Circuit of the Americas, Mid-Ohio Sports Car Course and Charlotte Motor Speedway being marred by an engine failure and a pair of DNFs due to crashing out. Those days are a distant memory.

In his last 10 races, Gragson has been outside the top 10 just once, that being a 14th-place finish at New Hampshire Motor Speedway. Otherwise, Gragson has quietly been among the more consistent drivers in the NXS garage. In fact, in the last six races, Gragson has finished no worse than seventh in all but one race, posting three top-five finishes, the best being third at Michigan International Speedway and Atlanta Motor Speedway.

But the reasons for Gragson being dark horse go beyond what’s happening on the track.

Earlier this week, Gragson got the best news that any driver could get from their race team: belief in them from their car owner. JR Motorsports announced on Tuesday (Aug. 31) that Gragson would be back with the team for a fourth season in 2022, making it public to everyone that he’s locked in for another season in the No. 9 out of the JR Motorsports stable.

The timing could not be much better for Gragson. In a time of the season when momentum is everything, what better way to give a driver a strong head of steam going into the most pivotal time of the season than taking a burden off of their shoulders, removing any public questions of where a driver will race the next season?

Intentional or not, the timing of Gragson being extended could be just the ticket to elevate Gragson’s title hopes at exactly the right time.

It also makes JR Motorsports a team with arguably the most diverse driver lineups for next season. It’s hard to find drivers with much more different backgrounds than what this race team is putting in place for 2022. It really harkens back to Darrell Waltrip and Tim Richmond, two drivers with very, very different approaches and paths to NASCAR, being Hendrick Motorsports teammates in the middle part of the 1980s.

You’ve got two series veterans at JR Motorsports, Justin Allgaier and Michael Annett, two drivers with plenty of races to their name but still chasing a championship, although Annett’s hopes this years have been banged up due to injury.

Then it gets really intriguing. You’ve got a younger and chomping at the bit driver like Gragson from way out west in Las Vegas, Nevada. Josh Berry? He’s a straight-up throwback to a bygone era, having worked his way up by dominating short tracks to get an opportunity, one that continues to pay off for the Tennessee driver week after week.

Gragson has a bright future in this series, and it’s shining even brighter after the faith being put in him by JR Motorsports.

Recent history could provide clues: If you’re a fan of JR Motorsports drivers, very recent history could bode well this weekend. When the series last raced at Darlington, four JR Motorsports cars were in the top seven finishers. Given that this race will also be run in daylight hours, look for crew chiefs to refer heavily to notes from this past spring at the track “Too Tough To Tame.”

Moving Time Is Now For Annett: Can Michael Annett rally back? We’re about to find out. Despite missing time due to injury, Annett is 68 points shy of the final playoff spot, currently held by Riley Herbst. By all accounts, a trip to the postseason is Herbst’s to lose, but if he slips up, Annett could benefit, especially given that he was seventh at Darlington last May.

Look for an eager Austin: The latest driver to step into the rotation for Jordan Anderson Racing’s No. 31 will be Austin Dillon this weekend. Given that he narrowly missed the NASCAR Cup Series playoffs, look for Dillon to be bound and determined to prove this weekend that he’s not about to fade into the limelight over the final months of the season.