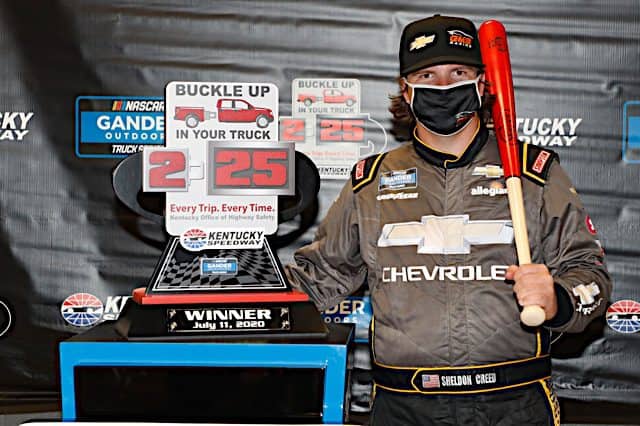 Fire is often said to be a driver’s biggest fear, but rain ought to be a close second.

As seen in last week’s Belgian Grand Prix, unwanted precipitation can bring things to a soggy end and ruin everyone’s day in a hurry. Fans at Spa-Francorchamps were treated to a two-lap parade under the safety car before competitors were brought to the garage area for good to mark the shortest-ever Grand Prix in the existence of Formula 1.

What about NASCAR, though? Every now and then, rain-shortened races make unwelcome appearances at NASCAR events, even continuing into this year as Mother Nature occasionally unleashes her fury. In light of what happened this past weekend in F1, I took a look at some of the shortest events in NASCAR history cut short by rain.

The 1992 NASCAR Cup Series season was already a crazy one, but the Bud at the Glen race weekend in New York added another level of craziness.

Davey Allison was still recovering from his major tumble at Pocono Raceway, while points leader Bill Elliott was looking to make big gains on the rest of the competition. In practice, Greg Sacks gave everyone a shock when he flipped his No. 41 Chevrolet over the barrier in the esses; thankfully, he was unhurt. It was also the final road course start for Richard Petty, while four drivers made their Cup debuts: home-state hero Todd Bodine, Scott Sharp, Ed Ferree and Denny Wilson.

Front-row starters Dale Earnhardt and Kyle Petty brought the field down to the green flag. Earnhardt led the first 10 laps until Ernie Irvan came along to steal the lead from “The Intimidator.” Petty overtook the lead from Irvan after a crash by Bodine on lap 19. They both combined to lead 38 laps, but Petty took full command by the halfway point.

On lap 51, the dark clouds closing in on the track finally dumped all the rain that was stored in them. With the red flag never to be rescinded, Petty was awarded his fifth career win and his second win of 1992. By distance, it is still the shortest Cup race in the current era, clocking in at 125 completed miles.

Cale Yarborough was a name to be feared in the late 1970s. He had just won his first career Cup Series championship in 1976, and was looking to make it two in a row in 1977.

The South Carolinian began the year with a runner-up finish at Riverside International Raceway and a win in the Daytona 500, his second of four victories in the event. The Cup Series then swung into Richmond Raceway for the third race of the season. He qualified seventh but was able to get his first taste of the lead by lap 33 and secured it for good by lap 166.

Yarborough held the lead for the next 80 laps until … you guessed it. Rain fell onto the speedway and continued to worsen. By lap 245, the race was called after 132.8 completed miles, and he was awarded his second victory in the first three races of the year. The win added more momentum to Yarborough’s pursuit of his second straight championship, with a third title coming in 1978.

The Richmond 400 featured just about all one could expect from a typical short track event. There was close racing, plenty of spins and wrecks with the top dogs of the series swapping the lead. Darrell Waltrip, Morgan Shepherd, Joe Ruttman, Benny Parsons and Dale Earnhardt all combined to push their way out front during the first half of the race.

After the midway point, Ruttman had gotten out front and was threatening for his first Cup win. But he crashed out of the lead on lap 245, leaving scorers scrambling to find out who the new leader would be after some drivers pitted. (Ruttman would wind up never winning a Cup event in 225 career starts).

Among those in front was Dave Marcis, enduring a 137-race winless streak that dated to his victory in the 1976 Dixie 500 at Atlanta Motor Speedway. As soon as scorers determined him as the leader, down came the rain. The race was called on the 250th lap with 135.5 miles complete, giving the 40-year-old Marcis his fifth and final career Cup win in one of the earliest races televised by ESPN.

The NASCAR Xfinity Series had only raced in Canada one time, but a tradition was beginning to brew north of the border.

In 2008, the series was invited back to Circuit de Gilles Villeneuve in Montreal, Quebec, for the second annual running of the NAPA Auto Parts 200. For many Canadian racers, it was their opportunity to shine bright in front of their home fans. Unfortunately, the sky on race day wasn’t so shiny.

Scott Pruett and Max Papis brought the field to the green flag with rain looming in the area. By lap 8, it struck. Because of this downpour, teams had the chance to put on rain tires for the first time ever in the series. Drivers continued on as best as they could with the limited visibility they had. Using an off-cycle pit strategy, Ron Fellows became the leader at lap 42.

The call proved to be a good one, as by lap 47, the weather was deemed too bad to continue driving in. One lap later, the red flag flew. At 130.1 completed miles, NASCAR called the remainder of the race off, giving Fellows his fourth and final career Xfinity win — all of them coming on road courses.

Defending Camping World Truck Series champion Sheldon Creed is currently on the hunt once again to collect another title. But in the first half of 2020, that championship-winning caliber didn’t appear to show. The turning point came when the series came to Kentucky Speedway to run the Buckle Up in Your Truck 225.

Creed qualified eighth while teammate Brett Moffitt took the pole. Moffitt led the first 25 laps, soon to be split with Zane Smith, Matt Crafton, Parker Kligerman and Ben Rhodes. But Creed waited patiently for his truck to come to him. On lap 51, he overtook the top position from Rhodes.

That’s when Mother Nature tapped in to provide a little extra assist. In this current era of NASCAR racing, races can be called either by the halfway point or the completion of stage two, whichever comes first. In this rare occasion, the latter happened. As soon as Creed took the green/checkered flag on lap 70, the rain fell down onto Kentucky Speedway and did not let up. After 71 laps and only 106.5 miles complete, Creed finally became a Truck winner in his 37th career start.

Seven wins and one championship later, we’re bound to see much more out of the California driver in the years to come.