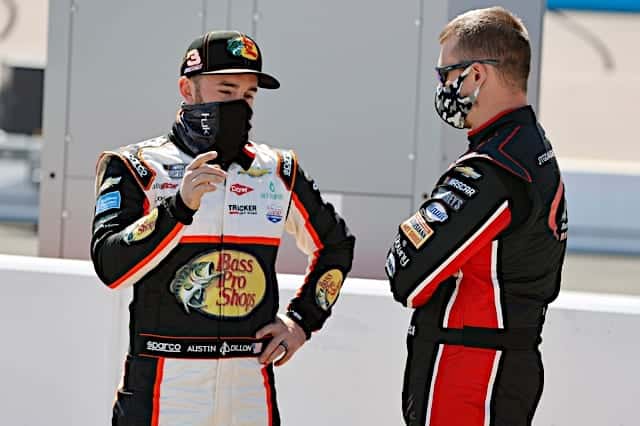 When do non-playoff teams start preparing for next year now that they’re not eligible for the championship? Riley H. – Grand Rapids, Mich.

About two days ago. Literally as soon as the car arrived back at the shop, most NASCAR Cup Series teams who missed the playoffs likely have focused any and all efforts on 2022, developing their specific programs with the Next Gen car.

For an organization like Richard Childress Racing, though, things may be a bit murkier. Could Tyler Reddick win the championship and make a run to Phoenix Raceway? It’s entirely possible, but not too likely. Do they then use Austin Dillon to try and test certain things for next year (if that’s even possible) or use him to help Reddick advance though the playoffs?

It’s a tough balance. But for teams like Roush Fenway Racing, JTG Daugherty Racing, Trackhouse Racing Team, 23XI Racing, etc., it’s just common sense to look ahead. Sure, focusing on the here and now, be it incremental gains in performance, confidence, speed, etc., on track in 2021 is important, but it’s not going to necessarily get you anywhere long-term. And that’s where most teams should be looking now: down the road to 2022 and beyond.

Running well to close out the final 10 races is great, but does nothing in the grand scheme for this year. The best a non-playoff team can finish is 17th in points, which ain’t nothing to write home about. It’s definitely a goal to shoot for if you’re the Nos. 3, 42 or 23 team, perhaps, but why put any stake into the remaining two-and-a-half months when you know it really won’t make a difference when the checkered flag flies at Phoenix?

It may be blunt, but for those outside of the playoffs, running well doesn’t matter for 2021. All the focus should be on preparation for next season, one filed with unpredictability like no other.

Let’s run down what we know, shall we?

As for Justin Allgaier and Michael Annett, it’s still unclear what their future holds. Conventional wisdom would suggest Allgaier will return to the No. 7 with support from Brandt, and as the almighty Bob Pockrass of FOX Sports speculated, JRM (as well as Pilot/Flying J) would like to see how Annett progresses from his leg surgery.

JRM could be five cars next year. Have announced Berry, Mayer and Gragson. Would expect Allgaier to return. My guess is everyone wants to see how Annett continues to heal. https://t.co/4eTiLXLD1e

There’s also the question of if either driver would like to continue racing in the NASCAR Xfinity Series. Allgaier is on the record of wanting to finish his career in the series running for JRM, holding no real aspirations of moving up to Cup for a second hurrah. Whereas Annett, as harsh as it is, has significantly underperformed for years in top-tier equipment, but has family backing.

Dale Earnhardt Jr. and Kelly Earnhardt Miller have made it clear that running five full-time cars is certainly a possibility. And given the sponsorship in place for Allgaier and Annett, that may be a probability.

It sure would be a sight to see, with the last NASCAR team (to my knowledge) running five full-time cars in Xfinity was RCR in 2017. That was the only year Childress’ NXS program has gone winless since its return to full-time competition in 2012.

A mix of young drivers in Mayer and Gragson with savvy veterans like Allgaier, coupled with a hungry short track racer in Berry could make for a melting pot of epic proportions at JRM next season.

With talks of the organization going full-time Cup Series racing in 2022 cooled off and dismissed, a five-headed monster in Xfinity next season could very well be the next challenge for the team to tackle. If I was a betting man (gamble responsibly, people), I’d say it happens.

Davey Segal is one of Frontstretch’s lead reporters, our Video Editor in charge of YouTube content and does a TikTok recap every week on his Twitter feed. Check out his latest work here.

Have Annett’s father keep sending the checks while he takes the year off to “rehab”. Then the 1 may actually be competitive again. But not sure whether 4-5 cars addresses the basic problem that they face – that they find themselves behind the Penske 22, the heavily tricked up Gibbs 54 (but still on par with the “lesser” Gibbs cars), and now Kaulig as well. Jr. always says he encourages his crew chiefs to use every trick in the book, but it seems they need a new book to keep up now.

Today I learned there is no 4-team limit in the Xfinity series, like in Cup.