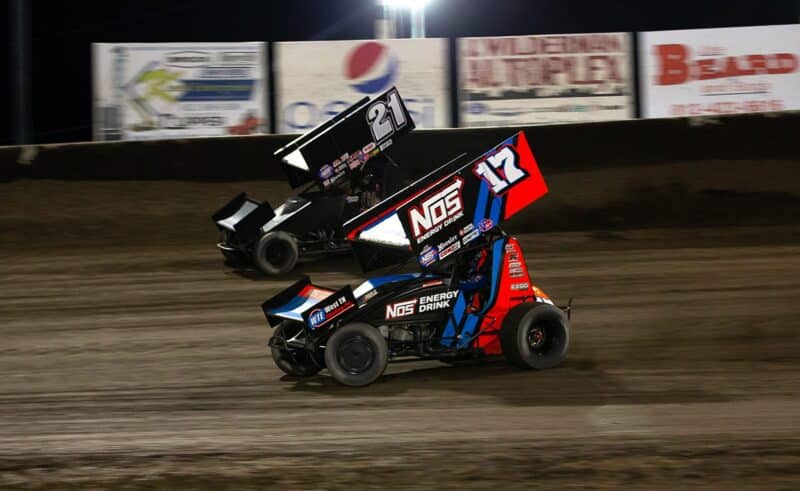 The youngest Haudenschild tops elder Dakotan Donny Schatz to win the Rushmore Outlaw Showdown, while the smallest field of cars the midweek has to offer puts on a big-time show in Iowa.

Besting Donny Schatz on the opening lap of Sunday’s feature, Sheldon Haudenschild wired a $10,000 win in a caution-filled race, scoring his eighth win of the 2021 season after surviving a two-lap shootout after James McFadden flipped on lap 29.

. @dirtvision REPLAY: @Haudenschild_17 holds off @DonnySchatz on a late-race restart to take the victory tonight at @BHSpeedway! pic.twitter.com/uCFrKYkmld

For Haudenschild, the win was remarkable on two fronts; the No. 17 team was forced to change an engine after motor heat on Sunday, and that it capped a banner weekend for the Haudenschild family; his father Jac won the 410 sprint car feature at Wayne County Speedway in Ohio on Saturday night.

Spotlight: Texas Monday Series
Where: Texas Dirt Track – Fort Worth, Texas (streamed on RaceXR+)
Why We Chose It: Monday’s only streaming dirt race.

With outlaw modified points leader Rodney Sanders absent, the winner was different, though the result was the same. There was plenty of racing for position throughout the top 10, but Las Cruces, N.M.’s Jake Gallardo ran away and hid during Monday’s $2,500 feature, leading all 25 laps from the pole. Runner-up Lance Mari closed the gap in the final four laps of the feature, but never challenged for the win.

Jake Gallardo got it done! He picked up his first Texas Monday Series win in Round 8 of Outlaw Modified! #TMSatTMS pic.twitter.com/5Qg5rGV3Fu

With Stewart Friesen absent, modified powerhouse Matt Sheppard made comfortable work of the modified field on Tuesday night, leading all 50 laps to score the win at the Thunder Mountain Speedway, his fourth tour win of 2021 and one that allowed him to extend his points lead in the series.

Though Sheppard did have several bouts with lapped traffic, the leader got relief from traffic on several occasions with how the cautions fell throughout the event. Most notable, the race endured lengthy stoppages for two seven-car pileups that blocked the track on laps 20 and 21, consecutively.

Spotlight: 2021 Season Championship
Where: 300 Raceway – Farley, Iowa (streamed on RaceXR+)
Why We Chose It: With the Super DIRTcar Series at Bloomsburg rained out, Wednesday’s only streaming dirt race not requiring a pay-per-view purchase.

The race of the midweek came courtesy of an eight-car late model field in Iowa. In a race that saw the two track title contenders racing with the championship on the line, Wheatland, Iowa’s Justin Kay got alongside Matt Ryan in turn 2 on the final lap of the 25-lap feature, making a clean pass in turns 3 and 4 to win the points-paying season finale Wednesday night.

How is this for the Late Model finish? pic.twitter.com/jyf1kgjzMH

Though Kay was able to steal the $500 win, Ryan secured the track championship with his second-place finish (more on that later). The battle for the win featured about as good a duo of nicknames as dirt racing has seen in 2021, with the “Flying Farmer” besting “the fastest art teacher on Earth” if the RaceXR+ PA stream was to be believed.

Haudenschild besting Dakotas-native Schatz to win an Outlaws race in the Dakotas is solid enough an accomplishment, but the series’ official recap of the race shed more light on just what went into Sunday’s win. Worth a read.

Bernard, Iowa’s Timmy Current had the victory lane interview of the midweek, hands down, after winning Wednesday night’s IMCA modified feature in Farley. Swearing, size jokes about sponsor decals and forgetting to thank his wife until after the track PA announcer was walking away, entertaining stuff.

Macedo suffered a flat tire on lap 17 of a 30-lap feature while running third, changed the tire, went back out, then cut another tire on lap 26 after knocking on the door of the top five again. Plus, consider the circumstances.

Macedo lost his own nerf bar and cut his own tire down. That is shit luck.

Zeb Wise has had a truly rough and tumble summer racing sprint cars on the All-Star Circuit of Champions tour, and while this wasn’t the hardest wreck he’s endured in 2021, it was definitely the most spectacular.

Zeb Wise tweeted that he was OK after this scary looking wreck in tonight's #ASCoC program. #FloAllStars

Black Hills Speedway was about as cruel to Kasey Kahne and his race teams as any track could be on Sunday night. Lap 21 saw Kahne forced to retire his No. 83 Roth Motorsports ride. Lap 22 saw both Kasey Kahne Racing cars of Sweet and McFadden forced to the pits to change flat tires. And lap 29 saw McFadden’s car endure a nasty barrel roll that brought out a red flag.

Brett Haas had about as eventful a 16th-place finish as possible Tuesday night at Thunder Mountain, bringing out the caution twice in the feature after having to battle from the rear to qualify in his consolation race when he was penalized for spinning out Landon Cummings.

Anyone that’s been reading this column in 2021 knows full well that I think the concept of four-wide salutes is overused and abused, but Wednesday night’s program at 300 Raceway took it to a whole other level. Look, if you are running a feature with an eight-car field, do NOT take them four-wide. If anything, make the cars run the parade laps single-file, it’d be better sponsor exposure and might trick fans into thinking the car count isn’t quite so anemic.

Another point that has been made repeatedly in this column, but if this video doesn’t drive the point home I don’t know what will. When a race is green, stay… off… the… catchfence.

That’s how you deliver a pizza!!!Scary ride for a driver last night at Nodak Speedway. The driver was OK.Video Credit: DARN TVCommentary: Larry McFall

As discussed above, the late model feature at Farley on Wednesday night had a damn fine finish to it. What was a damn shame, however, was that the IMCA points system that the track utilizes for its championships. Under IMCA rules, winning a feature race is worth one more point than finishing second. As a result, even though Justin Kay bested points leader Matt Ryan to win the season finale race, that wasn’t enough to make up a three-point deficit in the standings. Hardly an incentive to win, though credit to both drivers for racing like points were of no concern.

I doubt this was intentional, as DirtVision has used it multiple times over the course of the 2021 season, but playing Led Zeppelin’s “When the Levee Breaks” during the pre-race at Black Hills on Sunday as Hurricane Ida was making its way ashore was an unfortunate choice.

All the credit in the world to 300 Raceway for having full-size checks to present to its feature winners, even the $400-to-win stock car division. First of all, those checks make for great victory lane photos, but perhaps more importantly they give valuable insight into track payout. Even in 2021, with pretty much every dirt track in America having at minimum a Facebook page, it’s damn near impossible to find payouts consistently. Of course, maybe there’s a reason for that?

Those that have gotten used to having dirt racing to watch on Monday nights got a welcome piece of news this week that the Texas Monday Series will be back for 2022. Any chance we could get some form of late models on the docket for next season?

Where it Rated (on a scale of one to six cans with one a stinker and a six-pack an instant classic): We’ll give the midweek three Lone Stars to commemorate the return of Texas Dirt Track for 2022. It was a truly underwhelming set of races up until the last-lap fireworks in Iowa Wednesday night.

Up Next: Labor Day weekend is featuring some of the biggest money races of the center-drive modified season, but this writer’s eyes will stay tuned to the super late model ranks, with the World of Outlaws Late Models running for $40,000-to-win at Cherokee Speedway Thursday night, then the Hillbilly 100 going off at Tyler County Saturday night. Coverage can be found on DirtVision and MAVTV Plus respectively.