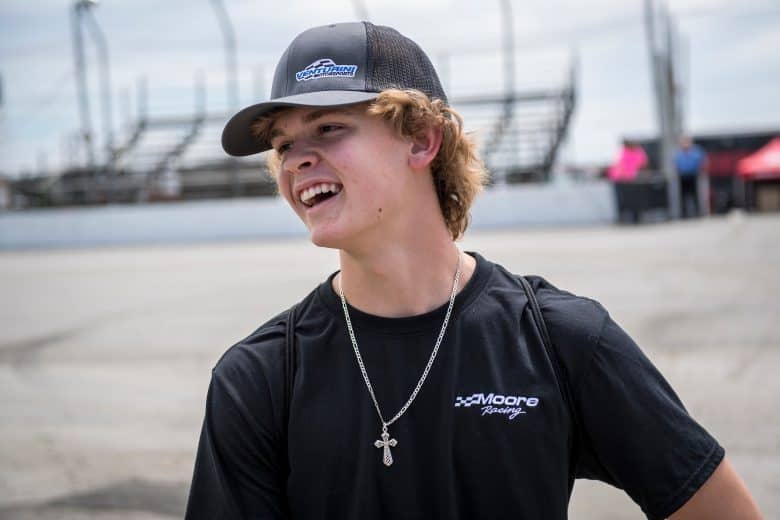 Before he earned his driver’s license, Jesse Love became the champion of a NASCAR-owned series.

This year, Love again is competing full-time in the West Series as well as running a larger part-time main ARCA slate with Venturini Motorsports. He earned his career-best finish of second place at Elko Speedway earlier this year and sits 10th in the ARCA standings with four races remaining.

Prior to ARCA’s return to the Milwaukee Mile on Sunday, Aug. 29, Love spoke with Mark Kristl of Frontstretch to discuss his career development, his friendship with full-time driver Corey Heim and racing against series regulars.

Mark Kristl, Frontstretch: You can’t compete full-time in ARCA yet. Does that affect your development?

Jesse Love: Not really. What I’m doing right now has given me a pretty good head start. Being 16 [years old], my first year doing some bigger track stuff, I’ve been learning a lot throughout the year. From each weekend, learning what I can do better for next time and developing myself in that way has been pretty good. I think right now I need to keep doing that and iron out some minor details.

Kristl: How does your part-time status affect your rhythm with Venturini Motorsports?

Love: Corey [Heim] is able to work with his group a little bit more and be a little bit better prepared in some areas when he gets to the racetrack. At the same time, he’s three or four years older than me. That doesn’t worry me; I know that when I’ll be 19 or 20 [years old], I’ll be as, if not more, prepared than he is.

Kristl: How has that relationship with Corey Heim been for you?

Love: It’s been great. Corey and I have been good friends — he’s the only driver I’m really a friend with — and I have a lot of respect for him.

Whenever I go to a place for the first time, I’m able to ask him questions about it, and he always points me in the right direction. Corey has been a great friend to me, I help him out whenever possible, and vice versa.

Kristl: How do you race against the regulars? Are you more conscientious of their status?

Love: I think it’s always that way with teammates. Obviously, we race each other with a little bit more respect. We have to work together. It’s hard to build a team up as a whole if we wreck a racecar every week. As for the regulars, it’s their job to deal with those who aren’t racing full time, and they have to be aware of that themselves. I really haven’t had any problems with anyone this year. I feel like I’ve raced everyone clean this year and vice versa.

Kristl: You’re eligible to compete for the ARCA Menards Series Sioux Chief Showdown championship. Does the Showdown title really matter to you as a driver?

Love: I think it is if you’re running for it. Obviously, I’m not running all those races. For the drivers who are racing for the Showdown championship, it means something to them.

(While Love has only competed in five of the eight Showdown races, he is seventh in the championship standings.)

ARCA cars drive differently, so you have to know you’re driving an ARCA car and not use your super late model notebook. It’s the driver’s job to differentiate and make sure you don’t mess up. If we’re going to a track where I’ve raced in a super late model, then it has helped me out.

Kristl: Toyota Racing Development has a loaded pipeline. One of its prospects, Harrison Burton, will depart to Ford to compete with Wood Brothers Racing next year in the NASCAR Cup Series. With such talent in the TRD system, does that place more pressure on you to perform?

Love: No, not really. I’ve been with Toyota for a long time, pretty much my whole career. I know their plan for me. Everything I’ve been doing is what they want me to do, so I just need to keep doing that and make them happy. They’ve been doing a great job with my development. We’re both really happy with where we’re at, I just need to keep doing the same [things] and everything else will take care of itself.

He’s learning that he can’t compete against the car that Ty Gibbs drives each week. I wonder why that is. There is something very suspicious going on with Gibbs’ cars. I hope ARCA inspectors finally wise up to what is going on. It isn’t fair to the other drivers who are driving cars that are within the rules.