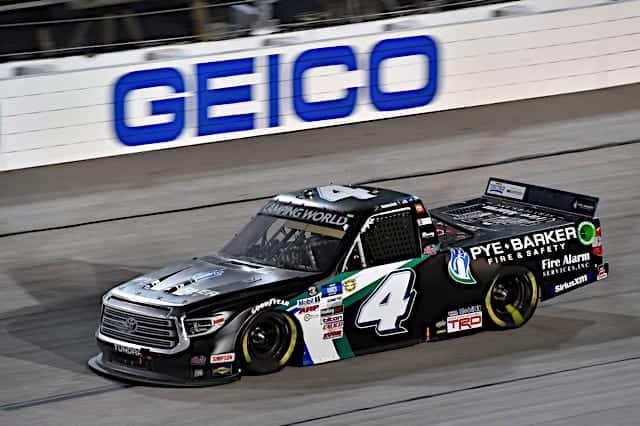 As the NASCAR Cup Series kicks off its playoffs this weekend at Darlington Raceway, the Camping World Truck Series will run the second race in its Round of 10.

Originally scheduled to be at Canadian Tire Motorsports Park, this event was shifted to Darlington after the ongoing COVID-19 pandemic created enough questions about scheduling logistics that led to NASCAR’s decision earlier this season. It’s the first time in series history that Truck Series drivers will contest two races at the historic 1.366-mile oval in the same season.

Two weeks ago, Sheldon Creed was the first to punch his ticket to the Round of 8 with a dominant victory in an … eventful … trip to World Wide Technology Raceway at Gateway. But he outlasted a power outage and a late-race wreck that collected 10 trucks for his second victory of 2021. This weekend, the series heads to Darlington for the third time in two years, so that means most of the field has one, if not two, starts at the track, giving them a bit of experience to look back on and build off of.

You can’t get a whole lot better than an average finish of 1.5 in two starts, and that’s exactly what Ben Rhodes has at Darlington. Last season, he snapped a 48-race winless streak when he took advantage of an overtime finish combined with dominant drivers Brett Moffitt and Creed making pit stops under a late-race caution. Rhodes then followed that up with a runner-up finish earlier this season at Darlington, so he’s definitely one to watch, especially since he’s proven he’s not afraid to rough up the competition a little if he needs to get aggressive on the track.

Having been put in the unenviable position of having to share the No. 98 ThorSport Racing Toyota with Christian Eckes due to sponsorship problems, Grant Enfinger has really shone this season. But because he missed the race at the Daytona International Speedway road course, he was ineligible for the playoffs, despite being inside the top 10 in points, even without a victory (more on that another day). When he hasn’t been behind the wheel of the No. 98, he’s managed to piece together his season by also running the No. 9 for Rohrbaugh Racing. And while this low-budget team isn’t one you’d expect to see at the front of the field, Enfinger has put the No. 9 inside the top 10 twice.

Back behind the wheel of the No. 98 for ThorSport this weekend, the fifth-year driver has finishes of fourth and fifth in his two previous starts at Darlington. And with six top 10s in eight starts with ThorSport this season, it’s easy to see Enfinger as a contender.

The playoffs didn’t start at all the way John Hunter Nemechek had hoped after the strong regular season he had. Posting five wins and just three finishes outside the top 10 in the first 15 races (39th – Bristol Motor Speedway dirt; 12th – Circuit of the Americas; 11th – Knoxville Raceway), the driver of the No. 4 Toyota entered the playoffs as the top-seeded driver with a whopping 49 playoff points to his name.

Returning to World Wide Technology Raceway at Gateway where he won in 2017, the regular-season champion looked to start off his championship battle with a potential victory that would pad his playoff points and put him at an even bigger advantage as the season winds down. Instead, he was caught up in the 10-truck pileup late in the race that left him a disappointing 22nd. Obviously, it could have been worse, though it’s not the kind of momentum any team racing for a championship wants to take into the off weekend, regardless of the point cushion it holds.

The good news for Nemechek, though, is that earlier this season, he started on the pole at Darlington and led a race-high 65 laps before settling for an eighth-place finish. And that was after he was involved in a lap 119 caution that collected 17 of the 33 trucks that were still running at the time. While a trip to victory lane is never a guarantee, if Nemechek can avoid trouble throughout the race, he can easily be around to fight for the win by the time the checkered flag comes around.

As we documented in this column last week, Dylan Lupton will have what’s arguably the best equipment of his career this weekend when he steps into the No. 51 Kyle Busch Motorsports Toyota. And while there are no grand delusions of an immediate trip to victory lane, this week’s trip to Darlington will be a good indicator of the talent Lupton brings with him to the sport. After all, KBM equipment, especially the No. 51 team, has shown it’s more than capable of winning races and championships.

The key here, though, will be for the young driver to take advantage of mentoring from those that surround him at the organization as he has just 11 Truck Series starts and just a single Xfinity Series run at Darlington where he started 23rd and finished 30th.

Even though he’s already got a victory that has him locked into the next round of the playoffs, I’d be crazy not to include Creed as one to watch. After all, he did win at Darlington earlier this season and should have won last September when the series returned to the Lady in Black for the first time since 2011. He and teammate Moffitt dominated, combining to lead a 144 of 147 laps (Creed – 82; Moffitt – 62), but a late-race caution sent the leaders down pit road while others stayed out. Add in a costly pit road speeding penalty and Creed was left mired deep in the field and finished 18th, hardly indicative of the dominant race he’d run. Expect him to be a factor throughout the race, if not one to beat as the laps wind down on Sunday.