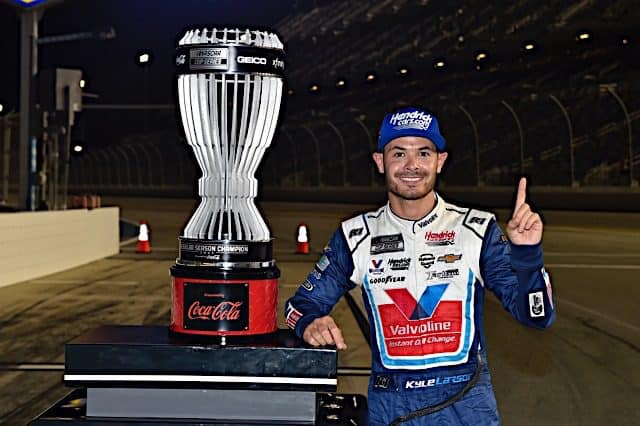 Who will be eliminated in the NASCAR Cup Series playoffs’ Round of 16?

Michael McDowell has been disappointing in the second half of the regular season. He had a strong start to the season in addition to his Daytona 500 win, but he’s 28th in total points in the past 10 races among all Cup drivers.

There was and arguably still is a window to a Round of 8 run if he can make it out of the first round due to the schedule of tracks in the Round of 12, but it isn’t happening.

Aric Almirola has taken a step forward in the second half of the regular season in addition to his surprise win at New Hampshire Motor Speedway, but it might not be enough to get out of this round of the playoffs.

Christopher Bell has had a fairly awful summer, and as the fourth driver at a Joe Gibbs Racing team gunning for a championship, the dirt star has a lot to overcome these next three weeks.

Joey Logano is the best candidate this year for a surprise early elimination. In the past 10 Cup races, Logano ranks 14th out of the 16 playoff drivers when it comes to total points accumulated. Entering the playoffs ice cold is bad enough, but when that’s combined with two tracks (Darlington Raceway and Bristol Motor Speedway) he’s been fairly inconsistent at and without many playoff points to fall back on, Logano is legitimately in danger this round.

See also
Up to Speed: Why This Year’s Cup Series Playoffs Will Be Different for Ryan Blaney

Who will end up walking away after the Round of 12?

Although Kevin Harvick has largely had a disappointing season compared to a fantastic 2020, he should be able to make it past the first round of eliminations. But with the Charlotte Motor Speedway ROVAL ending things off, this round may well come down to how he performs at Las Vegas Motor Speedway.

Martin Truex Jr.‘s strong start to the season really gave way quickly to Hendrick Motorsports starting in late spring. After his last win in Cup at Darlington at Mother’s Day, Truex has only managed four finishes in the single digits in the last four months.

He’ll get a major boost with the final race of the round at Charlotte, but he has struggled so much recently at superspeedway racing that he could find himself with a big hole after Talladega Superspeedway.

William Byron had a very successful spring, with a win at Homestead-Miami Speedway and reaching as high as second in points as late as after the Coca-Cola 600. But Byron has had just four top-10 finishes, coming at four completely different racetracks from what is in the playoffs (Nashville Superspeedway, Pocono Raceway, Watkins Glen International and Michigan International Speedway). An early Hendrick out may well end up being the No. 24 team.

Kurt Busch has enjoyed a lot of success in recent months. However, there has always been a ceiling at Chip Ganassi Racing, and in its final year, finishing short of the third round of the playoffs may well be that.

Who could end up out of the playoffs after the Round of 8?

Brad Keselowski has carried over that same beat-of-his-own-drum strategy he had with crew chief Paul Wolfe to current crew chief Jeremy Bullins. The No. 2 team has had just two top-five finishes since finishing third at Kansas Speedway in early May, but Keselowski has the advantage of so many traditionally strong races for him in the first two rounds of the playoffs.

But it’s hard to envision a championship run unless there’s either a major all-around turnaround or a big brain strategy move in the Round of 8 that gets this team a win.

The last driver in the playoffs, Tyler Reddick is in for a very deep run for a number of factors, but perhaps the biggest is just how much momentum he has. If I’m Richard Childress Racing competition director Andy Petree, I am not moving anywhere from RCR’s mid-summer game plan of going for as many stage points as possible. That’s what got them into the playoffs, and that’s what could elevate the No. 8 as the biggest surprise in them this year.

This has been a breakout year for Alex Bowman, but this is the round where he more than likely bows out of the playoffs. Bowman has had speed, albeit earlier in the season, but more importantly, he’s had a bit of luck on his side at times this year.

At the end of the day, though, the No. 48 just has not been as good as the Nos. 5 and 9 this season at Hendrick, and there’s not much indicating that will change in nine weeks.

It is extremely hard to bet against Kyle Busch in anything. The only multi-time champion in the field, Busch has had a great comeback this season and for much of it has been the only driver to stand much of a chance against Hendrick Motorsports until this final month of the regular season. It speaks to just how loaded this final four is that Busch ends up on the outside looking in on my chart.

Who will leave Phoenix Raceway the 2021 champion?

Ryan Blaney has really started to come into his own this season, being one of the few to outduel the No. 5 car late in a race and is inarguably Ford’s best chance at a championship after his strong end to the regular season. Blaney has the skill to make it this far and compete at Phoenix for a championship, but he’s also the weakest of this final four, which again really shows how great the last three drivers are in this countdown.

Denny Hamlin has had one of the best seasons of his career, even without that elusive win. Average finish-wise, at 9.1 he is on pace for a career best, and he could beat his marks in top-five and top-10 finishes. But Hamlin’s weakness has been just not being able to break through with a race win, and it’s really hard to bet on him against the two remaining Hendrick drivers.

Chase Elliott has actually improved on his numbers from last year, and enters the playoffs with six top-10 finishes in the last seven regular season races. Elliott has gone from being a road course phenom to being a more well-rounded driver just as gifted on road courses, but also being able to compete for wins every single week at every single track. Knowing that, his problem is that he isn’t Kyle Larson.

Last year, Larson left the series just four races into the season. Regardless of that controversy, anybody with eyes could not deny that he was arguably one of the best race car drivers in all of North America last year regardless of what series he ran.

This year, he has returned to NASCAR and has made the most of his opportunity on the track, becoming one of the giants of the sport a year after his career potentially ending. He might be the safe choice, but he’s also the logical choice to finally take the crown of champion.

4 racers, one race, winner take all. There are so many intangibles that it is useless to try to rationally pick a champion.

What does Vegas say?

Good choice. How far down is the new DW?