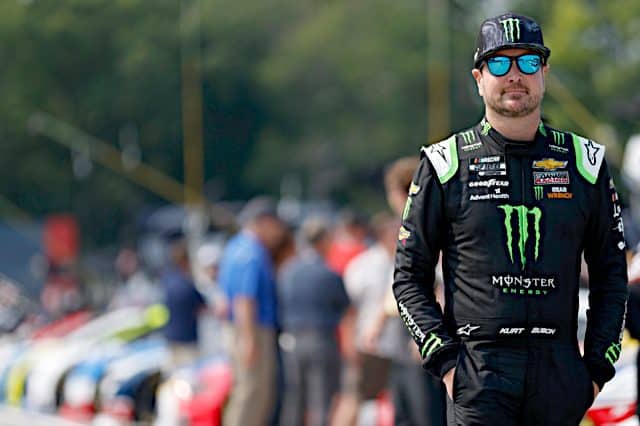 Chris Buescher was disqualified from his second-place finish in the NASCAR Cup Series at Daytona International Speedway for a post-race infraction due to an unapproved track bar mount. Does the punishment fit the crime?

Josh Roller: Not enough information was shared by NASCAR to determine whether or not a disqualification was appropriate or not. What made the track bar mount illegal, and why is that? I can’t tell if the punishment fits the crime until NASCAR or Roush Fenway Racing explains the exact reasoning, and I don’t see that happening.

Luken Glover: Very little information has been released by NASCAR or RFR, other than the fact that the track bar mounting was the reason for the disqualification. To really come to a decision, more detail is needed. The head-scratcher is how this was assessed pre-race. The track bar mount wasn’t changed during the race, leaving dragging to likely being the reason for it. There’s some gray area around it that makes me hesitate to say whether the penalty was deserved or not.

Stephen Stumpf: RFR did not appeal the decision to disqualify Chris Buescher, which makes me believe that the team was in the wrong and that it wouldn’t have had a chance at winning an appeal. However, more information is needed in order to reach a definitive answer on whether or not the disqualification was deserved.

Kevin Harvick starts the Cup playoffs as the lowest-seeded driver. Through how many rounds will the Closer advance?

Glover: While he has undeniably been a step off this season, Kevin Harvick has been consistent enough to advance through the Round of 16. He got a top 10 at Darlington Raceway earlier this season, and he is the defending winner of both the Southern 500 and Bristol Motor Speedway night race. While he is in a much different position than last year, he should get enough points to survive. The Round of 12 is likely where his title hopes come to an end. Talladega Superspeedway and the Charlotte Motor Speedway ROVAL are too unpredictable, and he finished 20th at Las Vegas Motor Speedway earlier this year. The lack of points and unpredictability don’t sit in Harvick’s favor.

Stumpf: This season, Stewart-Haas Racing has shown the most muscle in races with the 750-hp package. The first round consists of Darlington, Richmond Raceway and Bristol, all of which will be using that package. Unless Harvick crashes or runs into mechanical problems, he should have no issue making it to the Round of 12. However, Harvick’s title hopes will most likely end in the Round of 12, as it consists of Las Vegas, Talladega and the Charlotte ROVAL. SHR ran poorly at Vegas at the beginning of the season, and it hasn’t shown much improvement on the intermediate tracks since. Road course racing has been one of Harvick’s biggest weaknesses this season, and Talladega is always one of the most unpredictable races on the schedule. Unless the No. 4 team finds a second gear in the playoffs, Harvick’s hopes of making it to the Round of 8 may very well rest on winning at Talladega.

Roller: Harvick will make it into the Round of 12 based on his top-10 finish consistency. Any driver needs to win or crank out at least two top fives and some stage points to go beyond the Round of 12. Those are two areas in which Harvick has been lacking this season.

Kurt Busch has won at least one Cup race in 18 of the past 20 years but heads to a team next season that has just two top-10 finishes. Will he win a race for 23XI Racing?

Stumpf: This is the debut season for 23XI at the Cup level, and it was bound to run into growing pains as a new organization. As a veteran with more than two decades of experience at the Cup level, Kurt Busch will be an asset to the team next year and will be able to assess its equipment and setups. Busch winning a Cup race in 2022 will ultimately rest on how well the team can adjust to the Next Gen car. In many ways, all of the teams will start with a clean slate in 2022 with the brand new car. Getting a head start on the other teams would drastically increase Busch’s chances of winning next season.

Roller: If Busch wins next season, excluding superspeedways, it will be in the second half of the season. 23XI is still a growing team, and it will take some time for Busch to blend into the culture at the team and Toyota. Then there is the learning and relationship maturation period between him and his crew chief. Additionally, Busch’s veteran knowledge and experience switching to the Car of Tomorrow in 2007 and 2008 and then to the current Gen 6 car in 2013 will be valuable to the 23XI crew. That will give it an advantage over a team like Hendrick Motorsports, whose four drivers haven’t been through a car change in the Cup Series.

Glover: It’s too early to say, as 23XI has struggled in several ways this season. Busch will no doubt elevate the team, and will likely outrun new teammate Bubba Wallace pretty comfortably. Pocono Raceway, Atlanta Motor Speedway and Bristol stand out as tracks at which he could have a shot. It’s tough to say given the team’s performance this year, but his streak is likely in jeopardy.

Who will win the 2021 Cup championship?

Roller: Color me vanilla, but my pick is Kyle Larson. There’s no reason not to pick him.

Glover: It’s too hard to go against Larson right now. Despite only winning once in the last nine races, Larson’s skill is combustible enough to go on another tear, and that will be dangerous in the playoffs. The only round of concern is the Round of 8, but he’s still elevated his performance at those tracks this year (Kansas Speedway, Texas during the All-Star Race and Martinsville Speedway). Phoenix Raceway is a sneakily strong track for him, so as long as he avoids a Harvick-like collapse, watch out. However, I’m not going to sleep on Ryan Blaney either. The winner of the last two races carries the most momentum out of all playoff drivers. Opposite of Larson, the Round of 16 may be his biggest concern. But with a larger cushion than ever before, plus momentum, Blaney should make it through. If so, the next two rounds set up nicely for him. A Larson vs. Blaney battle is just what the sport needs, and it quite possibly could come down to that.

Stumpf: Larson has been having one of the most dominant individual seasons in the 21st century. He should theoretically have no problem making it to the Championship 4, but the biggest test will be at Phoenix, a track that is historically not one of his best. However, he showed promise at the track in March, as he had one of the fastest cars and managed to finish seventh despite speeding on pit road twice. Larson will ultimately win the title, but it will not be a cakewalk for him.

ABC. Anyone But Chase.

Kurt has a way better chance than their other employee masquerading as a driver.

Driver masquerading as a racer.

Earnhardt used to say, “Good driver, bad racer.” There is a difference. I didn’t say “racer.” Too many of the drivers in Cup now don’t want to race.

Assuming Gibbs/Toyota provides some decent support, I think Kurt has a real good shot at sneaking a win, or maybe 2 in. Will he win 10 races and the championship? No.