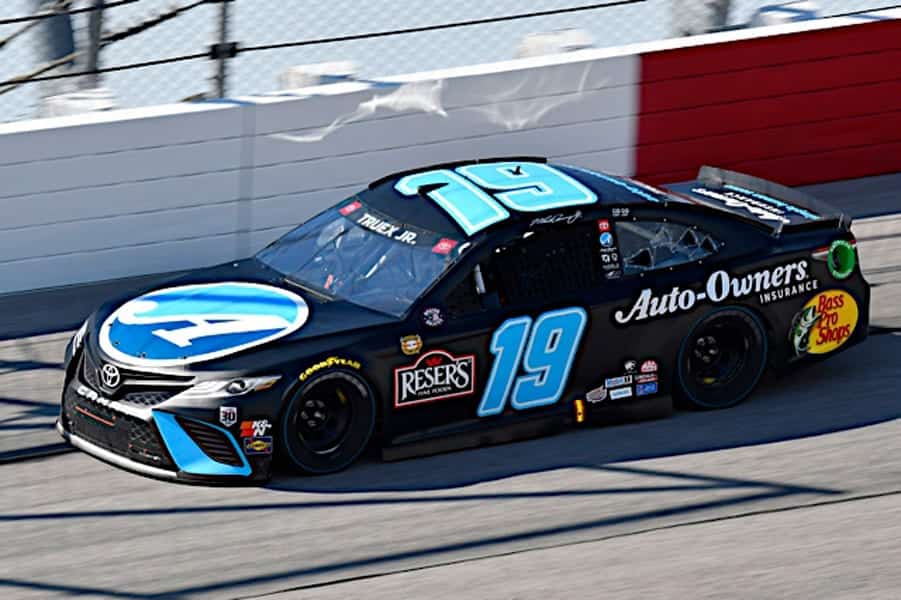 The NASCAR Cup Series begins its 2021 playoff chase with the Round of 16 at Darlington Raceway on Sunday, Sept. 5. Let’s get your daily fantasy NASCAR DraftKings rosters ready for the Cook Out Southern 500.

It’s the second year in a row Darlington kicks off the Cup playoffs and boy, 2020’s race did not disappoint. Martin Truex Jr. and Chase Elliott battled for the lead late until Truex tried to clear the No. 9. Both drivers hit the wall and finished in the 20s, gifting Kevin Harvick the victory from third.

Last year, the cars used the lower horsepower package at Darlington, not the 750-horsepower one that was run in May. In that event (the Goodyear 400) Truex led all but 45 circuits en route to the win. Keep that in mind as drivers who did well in 2020 might not be able to replicate their performance with a different setup.

Remember, in daily fantasy (DFS), you need to roster drivers who can potentially dominate the race, whether that be one or two (or even sometimes three, depending on how many laps each driver leads). You can look at previous races from 2021 that used this higher horsepower package (outside of the road courses) as well as some abrasive tracks like Atlanta Motor Speedway or Homestead-Miami Speedway to see who ran up front and had good speed.

There’s also something new at Darlington this time around: turn 2 has a repaved area, fresh asphalt which could give tires more grip. The rest of the track’s surface is still abrasive, so it will be interesting to see how this patch of pavement affects the race.

Darlington officials were concerned about some areas up near the wall in Turn 2 so repaved a 600-foot section about 32 feet wide. They milled/replaced about four inches deep into the asphalt. https://t.co/k2DIfdBUCQ

Before I share my picks for Darlington, here’s how last week’s drivers did at Daytona International Speedway.

Most of this roster, except William Byron, were running fairly well at one point or another in the race. However, crashes took out Byron, Kaz Grala and Landon Cassill, leaving the total far below the cash line. Justin Haley did earn sixth, though, and scored almost 60 fantasy points on DraftKings.

158.95 was the minimum fantasy score to double your dollar in the large $1 single entry double-up contest. Meanwhile, in the $1 Happy Hour tournament, you needed to total 209.8 DraftKings points to win $1.81.

As I mentioned earlier, Truex wiped out the competition in May, leading 248 of 293 laps in cruising to the checkered flag. No one could even come close to him then. He also led 196 circuits at Darlington last fall before his ill-timed move that sent him and Elliott in the wall. Truex recorded the fastest lap 90 times in that race and 62 times this past spring. Additionally, he won here in 2016 after posting 43 fastest laps.

Across all the 750-horsepower races this season, the No. 19 Joe Gibbs Racing pilot has an average finish of 10th, winning at Phoenix Raceway and Martinsville Speedway earlier this year. But since Truex’s last victory at the Lady in Black, he didn’t finish inside the top 10 at Dover International Speedway, Nashville Superspeedway and New Hampshire Motor Speedway. In fact, his best average position since Darlington was fourth place at Watkins Glen International.

I understand if that gives you pause. In the end, Truex’s strong runs earlier this year and last fall indicate that he should once again have a fast car on Sunday.

What’s unusual about this season is that the No. 4 Stewart-Haas Racing Ford has not been to victory lane yet. However, Harvick’s year seemed to turn at Loudon in July when he led 66 circuits, a season high. Though Harvick’s teammate Aric Almirola ended up winning that race, it was proof he still had potential to run not only in the top five, but also as the leader.

So far in 2021, Harvick has just one result outside the top 10 at paved ovals less than 1.5 miles, and that was when he ran into the wall due to a blown right-rear tire at Richmond Raceway. Before that incident, he was in the top 10 with 20 laps to go, so we can regard that as just a fluke. Don’t be afraid to play Harvick in DFS this week, as he’ll more than likely garner a top 10 once again.

Harvick may have the best top-10 streak at Darlington, but Hamlin has the third-best average finish among active drivers. He, too, has earned three victories at the Lady in Black, in 2010, 2017 and the midweek race last season. Plus, like Harvick, Hamlin is still winless in 2021. Could his first win come this weekend?

See also
4 Burning Questions: Who'll Be Eliminated in Each Cup Playoff Round?

Well, the No. 11 JGR driver was out front for over 200 laps at both Martinsville and Richmond before ultimately crossing the finish line third and second, respectively. Hamlin also recovered from an early spin at New Hampshire to come home 10th and nearly won at the Indianapolis Motor Speedway Road Course last month before Chase Briscoe turned him. He’s due for a win, but even without a first-place finish this weekend, a top five should suffice if you have the dominator(s) in your lineup.

I chose Chastain mainly because he actually hasn’t been all that bad at these 750-horsepower racetracks. Chastain finished in the teens at Phoenix, Martinsville, Richmond, Darlington and Dover and even led 10 laps at the Lady in Black. Then, in Nashville, he came in second to Kyle Larson after rolling off 19th. Last month in Loudon, the No. 42 Chip Ganassi Racing wheelman gained 12 positions for an eighth-place result.

Chastain is starting 23rd this week and could once again earn a top 15. If he does, it would produce a good DraftKings score for your contests and help fill out the back end of your roster. Hopefully, he’ll stay out of trouble and get a good finish.

Usually, I like to roster Briscoe at road courses, but he has some top 15s at other racetracks as well. He came in 11th at Michigan International Speedway, 15th at Atlanta Motor Speedway in July and 11th at Darlington. Now, some of those finishes may be due to strategy, but it still is good for a Cup rookie learning the ropes.

Briscoe’s starting just behind Chastain on Sunday evening (24th) and has a very low salary this week, allowing you to fit several drivers above $10,000. Sometimes, if you have the dominators in your lineup, all you need is for your value drivers to gain some positions to help you win your DFS contests. I’m thinking that will be the case with Briscoe this week.

Speaking of value drivers, Newman’s salary is extremely low, at least in my opinion. I mean, yes, he’s starting inside the top 20 this week (19th), but his salary hasn’t been in the $5,000 range since Pocono Raceway in June. Darlington is one of Newman’s better racetracks; he has five top-10 finishes in the last 11 races there. One of those results was in May when he gained 10 spots to wind up in 10th.

Additionally, he claimed a seventh at Homestead-Miami Speedway earlier this season (another high-tire wear track) and a 13th at Nashville (750-horsepower course). Plus, Newman has two top-10 finishes in the past three races. Granted, one was at the Indy road course and the other was at Daytona, but it still counts!

If Newman’s able to stay in the top 15, it would be great for DraftKings rosters, especially since he’s so inexpensive. Let’s hope he does.