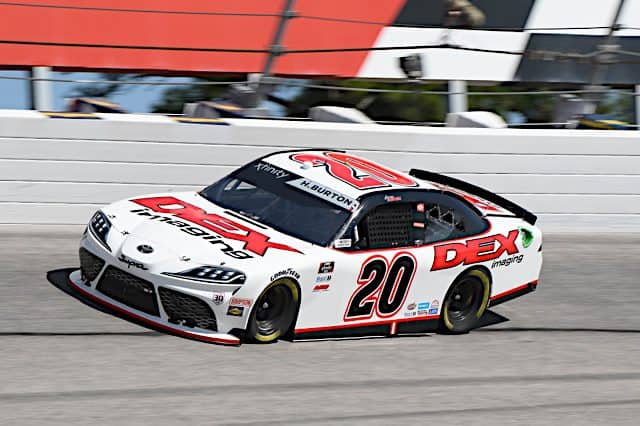 DARLINGTON, S.C. — Harrison Burton got all the way to the driver-side door of Noah Gragson in turn 4, but that was as close as he got to victory lane.

Burton notched his best result of 2021 with a second-place finish in the Sports Clips Help a Hero 200 at Darlington Raceway on Saturday (Sept. 4). Turning in his best run of the year, though, didn’t help ease the disappointment of remaining winless.

“Something about second always sucks worse than anything else, because you feel like you’re one move away or one run away from being in victory lane,” Burton said. “I think he was just better than us in [turns] 1 and 2 and we were really strong through 3 and 4. I just had to take some lines that I didn’t really want to take.

“Just [tried to do] the opposite of what he did and tried to get there and loosen him up, just to do my job getting up there. Just frustrated, but really proud of our team.”

The strong performance came without crew chief Jason Ratcliff atop the pit box, who was out due to COVID-19 protocols and replaced by engineer Dustin Zacharyasz. It’s another in a long line of good performances for the No. 20 Joe Gibbs Racing team, which notched its sixth consecutive top-10 finish and its fourth top five in that stretch.

The key to success, Burton said, has been the success of his teammates. The No. 54 car, wheeled by multiple drivers this year, has claimed nine Xfinity Series wins while the three championship-eligible cars have gone winless.

“We’re a team with a bunch of winners, and everyone on this team has either won together or won some other place and at different levels,” Burton said. “A lot of guys have Cup experience, so I feel like we just have that experience. When it comes time for the playoffs, we’re going to be really dangerous and run more like we have recently.”

In fact, a postseason mindset is exactly what Burton has utilized over the last few weeks, another advantage with the postseason just a couple of weeks away.

“The situation we’ve put ourselves in without winning throughout the season has made it to where it’s gonna be a long road and I have to be perfect,” Burton said. “And so matching that intensity now is a big deal, and we’ll try and continue that.”

Burton is a proven winner in the Xfinity Series and claimed four wins in 2020. That, combined with his continued success in 2021, led to Team Penske hiring the 20-year-old to drive the Wood Brothers Racing No. 21 car in the Cup Series beginning in 2022.

But sitting without a win has weighed on Burton. Coming home second at Darlington just brought that further into focus.

“Bittersweet, right?” he said. “It’s hard to win. And whenever you have a chance, it’s like, ‘I got to take advantage of this.’ And I think the class of the field, the 54 [of Denny Hamlin], had some problems — I don’t even know what happened. And that kind of opened the door for me and Noah. I just didn’t walk through it.“

Burton’s next opportunity will come on Saturday, Sept. 11, when the NASCAR Xfinity Series hits Richmond Raceway at 2:30 p.m. ET.