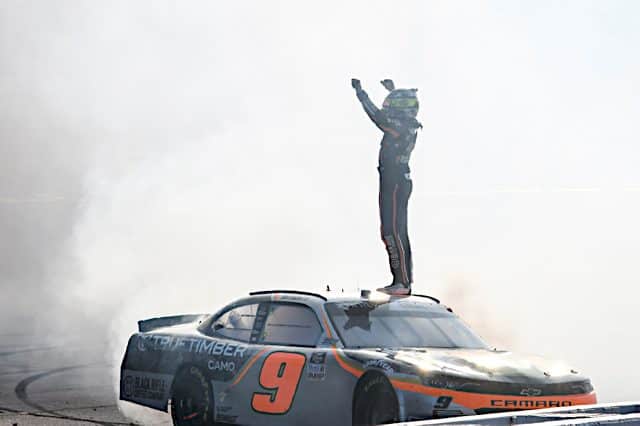 Noah Gragson held on to win the NASCAR Xfinity Series Sport Clips Haircuts VFW Help a Hero 200 at Darlington Raceway on Saturday (Sept. 4) afternoon. Denny Hamlin dominated for most of the afternoon and looked to have things well in hand, at least until he was sent to the rear on a late restart for a piece of equipment clearing the wall too early on the last group of pit stops.

Gragson had to fend off a late charge from Harrison Burton, who was also winless in 2021 entering Darlington, to get his first win of the season at the newly paved track that’s “Too Tough To Tame.”

“It has been way too long [since we won],” Gragson said in his post-race interview. “I hate that the [No.] 54 had his issue, it was pretty fun racing him.

“A lot of frustration this year and we are getting some momentum when we need to,” he added, having minutes before locked himself into the playoffs. “I knew I had to win today […] so, so proud of this team. I knew we were capable of it.”

Three races remained before the playoffs prior to Saturday’s event, with drivers like Michael Annett and Clements still looking for a way in on points. Just an hour before the race, Ty Dillon was announced as a replacement for Brett Moffitt, out due to medical issues, and started the race at the rear in Our Motorsports’ No. 02. The absence for Moffitt didn’t mean much for his playoff implications, though: He sat 22nd in points at the time, in need of a win to make the playoffs.

AJ Allmendinger and Daniel Hemric led the field into turn 1 to kick off the 200-mile race, with the newly repaved turn 2 presenting a huge unknown for the entire field. On lap 2, the “Lady in Black” claimed her first victim as Sam Mayer slapped the wall, though the No. 8 was able to recover.

Outside of a Carson Ware spin and water temperature concerns for Hemric, the main action came on the final lap of stage 1 with Hamlin out front.

Hamlin dove under Ware as he attempted to close out a stage victory, but the No. 54 with the “Flying 11” throwback scheme got loose under the No. 74 and slid sideways on the turn 4 exit, allowing Hemric to scoot by.

Allmendinger and Kaulig Racing teammate Justin Haley swapped the lead to open the second stage, but another yellow flew when Brandon Jones slid sideways after contact from his Joe Gibbs Racing stablemate Hemric and bounced off the inside wall. Gragson took the stage win while a five-way battle for second raged amongst the entire top five, featuring everything from difficult three-wide racing to Allgaier using a huge run to pick up several spots on the backstretch.

Hamlin, meanwhile, took advantage of the battle between Allmendinger and Austin Cindric to take second with a three-wide pass as Allmendinger tried to hold off the entire group.

Gragson led the field to green to begin stage 3. Allmendinger took the top spot but was quickly succeeded by Hamlin, who took the lead away from the No. 16. With around 40 laps to go, the yellow flew when Tommy Joe Martins had an issue, slowed on track and ended up directly in Riley Herbst‘s path.

The No. 98 plowed into the back of the No. 44, and Herbst limped the car around to pit road, where it caught fire.

Riley Herbst had nowhere to go.

Watch the on-board from the No. 98 car as he gets into Tommy Joe Martins. #NASCAR #XfinitySeries pic.twitter.com/7b6a6QRhgE

The leaders made pit stops under yellow, with Hamlin retaining the lead. Timmy Hill stayed out and led the field to green, but the No. 66 didn’t even make it to the first turn before his car stalled due to being stuck in second gear.

Timmy Hill stayed out for the restart with 32 laps to go, and chaos ensued. #NASCAR pic.twitter.com/KUArLpPEYj

With nine laps remaining, Gragson attempted to run down Hamlin, but Jones spun again to bring out another yellow. Hamlin won the race off pit road against Gragson, but had to drop to the rear due to equipment being over the wall too early. Hemric and Landon Cassill stayed out with Gragson in third, restarting with five laps to go. The field made quick work of the two, and NASCAR held the caution even when Hemric slid down to the apron before refiring his Toyota.

Allmendinger had a tire go down in a separate incident, while chunks of debris on the backstretch brought out another caution. Gragson held onto the lead after a challenge from Harrison Burton to win his first win of the season. He is locked into the playoffs on points; however, the win will give him some playoff points before they begin in three weeks.

As for Hamlin, he rebounded to finish just outside the top 10 in the 12th position.

The Xfinity Series heads to Richmond Raceway for the penultimate race of the 2021 regular season. The Go Bowling 250 is set for Saturday, Sept. 11 at 2:30 p.m. ET.

Everyone wins in the 54 car, except poor Denny. I feel bad for him.

Nascar has Reddick coming in 7th, not Austin Dillon who Nascar lists in 29th.