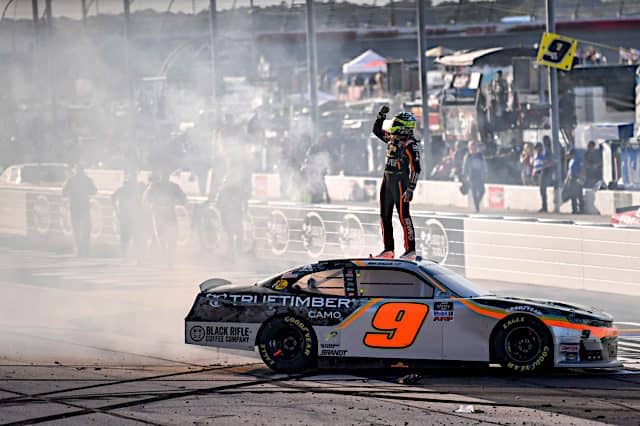 The 49-race winless streak for Noah Gragson was snapped in Saturday’s Sports Clips Haircuts VFW Help A Hero 200 at Darlington Raceway. Gragson was chasing Denny Hamlin for the lead before a caution with nine laps to go. The Xfinity Series field pitted, but Hamlin was penalized and sent to the rear of the field because his crew had equipment over the wall too soon.

Daniel Hemric and Landon Cassill occupied the front row when the race restarted with five laps to go. Both elected not to pit during the caution, leaving Gragson to line up on the outside. Hemric led Gragson into turn 1 on the outside, but the old tires under Hemric’s Toyota were no match for the fresh ones under Gragson’s Chevrolet. The No. 9 was the leader by the time they hit the backstretch.

Gragson then held off Harrison Burton in an overtime restart, which featured the mixed strategy of some frontrunners pitting and others staying out. Burton finished second, Austin Cindric third, Justin Haley fourth, and Jeb Burton finished fifth. Justin Allgaier came home sixth, followed by Tyler Reddick in seventh, Jeremy Clements in eighth, Myatt Snider in ninth, and Alex Labbe rounded out the top 10.

The 2021 NASCAR season has been full of surprises across its three national divisions. Labbe is known for his road course racing abilities, and of his nine career top 10s, four have come at road courses and three at superspeedways. Where have the other two come from? This year, at both Darlington races. You read that right. Both of Labbe’s top-10 finishes in 2021 have come at Darlington Raceway, and coincidentally both are 10th-place finishes.

Labbe benefitted from a field stack-up on the second-to-last restart, and when Hemric and A.J. Allmendinger pitted during the final cycle Labbe was elevated into the top 10. He retained that position during the overtime restart. Most of his race was spent floating just inside or outside the top 20. When craziness breaks out late in the race, it’s good to see smaller teams seize the opportunity to better their finish.

Riley Herbst had been putting together solid performances and earning points to dig his way into playoff contention for five races. At Darlington, however, bad luck struck Herbst hard and quite literally came out of nowhere. On lap 109, Herbst was behind Brandon Brown when Brown moved to the right as the pair traveled down the backstretch. Suddenly, the rear end of a slow car appeared in front of Herbst and the No. 98 Stewart-Haas Racing Ford plowed into the rear of Tommy Joe Martins‘ Chevrolet.

Herbst was mired back in traffic. During the caution for the end of stage two, he was instructed to come back down pit road to ensure all the lug nuts were tight on his car. He’d been running in and around the top 10 and finished 11th in stage two before that.

The front end of Herbst’s Ford was destroyed, and his day was officially done when his engine caught fire beside the entrance to the garage area. He was credited with a 38th-place finish, adding just one point to his season total. Herbst lost 22 points to the cutline and is now only 46 points ahead of Michael Annett.

Brandon Jones’ two-month nightmare continued at Darlington. The 600-foot long patch of new asphalt laid in turn 2 was not a significant obstacle for drivers in Saturday’s NASCAR Xfinity Series race, but it did call for extra attention as they traveled across the transitions, mainly the new asphalt to old asphalt transition.

Hemric was chasing teammate Jones on lap 59 and had his nose next to the left-rear of the No. 19 as the duo prepared to enter the backstretch. Jones’s Toyota bobbled ever so slightly, but Hemric moved up into the left rear of Jones as his Toyota traveled across the transition. The resulting contact sent Jones spinning toward the inside wall, inflicting heavy damage on the left front of Jones’ car and leaving him limping around the track for the remainder of the race.

Dating back to Atlanta in July, Jones has finished outside the top 30 five times in the span of seven races. His other two finishes were sixth and second, and he accumulated just 89 points in those seven races. Considering that a driver can score a max of 60 points per race, 89 is not that many points for a driver in a Joe Gibbs Racing Toyota. Like Herbst, Jones lost precious points to the cutline. Jones was 81 points ahead of Annett and is now only 65 points to the good.

Anytime a slower car stays out on older tires, especially on a tight racing surface like Darlington, people will be left scratching their heads. On a restart with 32 laps to go, Timmy Hill and his team elected to stay out and keep the track position gained during the caution involving Herbst. Hill was first and not only remained the leader but chose the top lane. When the time arrived for lane selection for the choose cone rule, the following few drivers picked the inside line, but Hemric was the first to follow Hill on the outside lane.

Hill’s restart was okay but he slowed rapidly as the field crossed the finish line. This backed up Hemric, knocking him outside the top 10. Hill reported back to his crew that the car popped out of gear, and he limped back around. Hemric later had another shot at the win, but was riding on on old tires. The decision to remain the leader was never going to work out for Hill: The field was going to freight-train him within two laps.

This move cost Hemric a chance at a better finish should the race have remained green to the end which it didn’t. The set of tires on Hemric’s car was his last fresh set. Had he used up too much of his tires to use in the later restarts? Did the tire wear sustained in his charge back into the top 10 contribute to his spin later in the race? Hill had every right to restart there, but the argument can be made that making it at Darlington was not the wisest of decisions, given the track’s wear on tires and narrow racing groove.

Clements scored his first top-10 finish since Atlanta on July 10 with an eighth-place result. He spent most of the race between 12th and 14th but, on the final restart, found himself restarting inside the top 10. Clements held on to the newly found track position and turned a decent points day into an excellent points day. With Annett unable to regain his lost track position from the second to last restart, Clements outpointed him by six tally marks, extending his margin over Annett by that amount. Clements moves to 10th in the standings, 78 points above the cutline.

B.J. McLeod was one of four drivers pulling double duty this weekend at Darlington. In his third Xfinity Series start of the season, McLeod finished 22nd in DGM Racing’s No. 90 entry, which is one of the car’s better finishes of the season. Austin Dillon was behind the wheel of Jordan Anderson Racing’s no. 31 Chevrolet. Dillon started 35th and quickly fought his way to the top 15. About 10 laps into the third and final stage, Dillon was inside the top 10 but made an unscheduled pit stop. Unable to recover, Dillon finished one lap down in 29th.

Tyler Reddick drove the No. 23 for Our Motorsports to another stellar finish. His seventh-place finish Saturday at Darlington is officially his best performance with Our Motorsports this season. He finished second at Homestead in February but was disqualified and officially finished 40th.

Denny Hamlin made his lone Xfinity Series start of the season. Arguably, he was the one to beat, but he was sent to the rear of the field for a penalty during the final pit stop. His crew had equipment over the wall too soon during the second to last caution. Hamlin was only able to salvage a 12th-place finish after leading a race-high 43 laps.

“First thing I want to say is thank you to all you badass race fans for coming out.” – Noah Gragson

In turn 2, Darlington Raceway was forced to repave a 600-foot long portion of the track, citing track deterioration. The new pavement posed a new challenge for an already daunting track, including a tricky turn 2 exit. The transition from old to new asphalt and the new to old asphalt were challenging for the NASCAR Xfinity Series cars. The latter gave drivers more of an issue, that being where they wanted to accelerate. The only incident with the new pavement was the Jones-Hemric wreck, though. Other than that, the new pavement presented no further obstacles for drivers at Darlington than it did this past May.

With two races to go in the regular season, the two significant points battles have heated up. Allmendinger finished 20th, but that wasn’t indicative of his day. He spent most of his day in the top five, but damage sustained during the one of the last restarts forced him to pit for repairs. Cindric was a top 10 contender all day and finished third. Allmendinger’s 17-point lead over Cindric for the regular-season championship and 15 bonus playoff points is now down to just one.

On the other end of the playoffs, the gap from 10th to 13th shrank by only three points, but Clements now holds onto 10th place over Jones. In the final two races of the season, Jones and his team need to finish strong. If Annett couples good finishes with a fair amount of stage point accumulation, he will knock on Jones’ door for a playoff spot if Jones can’t find a way to finish inside the top 20. Herbst has made gains over the previous month and can’t let bad luck striking him at Darlington ruin what has been a great late summer run.

Two races remain until the start of the NASCAR Xfinity Series playoffs. The series will first visit Richmond Raceway on Saturday, Sept. 11. The green flag for the Go Bowling 250 is at 2:30 p.m. ET, and Dale Earnhardt Jr. will make his sole start of the 2021 season in the No. 8 Chevrolet. After Richmond, it’s Bristol Motor Speedway’s turn on Friday, Sept. 17. The Food City 300 starts at 7:30 p.m. ET and will be the final opportunity for drivers to pad their points or win their way into the field of 12 playoff drivers.

Good to see Clements get a solid finish.