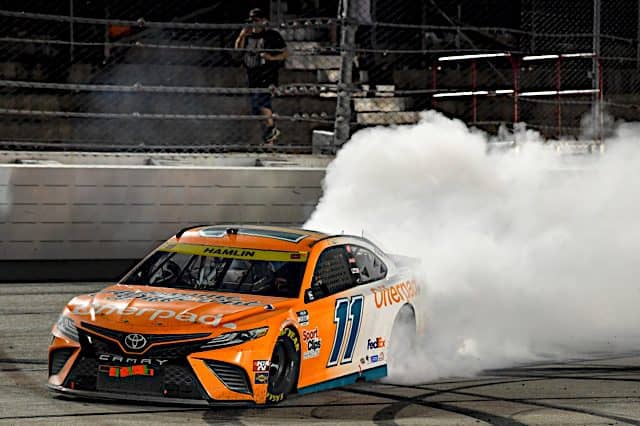 More than four hours after the green flag dropped on the Southern 500 at Darlington Raceway, Denny Hamlin emerged the winner amid from what was essentially a war of attrition between the 16 playoff drivers. Hamlin also survived a last-corner charge from Kyle Larson, who in his words tried to “video game it” in a last-ditch effort to win the race.

Problems abounded for nearly all of the playoff drivers, including three of the four Hendrick Motorsports cars and all four Joe Gibbs Racing entries. Hamlin suffered some damage to his right-rear tire and nursed it for the remainder of stage 2 after winning the opening segment, but avoided the more catastrophic events that plagued his teammates.

RETWEET to congratulate @DennyHamlin on his #Southern500 win at @TooToughToTame!

What a final corner battle with Kyle Larson! #NASCARPlayoffs pic.twitter.com/JsHuhMAcQm

“Wow. It’s just great […],” he added. “He [Larson] drove it in past the limit of the cars and tire. I knew he was coming, I was a little bit conservative that last lap because I knew I had about a four-car-length lead. I didn’t think he was gonna go that deep, but [a] great race. It’s been back and forth with me and him most of the year, he’s just been a little bit faster on these types of racetracks and luckily these cautions came when they did. The strategy worked out great for the team, but man, I’m really happy tonight.”

Alex Bowman and William Byron were the first playoff drivers to suffer misfortune. Bowman got into the fence on lap 16 and was tagged by the No. 24. Byron was trying to avoid his teammate, but had little room or time to maneuver out of harm’s way.

After a competition caution, Michael McDowell became the first postseason competitor to retire from the race. On lap 31, McDowell got out of shape in turn 2 and smacked the outside wall on exit, sliding into the inside wall and incurring heavy damage to the No. 34.

It was McDowell’s first career playoff race, and he left South Carolina dead-last with a 37th-place finish.

A caution for two Rick Ware Racing cars slowed the field yet again, while Bowman’s bad night continued with a small left-rear fire on pit road. Ahead of all this, Hamlin cruised to the stage 1 victory.

His Joe Gibbs Racing teammate in Kyle Busch ended up in the wall, though, after the No. 18 got loose in turn 2.

Kyle Busch is OUT!

Austin Dillon gets into the No. 18 car, and "Rowdy" goes to the garage for an early exit at @TooToughToTame. #NASCARPlayoffs pic.twitter.com/j3hvPmPpfn

Busch’s significant impact mangled his car beyond repair, and he aggressively drove it into the garage and straight to his hauler — knocking over cones and sending several crew members scrambling out of his Toyota’s path.

“We were running like shit and we got wrecked,” Busch said after the crash, “so that’s what you get when you run like shit. Shouldn’t be there.”

A debris caution meant more problems for playoff drivers, as the chunk of metal bounced off the nose of Christopher Bell‘s car one lap and he ran over it moments later. Bell pitted to repair the damage.

It seemed that every JGR entry was having issues at that point outside of Hamlin: Truex had a loose wheel and had to pit, going one lap down. He later had a speeding penalty after exiting the pits in first place.

A little later, Byron mirrored his HMS stablemate Bowman in having multiple issues at Darlington, as he lost a tire and slammed the turn 1 wall.

Generally calm after the storm of cautions, the second stage went to Larson.

The lead changed hands several times as Hamlin and several other drivers opted for a different strategy, only to have all that thrown out the window when a Ryan Blaney spin brought out another caution.

Three-wide once the race went green didn’t work for Bell, Chase Elliott and Bubba Wallace when all three squeezed together and the No. 9 got the brunt of it, scraping the wall, cutting a tire and hitting the wall again. Elliott brought his Chevrolet to pit road and the crew attempted to fix it, but the driver took it to the garage.

Hamlin scooted away on the restart despite a challenge from Larson, about half a second ahead of the No. 5 with 25 laps remaining. The top two, along with Chastain, all raced within a second of each other with less than 20 to go, while Larson inched closer and closer to Hamlin in lapped traffic.

Larson soon came under fire from Chastain, causing both to fall back, but the No. 5 again closed in on Hamlin as the laps dipped beneath 10 remaining. The incremental gains for Larson culminated in his last-ditch, last-corner effort to get by the No. 11.

Hamlin blocked Larson and kept the No. 5 at bay, crossing the finish line with but one tire donut on his right side. Larson’s car, meanwhile, ground its way under the checkered in a shower of sparks, followed by Chastain in third.

According to a Whoop heart rate tracker on the broadcast, Hamlin’s heartbeats per minute stayed steady at 119 despite the daring move at the last moment by Larson.

“He was gonna have to go through me,” Hamlin said afterward of Larson’s move. “I knew that was about the only thing [he could do], but it was a great attempt. Those guys had the fastest car for most of the day. The [No.] 42 was super strong too. Really just happy for our team.”

The Cup Series heads north to Richmond Raceway next week for the Federated Auto Parts 400 Salute to First Responders on Saturday, Sept. 11, with coverage set for 7:30 p.m. on NBC Sports Network