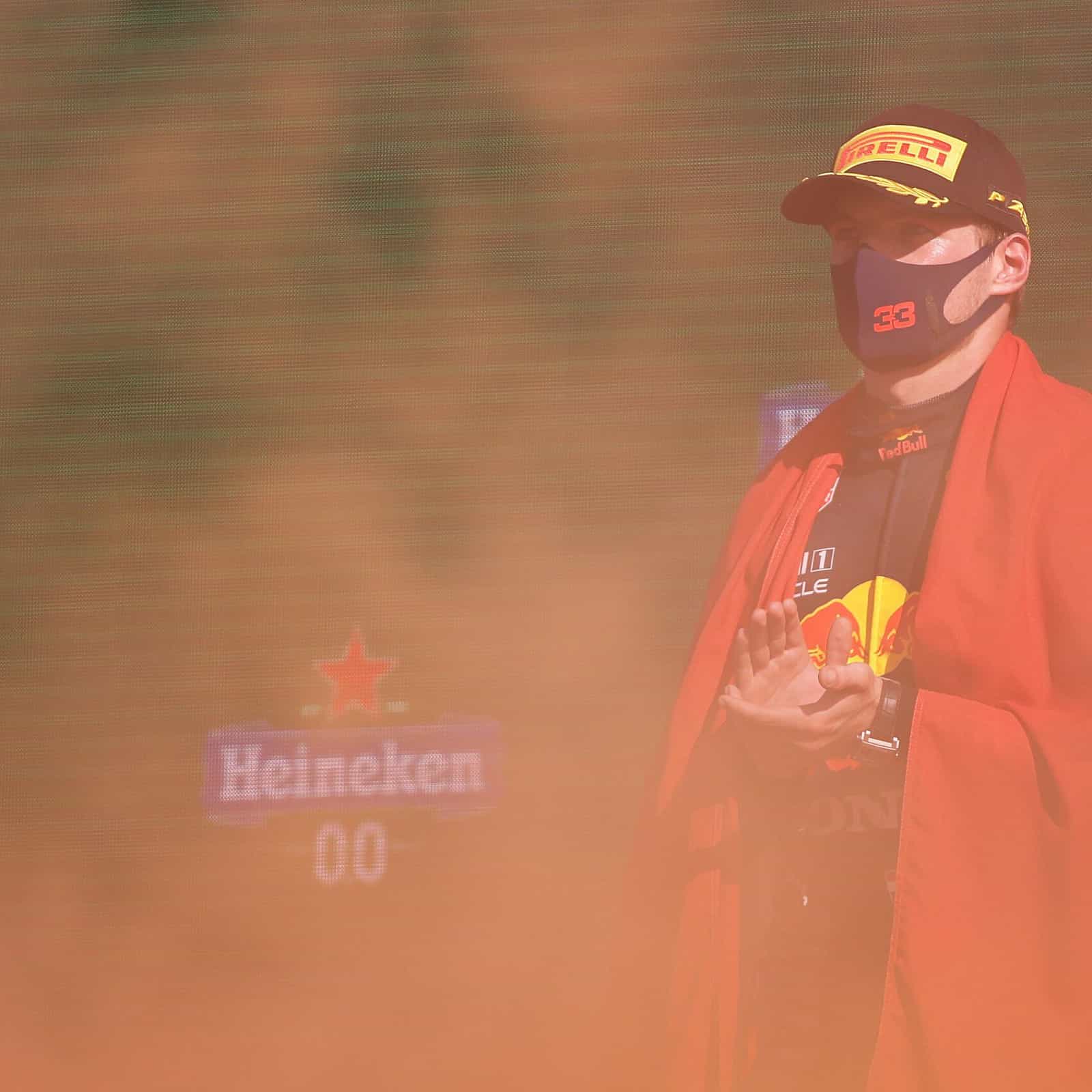 ZANDVOORT, NETHERLANDS - SEPTEMBER 05: Race winner Max Verstappen of Netherlands and Red Bull Racing celebrates on the podium during the F1 Grand Prix of The Netherlands at Circuit Zandvoort on September 05, 2021 in Zandvoort, Netherlands. (Photo by Lars Baron/Getty Images) // SI202109051288 // Usage for editorial use only //

By the end of the first lap, Max Verstappen had cleared Lewis Hamilton by almost two seconds and from then on, he faced no challenge in claiming the win at the Dutch Grand Prix. Formula 1 returned to Zandvoort, Netherlands for the first time since 1985 on Sunday (Sept. 5) and the scene surrounding Verstappen’s victory in his home country appeared to be that of a festival.

With a couple of laps to go in his effort, Verstappen paced the circuit with orange flares being set alight and the frontstretch engulfed in hazy orange smoke. The win pushed him atop the driver’s standings once again and he now holds a three-point lead (224.5 – 221.5) over Hamilton.

Valtteri Bottas played the role of good teammate to Hamilton and brought his Mercedes across the finish line in third.  Pierre Gasly backed up his stellar qualifying effort to score fourth, yet remains a distant eighth in the standings.

Charles Leclerc enjoyed a clean weekend, starting fifth and finishing fifth as the Ferrari driver looks forward to a trip to Monza, Italy next weekend.  Fernando Alonso made up three spots, including a last-lap pass to score sixth.

Carlos Sainz said he “had zero pace in the car today” yet managed to take seventh. Sergio Perez started from the pit lane, struggled early, then found his pace and in doing so, enjoyed an eighth-place result. Perez also won the Driver of the Day award for his effort and scored valuable points to keep the Constructor’s championship fight close, 334.5 – 332.5 in favor of Mercedes.

Esteban Ocon started eighth, lost a position to his teammate Alonso at the start, and then stayed bogged down for much of the race, ending the day in ninth. Lando Norris, who started in 13th, managed to work his way up to the last points-paying position and finished 10th in what is likely a disappointment for the McLaren driver.

Since the series had not visited Circuit Zandvoort in over 30 years, the experience level rested at the lower end of the scale.  There might have been an expectation the situation could lead to errant moves or silly mistakes.  Instead, the race stayed clean with nary a full-course yellow or safety car to slow the proceedings.

In fact, Sebastian Vettel’s small spin about two-thirds through the race seemed to be the only trouble of the day.  While Nikita Mazepin and Yuki Tsunoda both retired, their issues came from mechanical gremlins and not on-track incidents.

When Verstappen made his clean getaway at the start, he took off in such a commanding fashion that it became difficult not to see him winning. Hamilton did his best to keep Verstappen in sight and effectively hounded him through much of the race but he could never apply the pressure necessary to cause a Verstappen error.

Mercedes did their best to challenge the Red Bull dominance, switching to a two-stop race, but Red Bull easily covered and Verstappen kept his position at the front.  About the only thing that Mercedes could do was to aid Hamilton in getting the fastest-lap bonus point to keep the point standings close.  Overall, Hamilton said it best regarding Verstappen’s win: “At the end of the day, they were just too quick.”

The battles throughout the field also appeared mild. Save for Alonso moving up at the start and then holding his position, little passing occurred.

Sergio Perez made it look easy in carving through the field but he benefitted from driving the best car on the track and maybe could have finished higher had Lando Norris not made life so difficult for Perez. The two put together one of the more lengthy battles of the race but Norris could hold on for only so long and capitulated the position.

– The past two races have offered some elements of unpredictability, both good and bad. Ocon’s win at the Hungarian GP is the kind of wild result the sport needs to upset normalcy whereas the Belgium GP last weekend should have been a washout yet was still classified as a race.  This weekend gave a look at what might be the standard.

Red Bull were not only fast, they covered every strategic development that Mercedes put into action.  When the Arrows switched to a two-stop strategy, Red Bull adjusted rapidly and called Verstappen into the pit.  If anything, the Dutch GP shows that both teams may be at the height of their proverbial games.

Other aspects within the constructor’s battle also became more clear. Ferrari seems to have surpassed McLaren in being the third-best team on the grid.  Both qualifying and race pace offer evidence that the Prancing Horse is starting to congeal into being a player closer to the front of the field.

McLaren, which seems a little lost recently, will now be battling Alpine and their strong lineup.  In fact, if there is any real trouble with McLaren, it might be that Daniel Ricciardo is performing at a disappointing level and failing to match Norris.

– Antonio Giovinazzi notched a stunning seventh-place starting position.  With such a spot in hand, Alfa Romeo should have been doing everything it could to nab a top-10 finish and gain the minimal but critical points.

Instead, Giovinazzi faded to a 14th-place result.  The team clearly failed to use any aggressive strategies available to protect his position and instead seemed to believe he had a car that could keep up with the back-half of the top 10.  This race should be viewed as a wasted opportunity for the team.

– It may seem trivial, but track officials should look at how to address the pebble spills onto the racing groove. It is rare these days to see the amount of trackside debris kicked onto the surface as what we saw at Circuit Zandvoort.  Both the promoters and drivers are fortunate that the pebbles failed to cause any cataclysmic issues.

– What happened to Daniel Ricciardo?  Yes, McLaren may have been off at the Dutch GP but Ricciardo took a 10th-place starting position and did nothing.  For being the so-called Honey Badger, he instead turned in a performance that looked like that of a lemming (no offense to lemmings).

There is clearly something not working with Ricciardo and McLaren and the further the poor form continues, the more McLaren looks like they made a mistake in hiring the Aussie driver.  It would be suspect to think that Ricciardo has nothing left to offer but the team and driver should be pushing to find a way to improve performance because, at this rate, a divorce seems likely.

– Max Verstappen summarized his day: “It’s incredible to win here today on another home track and it feels great to take the lead in the driver’s championship again. Of course, the expectations were very high coming into the weekend and it’s never easy to fulfill that but the whole crowd has been incredible and I am so happy to win here.”

– Lewis Hamilton offered his thoughts accordingly: “What a race and what a crowd, honestly, it’s been an amazing weekend. Max did a great job so congrats to him. I gave it everything I had out there, but they were just too quick for us this weekend. I think even if we’d have got everything right today with the traffic, the pit stops and the strategy, it’d still have been tough to get by them.”

– Pierre Gasly may have been the most jubilant in expressing himself after the race: “P4 is an amazing result today, I don’t think we could really hope for much better and it’s 12 important points for us. I really enjoyed all 72 laps here in Zandvoort, it’s a fantastic track. I had fun today, I’m really pleased with everything, the car is really fast and I managed to get it set-up just the way I wanted. The team did a fantastic job throughout the weekend and today, we were flying!”

Note: Hamilton scored an additional point for setting the fastest lap of the race.