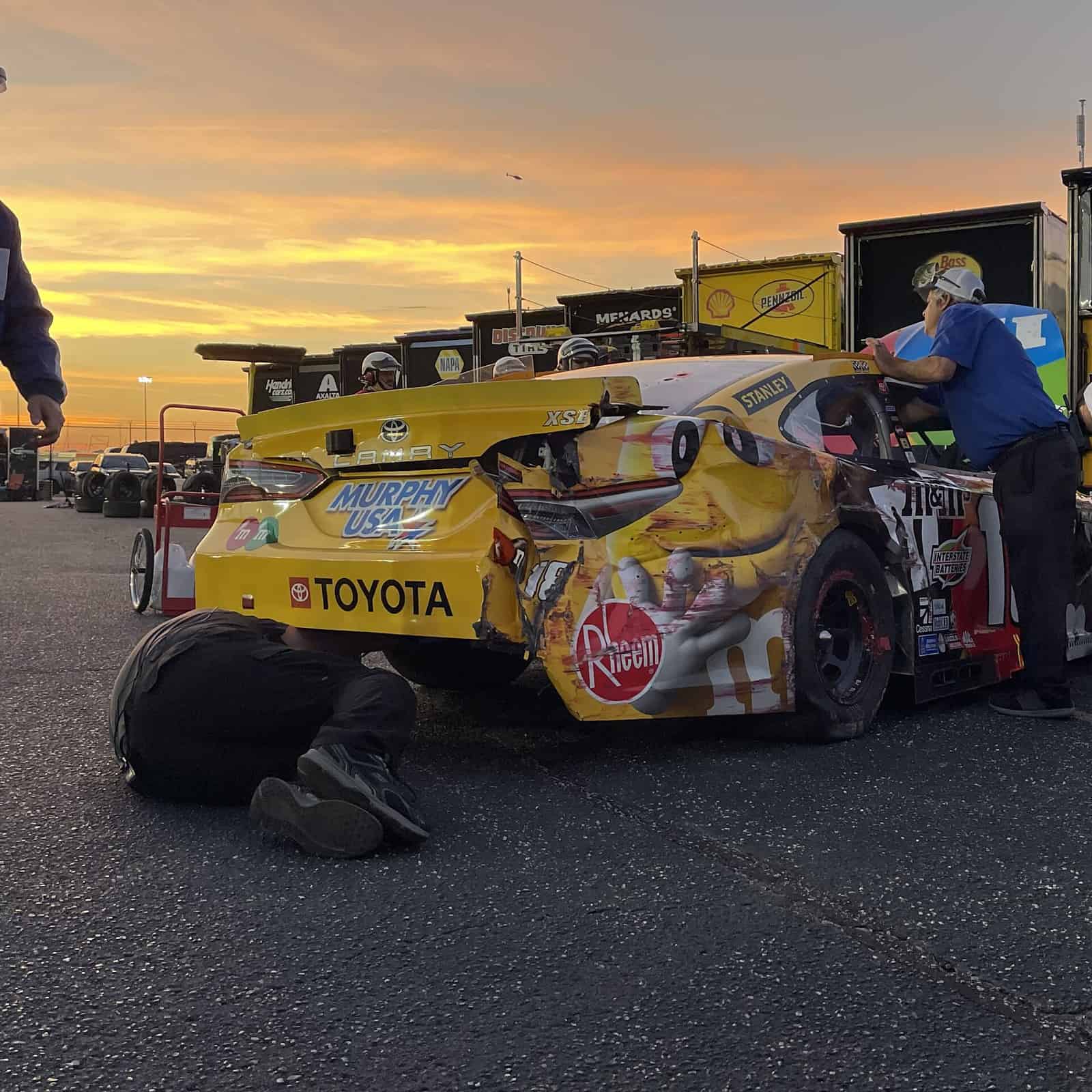 DARLINGTON, S.C. — Kyle Busch was already unhappy with how his No. 18 Toyota was handling.

A crash sure didn’t make the night any better.

Busch’s 2021 Southern 500 came to an abrupt end on lap 126 when his Camry slid sideways and hit the outside wall of turn 2 at Darlington Raceway Sunday night (Sept. 5).

Busch was running at the tail of the top 10 when he entered turn 1 to the inside of Aric Almirola. Almirola held Busch far below the apron on corner entry, which loosened the No. 18 car by the center of the turn.

Busch was already sliding by the time Austin Dillon got to his left rear, ending any chance Busch had to save his Toyota and sending him hard into the outside wall. He became the second playoff driver to officially exit the race after Michael McDowell crashed at lap 31.

Kyle Busch is OUT!

Austin Dillon gets into the No. 18 car, and "Rowdy" goes to the garage for an early exit at @TooToughToTame. #NASCARPlayoffs pic.twitter.com/j3hvPmPpfn

“We’ll just take our lumps,” a frustrated Busch said after exiting the infield care center. “We were running like shit and we got wrecked, so that’s what you get when you run like shit. Shouldn’t be there.”

Despite the on-track circumstances that eventually led to his crash, Busch seemed to take further exception with his own team’s lack of execution instead.

“I don’t know what our problem is, but every time we go to sim and use sim and think we have a good sim session, we go to the racetrack and we suck,” Busch said. “So I’m done with that and we’ll have to use some other tools on figuring out how to be good. […]

“We were running terrible and we got wrecked. It wasn’t the [No.] 3’s fault.”

Busch was clearly frustrated as he drove his car directly to his hauler in the garage area, knocking over a row of orange cones and sending multiple crew members scrambling to get out of the way.

Heading home early means a hit to Busch’s championship hopes, as only Richmond Raceway and Bristol Motor Speedway remain in this first round. While Busch entered these playoffs as the No. 4 seed, earning 22 playoff points, his buffer was just 17 over the cutline entering Darlington.

However, Busch has multiple victories at both Richmond (six) and Bristol (eight). The No. 18 team could easily earn a win there once again.

Understandably, though, Busch was in no mood to discuss next week before soaking in everything that went wrong at Darlington.

NASCAR heads to the second race of this first round on Saturday, Sept. 11 at Richmond at 7:30 p.m. on NBC Sports Network.

Bush should be fined for driving back to his trailer the way he did.

Agree, but I don’t think a fine is enough. I don’t blame the guy being mad, I don’t care what comes out of his mouth, I don’t care that he decided to say “F-it” to his team and call it a day by going straight to the garage, but once you leave the racing surface you have to put those feelings aside and be considerate of pedestrian traffic. IMO, this is one area NASCAR needs to come down hard – anyone who fails to operate their race car in a safe and professional manner off track deserves to sit out an event.