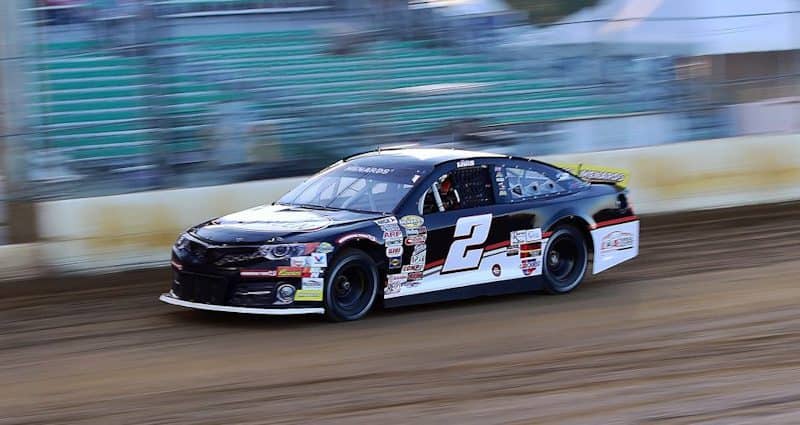 In his second career ARCA Menards Series start, Landen Lewis was perfect. The 15-year-old won the pole, then led every lap Sunday (Sept. 5) en route to winning the Southern Illinois 100 at the DuQuoin State Fairgrounds.

After he finished eighth in his series debut at the other dirt track, the Illinois State Fairgrounds, Lewis drove a flawless race on this 1-mile dirt track. Lewis survived a rough surface, one that caused damage for nearly the entire field, to win on a final one-lap shootout.

“I’m speechless for everything right now,” Lewis told MAVTV in victory lane. “This wouldn’t be possible without any of my guys. Mark Rette, Larry Jones, Austin Theriault, everyone that’s made this possible for me. It’s a dream come true and I’m blessed to be in this spot.”

The MAVTV broadcasters also announced Lewis will also compete in the next race at Bristol Motor Speedway. He’ll drive the No. 30, Rette Jones Racing usual number, in that event.

Who leads every lap to win his first race in just his second ARCA Menards Series start???

What a run at DuQuoin for the 15-year-old ? pic.twitter.com/D5mi2ffQ09

Points leader Ty Gibbs finished second, increasing his points lead over his rival Corey Heim in the battle for the season championship.

In his first start since the DuQuoin race in 2019, 66-year-old Ken Schrader finished third driving the No. 10 car for team owner Andy Hillenburg. 2020 Springfield Mile winner Ryan Unzicker ran fourth after running in second place for most of this race.

Taylor Gray rounded out the top-five finishers after his spin brought out a late caution, setting up the one-lap shootout. Gray finished one lap down.

Behind him was Heim, limping home after sustaining serious damage to his No. 20 Toyota early in the race.

His Venturini Motorsports team repaired the car and Heim returned to the track to ultimately wind up nine laps down in seventh place.

Despite ending up with a DNF, Zachary Tinkle also achieved his career-best performance of eighth place, his first-ever top-10 run. It was his first start driving for Richmond Clubb Motorsports.

Will Kimmel exited the race due to overheating, but he still wound up with a ninth-place finish.

Rounding out the top 10 was Jesse Love. Love endured a crazy day. He posted the fastest time in the practice session but damaged his No. 15 Toyota. His Venturini Motorsports repaired the car, but he was unable to complete a lap in qualifying, thereby starting last (15th).

Love drove through the field into the top 10, but he then spun in front of Gray due to a blown tire.

Although Love stayed on track, his bad luck didn’t end there. Rather, he ran over a piece of debris, which ultimately caused his DNF.

“Nothing really went too right,” Love told MAVTV after exiting his car. “In practice, we were the fastest car. Then hit a piece of lead, tore the nose off the radiator, tore a bunch of stuff off. We didn’t get to qualify. Sorry for the tale. Made up a few spots and then we had a flat tire. Came back down [pit road], went a lap down, got our lap back. Then we had the fastest car on the race track the last five or six laps. I figured a few things out. Then we ran over another piece of lead again. Just nothing we could do about that. The important thing is we had a fast Toyota Camry tonight. Man, it’s some bad luck, it’s pretty crazy sometimes.”

The ARCA drivers next head to Bristol Motor Speedway as the Heim-Gibbs title battle continues. The Bush’s Beans 200 will be the final combination race for ARCA with the ARCA Menards Series East. It will take place on Thursday, September 16 at 6:30 p.m. ET with TV coverage provided by FS1.