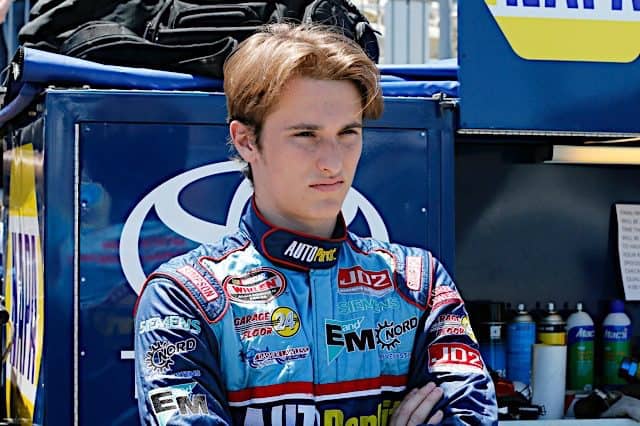 DARLINGTON, S.C. — Lawless Alan was holding his own and trying to make laps in his sixth NASCAR Camping World Truck Series start.

But his Darlington Raceway debut was disrupted by an incident in turn 3, which began when Derek Kraus got into Alan’s left-rear quarterpanel to send the No. 45 Niece Motorsports truck spinning. That contact led to further carnage when Alan hit Hailie Deegan, who found herself an innocent bystander in the lap 107 caution.

Payback for an earlier incident?

The frustration on Alan’s radio was evident in the immediate aftermath of the incident.

"All he's done all year is wreck trucks." ?@lawlessalan25 shares his feelings about the No. 19. pic.twitter.com/sg8Gd0qhNt

Alan, who finished 27th and two laps down, clarified after the race he and Kraus know each other well and entered the race on good terms. However, he was frustrated with what he perceived as Kraus’ mistake.

“Me and Derek have always been good friends, so I don’t think he did it on purpose by any means,” Alan told Frontstretch. “But it was definitely a move that was never going to work. And at that point in the race, I get trying to get every position that you can, but there’s sometimes where you’ve just got to set it up and be a little more patient.

“If he’s faster and really got that big of a run, then I don’t see why it would be a problem to just wait one more lap.”

Kraus, of course, saw the incident differently and was more surprised that Alan slowed as much as he did so quickly.

”I was in line with them and I just felt he checked up really hard,” Kraus said. “I was not expecting them to check up as hard as they did and that’s what I felt like happened. I’m sure he feels differently, but I’ll call him or text him or something this week and explain my side.”

Unfortunately for Kraus, his incident rate this season has done him no favors. In the past six races, Kraus has been officially involved in five cautions. With that has come scrutiny from his competitors.

NAPA Racing didn’t shy away from the heat.

Alan maintained he didn’t feel targeted in any way by Kraus, but acknowledged the anger comes more easily when the driver involved has more accidents on his resume.

“I’m definitely going to keep it in mind in the future. But not personal.”

For Kraus, his goals are centering around finishing races. He leaves Darlington with a 16th-place finish, his best result since running fifth at Knoxville Raceway in July. He sits 12th in points during his second full-time season in the series, failing to make the playoffs both years running the No. 19 Toyota for owner Bill McAnally.

“Things have happened this year [and] some of them I can control, some of them I couldn’t,” Kraus said. “But it’s just part of racing. Everybody’s got bad years and hopefully we can turn it around after this week and finish out our season strong.”

The NASCAR Camping World Truck Series finishes its first round of the playoffs on Thursday, Sept. 16 under the lights at Bristol Motor Speedway at 9 p.m. ET on Fox Sports 1.

For every hit NAPA gets, NAPA always gets a Miss in Return!