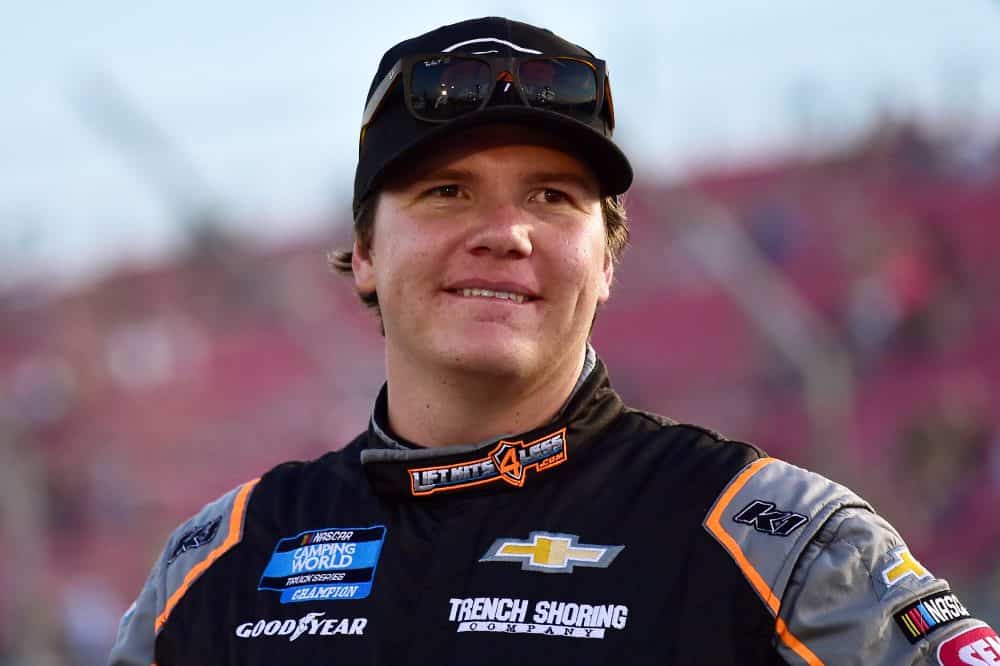 Sheldon Creed finished Sunday (Sept. 5) afternoon’s In It To Win It 200 at Darlington Raceway where he started: out front.

Creed dominated throughout the race’s 147-lap running, holding off challenges from Kyle Busch Motorsports teammates John Hunter Nemechek and Chandler Smith to win the second stage and, ultimately, the race. Creed’s third win of 2021 came as a hard-charging Nemechek fell short on the final lap, the No. 4 bouncing off the outside wall as he attempted to catch the leader.

Creed has now won the first two races of the playoffs, and with Sunday’s win, he swept both Darlington races in 2021.

“What a way to open the playoffs, right?” Creed said after some burnouts on the frontstretch. “Started the day really, really loose and I was like ‘oh, no, we’re in trouble here.’ But the guys worked on it, pit crew killed it all day […] we had a tough season, but we’re finding [it] at the right time and it feels so good to get back-to-back wins.”

Pole sitter Creed led from the outset, eventually surrendering to Nemechek as the No. 4 shot by. Everyone pitted at the competition caution, with playoff driver Austin Hill penalized for speeding. That was quickly followed by a caution flag for debris.

Colby Howard brought out another yellow when he slid off the exit of turn 2, but the constant interruptions didn’t interfere with Nemechek, who cruised to the stage one victory.

Creed bounced back out front in stage two as teammate drama unfolded behind him, with GMS compatriots Smith and Tyler Ankrum making a bit of contact while battling for position. The No. 2, meanwhile, was succeeded by Smith on lap 64 as the No. 18 went to the point. However, Smith’s time in front didn’t last long before another caution flew.

Ben Rhodes dove into turn 3 as he attempted to pass GMS’ Jack Wood on the bottom, but he slid up as Kris Wright moved underneath both of them. Rhodes got into Wood while Wood hit the wall, and subsequent contact between Rhodes and Wright sent Wood spinning and Wright into the outside barrier.

Rhodes kept his truck facing the right direction, but the front end of his Toyota was severely caved in. The crash left him in a precarious position for the championship, just 15 points ahead of the cutline after a 34th-place result.

After the restart, with laps winding down in the stage, Nemechek battled Creed for the top spot. His KBM stablemate Smith remained in the mix, the trio pulling away from the field.

Smith sent his truck into turn 3 on the final lap and was able to complete a pass on Nemechek, good for second in the stage, but Creed took top honors as the green-and-white checkered flag flew. The third KBM truck, piloted by Dylan Lupton, had far less to write home about during those laps, as he smacked the wall and limped the No. 51 to pit road.

Creed again retained the lead as stage three got underway, and while no yellow flew for Tanner Gray brushing the wall, it did for an incident just moments later. In an apparent payback, Derek Kraus punted Lawless Alan‘s No. 45 truck and sent him around, with Hailie Deegan getting a piece of the latter’s machine as he slid down the track.

"Somebody needs to knock that kid's teeth out." ?

"Someone needs to knock that kid's teeth out. That's all he's done all year, wreck trucks." @lawlessalan25 had some choice words for @derek9kraus after that wreck ?#NASCAR #InItToWinIt200

Serious question @NAPARacing – do you sponsor Derek Kraus because he’s never finished a race without needing lots of replacement parts?

Another early-stage caution marred the first laps of the final stage, but KBM set their sights on Creed once the green flag flew again. Smith and Nemechek ran second and third, respectively, as the former looked for any opportunity to get a nose underneath the No. 2.

“The KBM trucks were moving there on the short run,” Creed explained. “Even on the long run, I thought they were better than us just with track position. I could just kind of go where I wanted when I was in front. If I got behind them, I was going to be in big trouble.”

Smith eventually fell back while Nemechek continued his pursuit of Creed, but less than a second separated the pair with five laps left. Adding to the stress for both of them was Friesen, who was flying on new tires and had caught Nemechek in lapped traffic.

With four laps remaining, Tyler Hill suffered damage and crawled down the frontstretch, but no caution flew. That left Creed sailing on to his third win in the four most recent playoff races.

“[The team is] tense, they’re serious about it,” Creed said of a different approach he’s had for this year’s postseason. “I’m just trying to enjoy it. Last year, I was super serious about it, and I had fun, but I just wanted to remember it more this year and have more fun with it. Gotta put the pressure on the other guys, I had nothing to lose, really, coming in, so we got fast trucks.”

With their annual event at Richmond Raceway scheduled earlier in the season, the Truck Series has a week off before they compete in the UNOH 200 presented by Ohio Logistics at Bristol Motor Speedway. That race is set for Thursday, Sept. 16 at 9 p.m. ET and will air on Fox Sports 1.