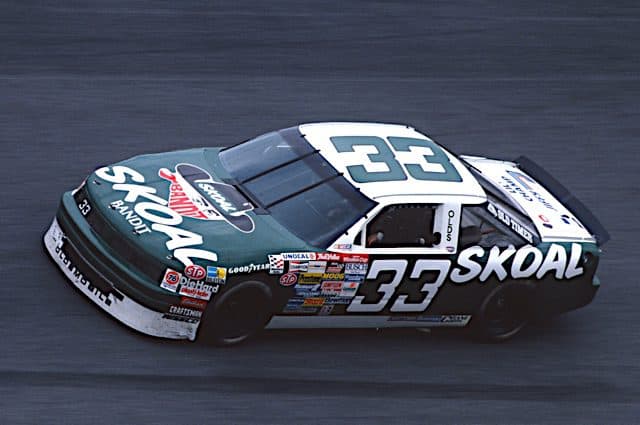 Visits to Darlington Raceway always recall memories of NASCAR legends.  After 70 years, the Lady in Black has provided some of their greatest moments, superstars reaching their peak as they capture checkered flags at the historic track.

Yet in one case, a win in Darlington’s Southern 500 was just the beginning of one of NASCAR’s most unexpected winning streaks. Thirty years ago this weekend, veteran racer Harry Gant scored the first of four consecutive Cup Series wins.  Victories at Darlington, Richmond Raceway, Dover International Speedway and Martinsville Speedway earned the popular wheelman from Taylorsville, N.C. a new nickname: “Mr. September.”

Gant, by the way, accomplished this feat at age 51.

Those who were familiar with Gant decades ago knew he was a great racecar driver. Rising through the ranks of stock car racing, Gant is said to have won hundreds of short track races in the 1960s and 1970s.

But consistent success and a big break at NASCAR’s top level eluded Gant for several years. He only began devoting most of his time to the Cup Series in 1979, when he was already 39 years old.  Gant didn’t win his first Cup race until 1982, by that time piloting the Skoal Bandit car with which he is most associated.

Gant remained a top 10 Cup Series driver throughout the mid-1980s, but his style remained that of a reliable, veteran racer. As strong as Gant was, he was not the type of driver you would expect to suddenly go on a hot streak and be nearly unbeatable for almost a month.

Gant went through a few lean seasons in the late 1980s until joining forces with Leo Jackson in 1989, taking Skoal and the No. 33 with him. Gant would win one race each in the 1989 and 1990 seasons, the 10th and 11th Cup Series wins of his career. By the time 1991 had concluded, Gant added another five: one win at Talladega Superspeedway in the spring and four consecutive wins in September that proved he was far from done as a NASCAR driver.

The 1991 Southern 500 featured a battle between Gant and Davey Allison. Allison started on the pole and was strong early, but Gant was able to take control of the race later on, leading the final 70 laps on his way to victory.  It was Gant’s fourth win overall at Darlington and his second in the Southern 500.

“I feel good,” Gant said in victory lane.  “I figured that was the only way I’m going to beat [Allison] today. He may be younger, but I can wear him out.”

One week later at Richmond, Gant found himself chasing Allison for the lead again. After tailing Allison’s Ford for about 10 circuits, Gant nosed his Oldsmobile into the low groove and ran side-by-side with the No. 28 for several laps. Thanks to a big run off turn 3, Gant made the decisive pass with 19 laps to go and drove off to victory.

The win was a fantastic result for Gant, who got spun while racing for the lead earlier on lap 312.  Not only did he keep his car off the Richmond wall, he gained a position despite the spin.

For win number three at Dover, there was no need to wear the competition out this time. Gant led 326 of the final 330 laps on a grueling afternoon for man and machine. During the 500-mile event, the Monster Mile knocked out 24 of the 40 cars that began the race. Gant himself had to battle some electrical gremlins throughout the day. But when the dust had settled, the No. 33 was in victory lane again.

“We got a pretty good streak going,” Gant said after the race. “We was hoping to win one more race this year, but we got one today, so maybe we can get another one.”

And that was exactly what Gant did one week later at Martinsville. Once again, he emerged as a contender in the second half of the race. But on lap 376, disaster struck when Gant got turned by Rusty Wallace while trying to hold the lead.  Spinning backwards into turn 3, Morgan Shepherd hit Gant’s Oldsmobile, crumpling the right front fender.

Crew chief Andy Petree and the No. 33 team sprang into action, making some quick repairs to keep Gant on the lead lap. However, with less than a quarter of the race left and all his track position gone, it appeared Gant’s winning streak was done for.

Martinsville has always been a notoriously tough track to make up ground, yet Gant was not to be denied.  He sliced his way through the field and took the lead back on lap 454, never relinquishing it for the rest of the race.  To the amazement of just about everyone in Martinsville, Gant captured the checkered flag and scored his fourth win in a row.

“I really didn’t know (how the car was) to start with until I got to fifth,” Gant said. “When I got to fifth, I knew I could [win], ‘cause all I had to do then was keep in mind not to wear the tires out, just take my time.  When I started backing off, I started catching them real easy then.”

Miraculously, Gant almost extended his streak to five in a row.  He dominated the next race at North Wilkesboro Speedway, leading 350 of 400 laps.  But when he began to experience a brake issue in the closing laps, Gant could not hold off Dale Earnhardt. September 1991 ended with four wins in a row for Gant and one second-place result.

Gant won two more Cup Series races in 1992, the final victories of his career. At the time of his last victory, at Michigan International Speedway, Gant was 52 years, seven months, and six days old.  He remains the oldest driver to ever win a Cup race.

Although he retired after the 1994 season, Gant remains a popular figure among NASCAR fans of the 1980s and 1990s. Even 30 years later, his winning streak is a powerful representation of how the hard work, determination, and expertise of a veteran racer paid off with satisfying results. Truly, Gant lived up to the nickname of “Mr. September.”

Part of the streak was due to Andy Petree using negative camber to give the #33 an advantage until NASCAR put limits on it when there were axel failure. Junior Johnson did the same for Bill Elliott in ’92. I’m not sure, though, whether Gant had that advantage in Busch Grand National portion of the streak.