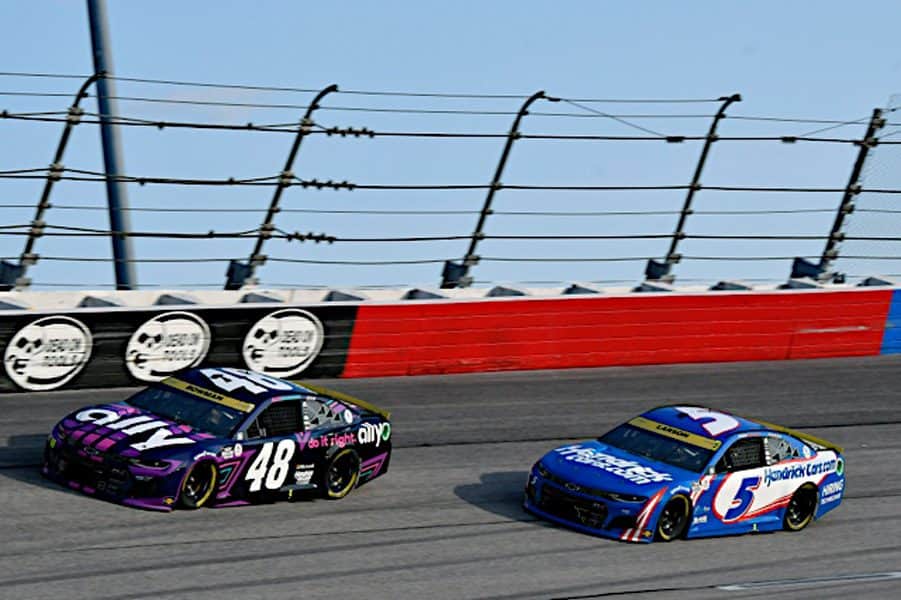 But whatever momentum they carried into the postseason was largely wiped away over the course of 500 miles at The Lady in Black — at least for three of the organization’s four drivers.

Kyle Larson finished second after an amazing, last-ditch effort in turns 3 and 4 put him against the fence and fell just short of beating Denny Hamlin for the Southern 500 title. He then pounded the wall hard in turn 1 with a flat right-front tire, bringing even more damage to the No. 5 Chevrolet.

RETWEET to congratulate @DennyHamlin on his #Southern500 win at @TooToughToTame!

What a final corner battle with Kyle Larson! #NASCARPlayoffs pic.twitter.com/JsHuhMAcQm

Turns out Larson was the only HMS car to score a reasonable result. Teammates Alex Bowman and William Byron collided after Bowman suffered a tire failure in turns 3 and 4 on lap 17. While Bowman rode the outside wall, Byron slid sideways and crushed his right-rear quarter panel into Bowman’s left rear.

That put both the Nos. 24 and 48 behind, but things went from bad to worse when Byron suffered a left-front tire failure entering turn 1 and hammered the SAFER barrier at lap 200.

Chase Elliott, the defending Cup Series champion, wasn’t immune from the calamity of Sunday night. He, too, suffered a left-front tire barrier and contacted that turn 1 outside wall on lap 327, ending his day 40 laps early.

.@NASCARonNBC takes a closer look at what happened to @chaseelliott late in the #Southern500. #NASCARPlayoffs pic.twitter.com/u3CZiKu7fb

Larson, in large part thanks to his five regular-season victories, still left the track with a good finish, slipping to the No. 2 spot in points behind only race-winner Hamlin.

But Elliott sits 10th after a 31st-place finish, just four points above the cutline. Bowman and Byron, meanwhile, are on the outside looking in. Bowman sits 13th, tied with Tyler Reddick but currently out because Reddick notched the higher finish on Sunday; Byron is 15th, nine points behind the top-12 cutoff.

Byron was blunt and to the point about his situation: “It sucks,” he said at the infield care center.

The goal now becomes digging out of an early points hole, a challenge that begins next weekend at Richmond Raceway where Byron’s best finish is seventh, which came in April.

“I think we can run decent at Richmond and try to go win Bristol or Richmond — try to win both,” he said. “We’ll see.”

When so many teammates encounter so much misfortune in the same race, it’s easy to see morale could take a hit. Byron’s focus is negating that as much as possible.

Elliott’s disappointment was evident after his crash but was encouraged by Larson’s pace even mid-interview.

When asked how Hendrick rebounds from a bad day when he and two teammates had trouble, Elliott was more centered on Larson’s fight for the lead.

Larson wound up one spot short of definitively locking himself into the next round, but his consistency throughout the contest allowed him to be more willing to make moves that involved higher risks.

The remnants of what putting it all on the line for a #Southern500 looks like:#NASCAR pic.twitter.com/54BOLmMV8S

“Knowing how far above the cutline we were to start the race and finishing top two in the stages and finishing second there in the end, I knew I could go for broke a little bit more there the last handful of laps,” Larson said. “I was obviously hitting the wall every lap in three and four and I felt like if I got a flat and finished 25th, I was still going to be good in points.”

Now, he’s the only one of his teammates who could say that entering Richmond, a shocking turn of events for a program that won nearly half the races during the regular season.

HMS will try and right the ship this coming weekend at Richmond. The Salute to American Heroes 400 kicks off at 7:30 p.m. ET on Saturday, Sept. 11 with TV coverage provided by NBC Sports Network.