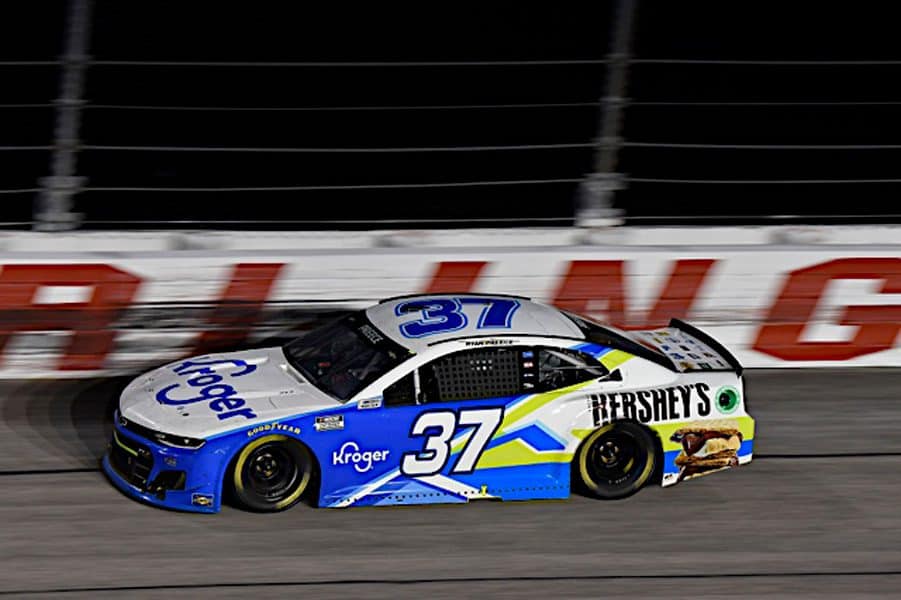 What’s the best medicine when you find out you will be job searching for 2022? Most drivers would tell you that getting back on track is their preference. For Ryan Preece, that was likely the case at the Cook Out Southern 500 at Darlington Raceway (Sept. 5).

Days after learning his JTG Daugherty No. 37 team will cease to exist after the season, Preece put together a solid run for the resume reel. He ran inside the top 15 for most of the night, staying consistent en route to a 12th-place result at the Lady in Black.

It was an overall solid effort for Preece and his No. 37 team. While many playoff and non-playoff drivers fell victim to the Lady in Black, Preece was able to have a good grip of it throughout the race. Other underdogs may have made more noise, but Preece slipped through quietly to lead the charge. In fact, the Berlin, Conn. native was as high as 10th with under 20 laps to go before losing two positions.

Preece wasn’t exactly immune to threats throughout the race. On lap 125, Preece sustained minimal damage on his car. Fortunately, it was not enough to ruin his night. From there, it was a consistent, impressive drive from the 30-year-old. Preece’s No. 37 could be spotted at the front half of the field for a majority of the night, and avoiding detrimental issues allowed him to pull off the strong result.

The result finishes off a rollercoaster week for Preece. The JTG-Daughtery Racing driver nearly pulled off an upset in the regular season finale at Daytona International Speedway last week, grabbing in a fourth-place result. A few days later came the news he was without a Cup ride for 2022. The result at Darlington may add another level of interest from teams, and it may not necessarily be in the Cup Series.

“I want to be a racer, I want to be one of the best racers,” Preece told SiriusXM NASCAR Radio on Sept. 1. “So, as far as offers right now, there’s nothing, no, not really. I’m just waiting for that next opportunity to go out and win races. It’s not me just talking about it. I’ve proved it over and over again, so hopefully that moment comes sooner than later.”

Despite the uncertainty that has been echoed due to his car not being chartered, Preece is exactly right: he has displayed that talent numerous times, and people know it. In his first NASCAR Camping World Truck Series race at Nashville Superspeedway in June, Preece won for DGR Racing, becoming only the sixth driver to win in their truck debut. Add that to a list of multiple modified wins and Preece’s resume is even more impressive.

And while it has not been the season Preece and his No. 37 have been looking for, he has improved his results in 2021. He has already surpassed his top five and top 10 total from 2020, and has eight top 20s this season in comparison to seven at this point a year ago. Needless to say, Preece will likely land a ride somewhere, whether it’s in the Cup, Xfinity or Truck series.

As the NASCAR playoffs are beginning to circle full force, we continue our watch on NCWTS playoff underdog Carson Hocevar and the commencement of Michael McDowell’s Cup playoff run.

McDowell’s debrief from the first playoff race is short. That’s because his night came to an end on lap 31. Out of the 16 playoff drivers, at least 11 suffered an issue in the race, but McDowell was the first to be eliminated. As he was coming off turn 2, the No. 34 Front Row Motorsports Ford slid up the track, made brief contact with the outside wall, and spun headfirst into the inside wall. The damage was terminal, and an already long-shot bid to advance in the playoffs for McDowell has become almost impossible in the process. It will take something even more massive than his Daytona 500 to pull it off.

Hocevar entered the second race of the playoffs seventh in the standings with a 13-point cushion. He left in the same position with a slim, eight-point advantage. It was a relatively quiet afternoon for the Niece Motorsports driver, running in the top five early and maintaining speed throughout, though he did have to overcome a pit equipment issue late in the race. In the end, Hocevar scored an 11th-place finish, a solid result that keeps him in position to advance to the Round of 8.

Along with Preece, Daniel Suarez had a quietly solid evening in South Carolina. After he too came just short of pulling an upset at Daytona, Suarez finally had the overall solid night he had been looking for to capture a 13th-place finish. It was a team effort for the No. 99 Good Sam Chevrolet team, as Suarez charged up the leaderboard throughout the night.

As each run went by, Suarez’s running position appeared to go up. Despite some slow pit stop cycles, Suarez was able to avoid trouble and brought home a top-15 result. It was his first such finish since the second race of the Pocono Raceway doubleheader in June.

“I feel like we were probably a top-20 car most of the day,” Suarez said following the event. “We struggled. We made some adjustments to get it back and I thought we did a pretty good job keeping up with the race track and everything. But we just have to keep working. It was a good education day, but we didn’t have a lot of speed. So, we have to keep working to make more speed.”

Once again, he may not have been the top underdog, but Corey LaJoie was the show of the night for the little teams, finishing in 15th. The No. 7 Chevrolet looked like the little engine that could. LaJoie climbed through the field throughout the race, clawing inside the top 10 in stage two. LaJoie challenged several playoff drivers, and was the second-highest non-playoff car for a large part of the race’s second half. The performance earned him valuable television time, and it continued to exemplify just how much LaJoie gets out of his equipment.

His car did not seem like the underfunded machine that it is, and it should have earned him a top 10. Unfortunately, he was caught one lap down during a green flag pit cycle that involved a caution. The Charlotte, N.C. native got his lap back, but was unable to get back to the top 10. All things considered, this night should pump a double dose of encouragement into Spire Motorsports and the future they have with this young driver. LaJoie radioed in to his team following the race, saying, “I don’t care where we finished. Best race of the year.”

The NASCAR Xfinity Series started off the tripleheader weekend with a bang, including notable performances from some underdogs. The career season for Jeremy Clements continued, as he scored his seventh top 10 of 2021 with an eighth-place showing. It was his first top 10 since Atlanta in July, a much needed result for a driver looking to hang on to a playoff spot. With two races to go, Clements comfortably sits in 11th in the playoff standings, holding strong to a 78-point advantage.

Alex Labbe also scored one of the underdog results of the weekend. The DGM Racing driver scored his second top 10 of the season, mirroring the 10th-place result he scored at Darlington earlier this season with another one this past weekend. The result was his ninth-career top 10 showing.

While the annual NASCAR throwback weekend was shifted to the first Darlington race in May, there was not an absence of tributes this weekend. Rick Ware Racing driver Josh Bilicki threw it back to Rusty Wallace’s 1994 scheme, sporting the iconic black and gold livery.

It’s raceday here at the famous @TooToughToTame! Catch all the action tonight at 6pm est on @NASCARonNBC pic.twitter.com/hd4x6hbeLk

Virginia is for Racing Lovers! As a Virginia boy myself, I am absolutely pumped for the next venue that both the NASCAR Cup and Xfinity series will travel to next. Both head to Richmond Raceway for a doubleheader on Saturday, Sept. 11.

There’s just two races to go in the NXS regular season while it’s the second race of the 2021 Cup layoffs. Both should give fans a night to remember, peaking with Saturday night as the track honors all those who will never be forgotten from the tragic events of Sept. 11, 2001.

Stayed out of trouble and ran our race.@Daniel_SuarezG brings it home P13 at Darlington? pic.twitter.com/Wb0kMzkshW

Rarely do I have fun two weeks in a row. My @SpireMotorsport team deserved a top 10 but cautions didn’t fall right for us at the end. P15 #s7ackingpennies