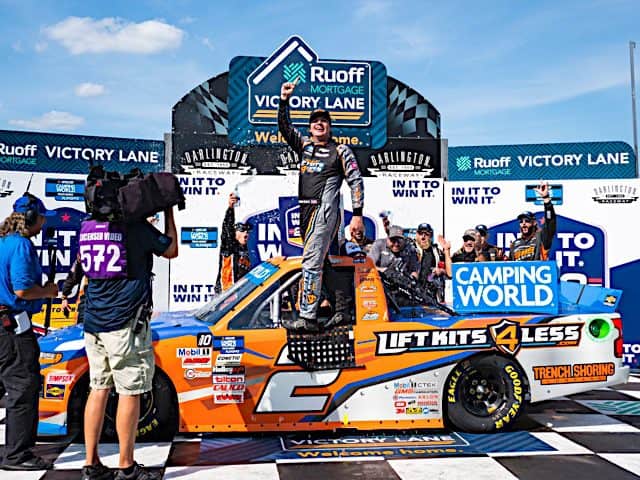 In a Nutshell: Domination by Sheldon Creed was the theme of Sunday (Sept. 5) afternoon’s event at Darlington Raceway, as the reigning champion led 104 of the 147 circuits en route to his third win of the season and second of the NASCAR Camping World Truck Series playoffs’ opening round.

The top two Kyle Busch Motorsports trucks fall under this category: Nemechek, at times, was seemingly catching Creed for the top spot, but never could quite get there in the closing laps. Nemechek did lead 39 circuits while teammate Chandler Smith led four, the trio accounting for every single lap led of the race.

Nemechek’s time out front more than qualifies him for the win that could’ve been, but Smith was no slouch himself: despite leading only those four circuits, the No. 18 was fast all day and at times seemed to have the fastest truck, especially during stage two. Smith faded late, but he ran better than his result indicated.

Let’s also include Friesen in this little party, who was flying on fresher tires and had nearly caught Nemechek by race’s end. Friesen has had a quiet season, completing just 93% of the series’ laps this year and only recording five top-five and six top-10 finishes. Sunday’s third-place effort actually marked the best finish he’s had all season.

Friesen has also led just 14 laps all year and his average finishing position is south of 15, but he’s come home in the top four in two of the past three asphalt races at Bristol Motor Speedway, where the series goes for the cutoff race in two weeks. He also sits in the top half of drivers in position to move on, so barring an absolutely disastrous race at Bristol (like, crashing-on-lap-1 disastrous) he’s likely in good shape for the Round of 8.

While it was indeed a day race, no losses of power plagued Sunday’s race like they did the playoff opener at Gateway.

There were, however, a number of crashes and spin-outs that ended with playoff drivers damaged and tempers flaring.

The biggest incident in terms of trucks involved was when an attempted pass from Ben Rhodes went awry, sending the No. 99 up into Jack Wood and involving a bystander in Kris Wright. Rhodes kept his truck straight while the other two spun, but suffered significant damage and finished 34th.

However, the most notable incident came shortly thereafter, where Derek Kraus punted Lawless Alan‘s No. 45 truck. Hailie Deegan clipped Alan as well, but Kraus’ actions were seemingly payback for an earlier incident.

Payback for an earlier incident?

Alan’s radio was far from complimentary of the No. 19 truck.

"Someone needs to knock that kid's teeth out. That's all he's done all year, wreck trucks." @lawlessalan25 had some choice words for @derek9kraus after that wreck ?#NASCAR #InItToWinIt200

In the wake of that crash and a number of other incidents involving Kraus this season, Alan truck owner Niece Motorsports lashed out on Twitter, leading to a very extensive back-and-forth between their account and Kraus sponsor NAPA Auto Parts.

Serious question @NAPARacing – do you sponsor Derek Kraus because he’s never finished a race without needing lots of replacement parts?

With Creed locked in, nine drivers are vying for seven spots in the Round of 8. Zane and Chandler Smith head to Bristol as the bottom two drivers in danger of elimination.

Take a look at the #NASCARPlayoffs leaderboard for the #CampingWorldTrucks after two races in the Round of 10.

Nemechek, Crafton and Friesen are all well above the cutline, all more than +30, while the following four drivers are packed into a span of just 15 points.

Rhodes sits 15 ticks above the cutoff and Gilliland is the only other driver in that +15 or less category, just 11 above. Hocevar is +8 and Austin Hill +5, with the opening round of the playoffs seemingly not very kind to drivers named Smith: Zane is five points below the cutline and Chandler sits -12 heading to Bristol.

Half of the drivers have had their first two races go entirely different ways, with Nemechek, Rhodes, Gilliland, Zane Smith and Chandler Smith all recording one finish inside and one finish outside the top 10.

Creed, meanwhile, has two wins to his name, and Crafton, Friesen and Hocevar have all finished inside the top 10 in both races. Hill has had the worst luck of all 10 drivers, finishing 23rd at Gateway while a pit road penalty derailed his Darlington dreams and he finished 12th.

Point Report: Creed couldn’t really improve much, having already advanced by way of his Gateway victory, but Nemechek is up by 32 points on Crafton. Friesen and Rhodes round out the top five.

? "He might be the worst one in the Truck Series." – @Tjmajors on @dawsoncram41, who has been racing with @HailieDeegan for 24th.

More mistakes today. Jack failed on the 2nd stop then made a big mistake trying to maximize pit road trying to get around the 88 and spun myself. Came from the back 3 times to finish 9th. 5 points out heading into Bristol.

Tough race but still learned a lot. Onto the next one. @GMSRacingLLC pic.twitter.com/X0JTzdxnI0

Up Next: It all comes down to the Last Great Colosseum for the Truck Series, as Bristol Motor Speedway looms as the cutoff race before the Round of 8. The 200-lap UNOH 200 is scheduled for Thursday, Sept. 16 at 9 p.m. ET with coverage on Fox Sports 1.