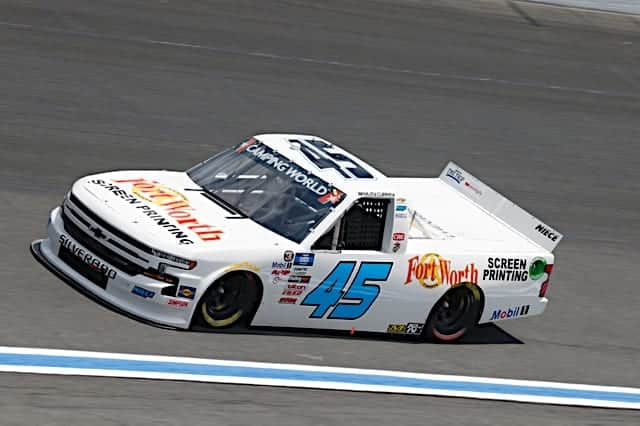 Hacker will race for the team at Las Vegas Motor Speedway on Sept. 24 and again for the series’ penultimate event of 2021 at Martinsville Speedway on Oct. 30.

“I’m excited to join Niece Motorsports for Las Vegas and Martinsville,” Hacker said in a team release. “Over the past several seasons Niece Motorsports has built a successful winning foundation in the Truck Series and I’m happy to now be a part of that circle.”

Proud to announce that I’ll be driving the number 45 @NieceMotorsport truck at Las Vegas and Martinsville later this season. Thank you to everyone that made this possible. So blessed to have the opportunity ??@charredflags | @TeamChevy https://t.co/2mQmTX2I3H

Hacker has one Truck Series start under his belt earlier this year at Worldwide Technology Raceway at Gateway, where he raced for Reaume Brothers Racing in a partnership with On Point Motorsports, finishing 27th.

He also placed 10th at an ARCA Menards Series event at Charlotte Motor Speedway earlier this year for Cram Racing Enterprises, with whom he was originally scheduled to make select Truck starts in 2021.

“It’s great to have Chris join the team,” Niece general manager Cody Efaw said. “His experience behind the wheel at Gateway will definitely help him since we have such limited track time this season.  We’re looking forward to seeing what he can accomplish with Niece Motorsports.”

Niece currently has one driver in the Truck playoffs in Carson Hocevar, who currently sits seventh, eight points above the cutoff.

It has not been announced which Niece truck Hacker will pilot later this year. The team fields full-time rides for Hocevar and Ryan Truex, while the No. 45 is a full-time entry with a variety of drivers. The No. 44, meanwhile, runs part time.