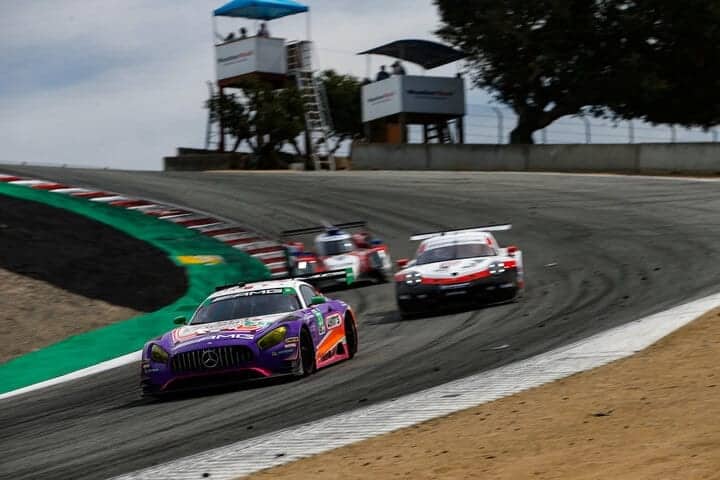 LMP2 has four teams entered.  Era Motorsport’s Kyle Tilley is still out after his recent injury.  As a result, Ryan Dalziel has been deputized once again.  He’s paired with Dwight Merriman, who had multiple incidents at Le Mans that resulted in the team being forced to withdraw prior to the start of the race.

GT Le Mans continues on with just three entries as it comes towards the conclusion.  These are the two Corvette Racing Chevrolet Corvette C8.Rs and WeatherTech Racing’s Porsche 911 RSR-19.

The GT Daytona class has 13 teams entered.  The biggest change here is that The Heart of Racing has expanded to two cars for both Laguna Seca, Long Beach and VIR.  Team manager Ian James will be in the new No. 27 alongside former full-time teammate Alex Riberas.  Riberas has spent most of the last 18 months racing in New Zealand and given the current COVID-19 pandemic, had more or less been unable to leave the country.  He was supposed to drive the No. 23 last year alongside James and Roman DeAngelis before the lockdowns happened last year.

UPDATE: Compass Racing announced Wednesday (Sept. 8) that Jeff Kingsley is out for this weekend’s race.  He will be replaced by Jacob Abel, a recent graduate of the HPD GT3 Academy who competes full-time in Indy Pro 2000 presented by Cooper Tires.  He is currently sixth in points with two third-place finishes at Road America and Mid-Ohio.  He’s also part-time with Racers Edge Motorsports in Fanatec GT World Challenge America Powered by AWS.  In four starts there, Abel’s best finish is third in Pro-Am, fifth overall in the second race at VIR in July.  Laguna Seca will be Abel’s IMSA WeatherTech SportsCar Championship debut.  No reason was given for Kingsley’s absence.

NTe Sport and Gilbert/Korthoff Motorsports, who were on the grid in August at Road America, are not entered this weekend.  NTe Sport’s plans are unclear for the remainder of the season.  However, Gilbert/Korthoff Motorsports indicated to Frontstretch prior to the WeatherTech 240 at the Glen in July that they plan to focus on the eastern races for the remainder of 2021.  Based on that statement, they are most likely to return in October at VIR.

The Hyundai Monterey Sports Car Championship is scheduled to go green at 4:10 p.m. ET Sunday afternoon.  The race will air live on NBCSN.