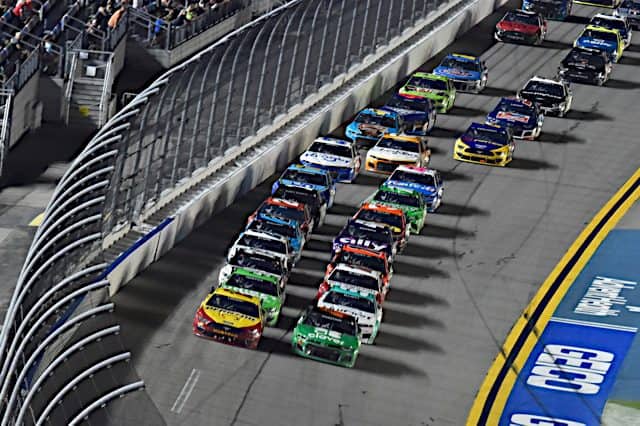 NASCAR always has a ratings free fall once football starts. Seeing that the NFL season starts this week, what can NASCAR do to combat that in the future? – Damon P., York, Pa.

At the risk of sounding like a broken record and beating a dead horse … shorten the schedule.

I’ve come to the realization that doubleheaders just aren’t going to happen. And with the potential news of Pocono Raceway cutting back to one date, that eliminates the one doubleheader weekend on the NASCAR Cup Series schedule. *whomp whomp*

.@NASCAR is tentatively set to announce the 2022 Cup Series schedule next week, per sources.

➖ Among the notable moves, @WWTRaceway (AKA Gateway) near St. Louis is expected to get a Cup race, while @PoconoRaceway is expected to lose one. pic.twitter.com/NR4AviTDVy

As long as NASCAR is locked into this TV deal (through 2024), 36 points paying races will remain on the schedule. So this idea is probably unrealistic. But starting the season in mid-February and ending it by the end of September or early/mid October still is a possibility.

The potential for an Indianapolis Motor Speedway oval/road course doubleheader is there. So is Charlotte Motor Speedway and Darlington Raceway in the same week.

Will it happen? Doubtful. But the NFL is a machine, an unbeatable one at that. And other leagues realize that. NASCAR’s ratings will still be good, but it won’t ever beat the NFL with regularity. Even their preseason games and games in London that start at 9 a.m. ET get ratings that other leagues would dream of.

See also
Did You Notice?: Major U.S. Markets Without a NASCAR Cup Race

Make people crave the product. Part of the reason the NFL is so successful is because it’s short. Seventeen games, every Sunday, appointment viewing. You know your team won’t be playing all year long and will only have, at best, a few months to play.

NASCAR takes up 10 months out of the year. It’s too long, as is the 36-race schedule. If the television partners and sanctioning body don’t want to implement midweek races and weekend doubleheaders, shortening the season (not too drastic) is the way to go.

They had to do something, and the rule violated in the specific penalty was applied correctly. So, yes, by the letter of the law, they did indeed get it right.

12.5.2.5.a: "Any violations deemed to compromise the safety of an Event or otherwise pose a dangerous risk to the safety of Competitors, Officials, spectators, or others are treated with the highest degree of seriousness. Safety violations will be handled on a case-by-case basis" https://t.co/CWn8wRh0UO

“On a case-by-case-basis” is the key here, and in this case, NASCAR deemed the move in question from Kyle Busch a finable offense, $50,000 at that.

It’s not the first time Busch has done something like this, either. I remember vividly a couple years ago at Bristol Motor Speedway (what year was it? Anybody remember?) when he was frustrated, drove his car to the garage and may have struck a fan walking around.

Regardless, this was a blatantly dangerous move. Fans and crew members alike assume the risk when on pit road. You have to always be alert for flying lug nuts, tires, debris and even cars. But those cones are there for a reason.

They’re there to slow the driver/car down to make a safe entrance into the garage. Thanks to FOX Sports’ Bob Pockrass, we found out they’re also there for a legit reason: scoring.

The cones are there to encourage a wide turn into the garage so the transponder (which is closer to rear of car) crosses the timing line at the start-finish line and give driver credit for the lap. https://t.co/2Kb1YAGF3d

Busch blatantly ignored all those things, with safety being the paramount reason for the fine. Will $50K break the bank for KFB? Absolutely not. But it’s the principle more than anything else. Don’t put yourself and anybody else at an unnecessary risk just because you’re pissed off.

Kyle Petty said it well on the NBCSN broadcast after Busch’s interview, where he dropped two dirty words. Paraphrasing: apologize for the language, but don’t apologize for the passion. Busch’s passion and refusal to lose is second to none. That shouldn’t come at the expense of anybody’s safety, though.

Davey Segal is one of Frontstretch’s lead reporters, our Video Editor in charge of YouTube content and does a TikTok recap every week on his Twitter feed. Check out his latest work here.

…but with some exciting news!

? Thrilled to share that my weekly TikTok recaps will be posted on the official @NASCAR channel for the remainder of the 2021 season! ?

The F1 schedule is March to December. That’s…10 months.

F1 also has a much larger international audience and barely runs 20 or so races.

It has been true for years that the NFL was far more popular than Nascar when the two go head to head. The gap between the two continues to grow each year.
And if you sum up all the college games shown each weekend they likely exceed the single nascar event shown each Saturday.
Regardless nascar ratings have dropped to where a 3.0/+ rating is virtually unheard of. What is the cause of this, I cant say. But the days of nascar being considered in the same breath is likely gone forever..

NASCAR has hurt themselves with everything from car designs, point systems and team ownership. They should think long and hard before they make another drastic change that will effect whats left of their loyalist fans.

People want to watch racing. I dread when I hear “Pit stops coming up soon so we’ll go to a commercial break and be back for those” Really? I want to watch cars racing. Not sitting on a jack getting gas and tires. Imagine an NFL game going to a commercial cause the two minute warning is coming up soon. That makes no sense to me. Plus if your driver is not in the playoffs good luck seeing him on Sunday. Will it ever beat the NFL? Nope. Does it have to? Nope. One more thing. 90% of NFL games are on network television. Not cable. Want more fans watching? Give them a chance to.

“Busch blatantly ignored all those things, with safety being the paramount reason for the fine. Will $50K break the bank for KFB?” No it won’t and it surely won’t change his baby-like, sore loser attitude. And after that, he blames his team for his failures. He has NEVER been a team player. If only M&M’s had the nuts to pull the sponsorship for a more deserving driver.

First of all, the NFL isn’t competing with NASCAR for audience share. Nascar is trying to compete with the NFL. With the Stage Racing (competition yellows), I don’t even turn it on until the last 30-40 minutes. I can turn off the game for that short period of time and switch it back without missing much.

You might not be old enough to remember, Davey, but NASCAR was just about to overtake the NFL in popularity before Brian France took over. Yes, that is true. All he had to do was leave the sport alone…but he couldn’t do it. His monumentally stupid playoff idea over the loud objections of fans was the beginning of NASCAR’s decline.

The NFL is not unbeatable…NASCAR could have beaten them with competent (or even completely unconscious) leadership.

But no longer. Automobiles aren’t as important as they once were. The soon to be implemented introduction of hybrids may not be as much of a non event as it was in F1.
Today the various media report a rating of viewers at Darlington of 1.45 as a success because it is higher than the disaster of last year.
Whether Nascar could have overtaken the NFL is subjective, but there are some who claim today that it is more profitable today.
And I suspect in some ways, on the B to B level it may be. Still it appears to be slowly sinking and i dont look for that to change.