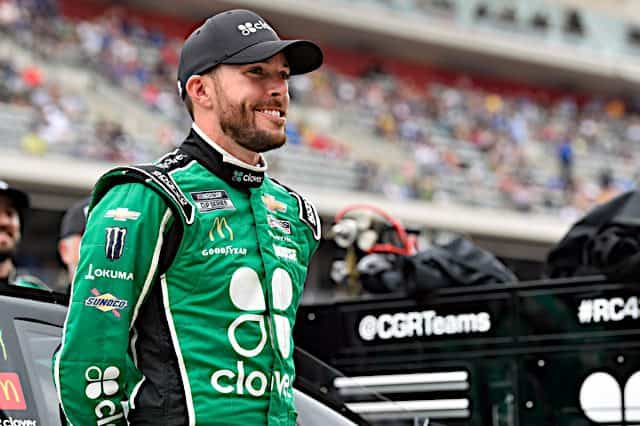 DARLINGTON, S.C. — As his tenure with Chip Ganassi Racing nears its checkered flag, Ross Chastain has no pressure.

There are no playoff expectations, since his No. 42 team didn’t qualify for the postseason. There is no need to audition for a new ride, since he’s already confirmed to join Trackhouse Racing Team in 2022 as the driver of the team’s new No. 1 car. All there is to do is go out and try to wind up in victory lane.

Chastain damn near got there Sunday (Sept. 5) at Darlington Raceway and came away third, a night in which he showed legitimate speed to contend for the win.

The performance was gratifying following one of the most grueling races of the season, an exhausting four-hour, 500-mile contest upon one of the most abrasive pavements on the NASCAR circuit. How rewarding was it?

Chastain’s performance wasn’t relegated to only one green-flag run. He was a legitimate contender from the drop of the green flag and quickly found himself running inside the top 10. He and the team built upon that throughout the night and pushed to become a steady top-five car.

And though the performance may appear sudden and jarring — especially outrunning his playoff-contending teammate Kurt Busch, who finished sixth — this wasn’t even Chastain’s best finish of the season. That came in June when he finished second at Nashville Superspeedway, another 1.3-mile oval and another race that featured the same 750-horsepower package run at Darlington.

The goal for his No. 42 team, he said, remains to improve on the three 550-horsepower tracks left on the schedule: Las Vegas Motor Speedway, Kansas Speedway and Texas Motor Speedway.

“Racing in the Cup Series at a 550-package track is insane,” Chastain said. “Like, this [Darlington] is like short-track racing. This is like, throttle and brake and steering and like feeling the car. And in the 550s, I haven’t gotten there yet. If it is that way, I haven’t felt it. Trying to break a lot of old bad habits I had.”

Many of those bad habits were developed long before Chastain got to CGR, where he sits in the best equipment of his brief Cup career on a weekly basis. Before joining Ganassi, Chastain was regularly found competing for Spire Motorsports and the former Premium Motorsports, neither of which had the resources necessary to be a consistent top-20 team at the sport’s premier level.

“If it wasn’t for those cars, I wouldn’t be here,” Chastain said. “But yeah, there’s a different way you can drive these fast cars and there’s things you can do that, when I was here in the past, that I couldn’t do.

“And I probably wasn’t at the point I am now [as a driver]. And I didn’t have the resources during the week, the data to look at. So I’m not saying I was where I’m at now. But yeah, no, there’s definitely more that you can do with the No. 42 car.”

To his point, Chastain has been required by Ganassi to improve physically and mentally. That addition has made him sharper behind the wheel and is a drastic change from the teams he’d been with previously.

“CGR makes me work a lot harder during the week [with] Josh Wise (CGR’s former driver turned athletic trainer),” Chastain said. “I used to eat really good breakfast and really good lunch and really good dinner every day. And now, they’re good, but they’re not as filling and I do a lot more exercise. There’s just so much more that goes into it.

“I have so many resources. I have so many people to go help me be the best race car driver I can be, and that’s what makes a difference. That’s why these guys get so good over time.”

Though his success has come in spurts, Chastain is reaping the benefits of that change of pace as often as possible. The good news is that five of the final nine races will come at tracks utilizing the 750-HP package, including the Charlotte Motor Speedway ROVAL in a year in which Chastain has produced strong road course runs.

Next up for Chastain will be the Salute to American Heroes 400 at Richmond Raceway on Saturday, Sept. 11. The Cup race will go green at 7:30 p.m. ET on NBC Sports Network.

Ross did a great job pressuring the leaders. The car was strong and he didn’t make mistakes. In the past he might even overdrive it at the end. Strong race.