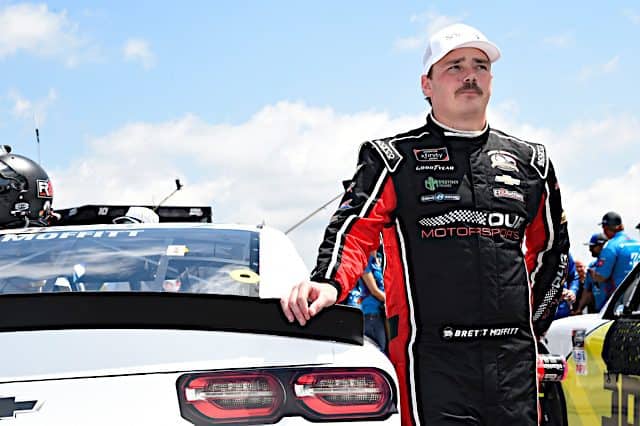 Brett Moffitt will continue to stay out of the No. 02 Our Motorsports car this weekend in the NASCAR Xfinity Series race at Richmond Raceway. Ty Dillon will sub once again, Moffitt said in a post on Twitter.

Moffitt sat out last week’s event at Darlington Raceway because he felt ill, according to his tweet.

This will be Dillon’s fourth race for Our this season, earning a seventh at Charlotte Motor Speedway and a fifth place at Atlanta Motor Speedway. Last week he drove the No. 02 to a 13th-place finish at the Lady in Black.

He previously piloted the No. 54 car in four races for Joe Gibbs Racing.

“I’ll be in Richmond this weekend with the Our Motorsports team, but it will be as a spectator atop the team pit box,” Moffitt said on Twitter. “Last Saturday, en route to Darlington, I started feeling ill, which ultimately caused me to miss that race. After meeting with my doctors this week, they want me to sit out at Richmond as well, just as a precautionary measure. I plan to return to the seat of the No. 02 Chevy next week at Bristol (Motor Speedway). Thanks to Ty Dillon for filling in for me at Darlington. I’ll be rooting him on in person as he takes the wheel of the No. 02 Fr8Auctions Chevrolet again this Saturday!”

Moffitt’s season best finish in Xfinity was a runner up at Daytona International Speedway. He has two top fives and 16 top 10s in 55 Xfinity races. Additionally, he’s the 2018 Camping World Truck Series champion and has earned 12 Truck victories.

I tought Ty Dillon was the part time driver for the Toyota 54. I haven’t seen an article saying that has ended. I didn’t think manufacturers like switching their drivers from one make to another in the same series.
Where’s the scoop FrontStretch?