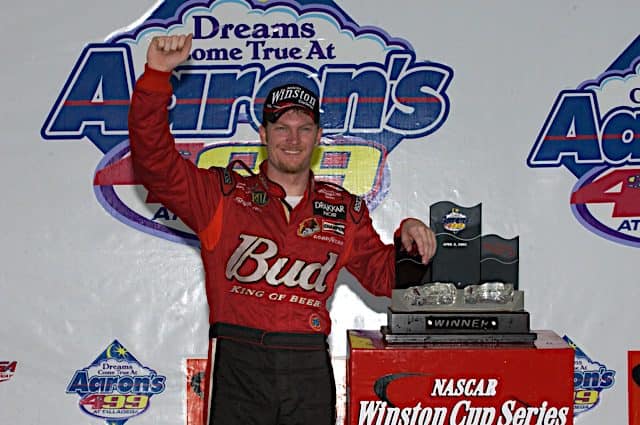 For one day a year, either on a Friday night or a Saturday afternoon, I get to be 13 years old again.

Normally, that wouldn’t be a positive.

Being 13, at least as a seventh grader in 2004, sucked. I don’t think you need me to tell you about the horrors of middle school.

However, there was one good thing about the dawn of my teenage years: watching Dale Earnhardt Jr. race in NASCAR.

Dale Jr. was my favorite NASCAR driver not named Dale Sr., and 2004 was his best year in the NASCAR Cup Series. From the Daytona 500 to the Bristol Motor Speedway night race and the fall Talladega Superspeedway race, Earnhardt racked up six wins that season.

It was the last great year to be a fan of the No. 8 Budweiser Chevrolet, Talladega points penalty and all.

In the years that followed, I went from being solely a fan of NASCAR to covering it for a living. It was in that journalistic capacity with Sporting News that I attended my only Earnhardt race win, at Martinsville Speedway in 2014.

While I’m proud of the story I wrote that day, I’ve always hated I didn’t get to fully experience the ecstasy of the win as a fan, like I did when he triumphed in the Daytona 500 earlier that year.

If you had told me in 2004 that I would ever be in position to ask a question at the conference, let alone having to visit Hendrick Motorsports to do so, I would have stared at you like you grew a second head.

At the time, the end of Earnhardt’s Cup career was a punch to my 13-year-old gut. The fact he went winless made it even worse (though sporting his 2000 rookie paint scheme in the Homestead-Miami Speedway finale helped ease the pain).

My tune on Earnhardt’s departure changed the following year after the publication of Earnhardt’s book “Racing to the Finish.” It documented his battles with concussions and their impact on his career. Reading its roughly 200 pages actually made me wish he’d hung it up sooner.

But having one race a year doesn’t hurt.

That weekend has arrived.

Earnhardt will make his annual appearance in the NASCAR Xfinity Series, once again driving a No. 8 Chevrolet in Saturday afternoon’s race at Richmond Raceway.

One month from turning 47 years old, it will be his fourth Xfinity start since his Cup retirement.

But what if it’s his last?

Earnhardt’s JR Motorsports has consistently fielded four-car teams since 2016, with three consisting of full-time drivers and a fourth considered the “All-Star” car.

In the last two months, the team has announced Josh Berry would drive the No. 8 full-time in 2022 and Noah Gragson will return to the No. 9 next year for his fourth full-time season at JRM.

Sam Mayer is already signed up to run full-time next year, too.

With the likelihood of Justin Allgaier and Michael Annett returning to the organization, that raised the possibility of there not being a car for Earnhardt to make his annual one-off start in.

Unlike the Cup Series, there’s not a four-car team limit in Xfinity.

Soon after the Berry news dropped, Earnhardt popped into the appropriate thread on Reddit and dropped this hint.

I’m sure my inner teenager wasn’t the only one who let out a sigh of relief when he read that. If there’s no issues expanding to five cars, why not a sixth?

But if it is, Richmond would be an appropriate track for Earnhardt to exit stage left.

While it’s not Daytona or Talladega, where Earnhardt taking the lead was met with thunderous cheers, the short track was one of his best tracks during the peak of his powers.

Richmond is where Earnhardt earned his most recent NASCAR victory, winning the April 23, 2016, Xfinity race there.

“I always have a lot of fun when I come back for my one race a year in this series,” Earnhardt said in a media release. “Richmond is one of my favorite tracks, and it’s one I’ve had a lot of success at in the past. I know that Taylor (Moyer, crew chief) and the entire No. 8 team will unload a fast Camaro, and hopefully we’ll have a shot at it towards the end of the race.”

Regardless of if it’s the end of Earnhardt’s time in the cockpit, I’m going to enjoy the moment. My favorite driver will be back on the track.

For at least a couple of hours, I can pretend it’s 2004 again and all is right in the world.