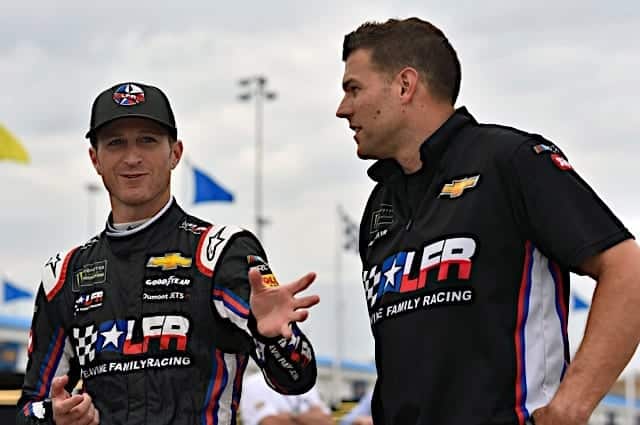 As he’s done for the past few years now, fan favorite Dale Earnhardt Jr. will get behind the wheel of a NASCAR Xfinity Series car again for one race.

On Saturday, Sept. 11, Earnhardt will pilot his own No. 8 Chevrolet in the GoBowling 250 at Richmond Raceway. It’s a good place for him to make his comeback, as his most recent Xfinity win happened there in April 2016. Although you can never tell when it may be his last race or not; we’ll just need to wait and see what next year’s plans are for June Bug.

Greg Biffle, Matt Kenseth, Trevor Bayne, James Buescher, Bill Lester and Erik Darnell are the most recent examples of drivers who have broken their retired statuses to compete in a NASCAR race again. Of course, there are plenty of former drivers who fans wish were back behind the wheel.

Which former driver do you believe should make a comeback to the track? Here are five good candidates:

Jeff Gordon’s Hall-of-Fame-worthy career sent shockwaves all across the realm of NASCAR. His can’t-miss driving talent set the bar for thousands of other racers to try and match. He wasn’t dubbed “Wonder Boy” for nothing.

Gordon’s original retirement was to be after the 2015 championship finale, where he finished third in the standings. However, after Earnhardt was sidelined for the second half of the 2016 season due to concussion symptoms, Gordon made eight more starts before retiring for good after his 805th career start, coming at Martinsville Speedway. He had focused on his TV career at FOX ever since until his recent transition into power at Hendrick Motorsports.

During a 2018 Q&A on Twitter, Gordon did express an interest in racing in the NASCAR Camping World Truck Series at Martinsville. Despite spending over 20 years in NASCAR, Gordon has zero Truck Series starts to his credit.

Since GMS Racing operates the No. 24 Chevrolet, Maury and Spencer Gallagher should try giving Gordon the golden chance to make his debut in the series with the very number he made famous.

Another Hall of Fame driver, Tony Stewart continues to stamp his legacy in the world of racing.

Stewart is a winner in every racing series he’s participated in. USAC, IndyCar, ARCA, NASCAR, World of Outlaws and now SRX, which he also co-owns and manages. Additionally, he co-owns and manages Stewart-Haas Racing, runs the All-Star Circuit of Champions sprint car series and is the owner of a handful of dirt tracks including Eldora Speedway in Ohio.

Stewart’s last NASCAR start was the 2016 Ford 400 at Homestead-Miami Speedway where he finished 22nd. Last year, he had expressed his desire to compete in the inaugural NASCAR Xfinity Series event on the Indianapolis Motor Speedway road course, but backed out of those plans.

But when NASCAR returns to IMS next year, “Smoke” shouldn’t pass up the opportunity to contend for a win again on the hallowed grounds of the Brickyard.

When Carl Edwards bitterly lost out on winning the 2016 NASCAR Cup Series championship at Homestead-Miami Speedway, most people expected him to get back up on his feet and try again in 2017. But it never happened.

To everyone’s surprise, Edwards announced his decision to step away from full-time NASCAR racing. For many folks, the circumstances surrounding his decision did not line up, since he was only 37 years old and was driving for a championship-caliber team like Joe Gibbs Racing — and, to boot, had nearly won that 2016 title just a couple months earlier. He had plenty of expected time ahead of him in the car. But, alas, more power to him for choosing to spend his days pursuing other meaningful activities in his life.

At least for now, fans will have to imagine what could’ve been if Edwards stayed. But never say never.

Don’t forget about Biffle’s 2019 comeback win in the Truck Series with Kyle Busch Motorsports at Texas Motor Speedway. Edwards and Busch were teammates during his two-year tenure at JGR. Perhaps a one-time deal could occur between the two and allow Edwards to flex his muscles and pick up a comeback win for himself someday.

He was a colorful character inside a racecar, and he is still that way as a commentator for FOX. Clint Bowyer knows how to amp things up no matter what the situation is.

Bowyer stepped away from his driving career after enduring a rather disappointing 2020 season, where he scored only two top fives, 12 top 10s and a 12th-place points finish. Fortunately for him, FOX offered him a spot to join Mike Joy and Gordon in the booth for the network’s portion of races to broadcast this year.

But what if Bowyer did not get the TV offer from FOX? Who could he have driven for in 2021, if not for Stewart-Haas Racing? Hopefully, if the chance ever comes around, a Truck or Xfinity team could give him the chance to taste victory again. His home track of Kansas Speedway would certainly be a good venue.

Washington’s own Kasey Kahne brought a fresh, electric flare to NASCAR when he began his Cup career in 2004. But the way it all came to an end leaves a void in many of his fans’ hearts.

See also
Did You Notice?: Major U.S. Markets Without a NASCAR Cup Race

When he scored his final career win in the 2017 Brickyard 400, Kahne was exhausted as he exited his car in victory lane. This served as an unfortunate foreshadowing to a year later in the Southern 500 where he exited his car after posting a 24th-place finish, suffering aches and pains and requiring medical assistance at the track. He had already announced retirement from full-time racing long before that weekend, but as the weeks went by, his health hardly improved, and his return to the track kept getting delayed. Sadly, he never returned to NASCAR following that race.

Kahne has since chosen to compete in the World of Outlaws full time and owns a team in the series. But with the nature of his premature exit from NASCAR, he’s certainly deserving of a chance to come back and possibly find a sense of closure to everything.

He could even try to add on to his remarkable Truck Series statline of five career wins in just six starts. As much peace as he’s having with his sprint car racing endeavors, a one-time return to NASCAR shouldn’t be out of the question.

It was by the closest margin since timing and scoring went to thousandths of a second. The pole sitter really earned it this time.

Wrong place! It was meant for the pole article.