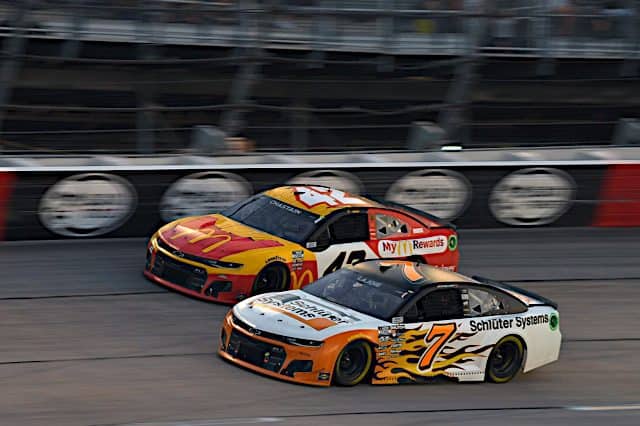 What happened at Darlington Raceway?

Last weekend, the NASCAR playoffs began with a bang at Darlington Raceway, where…

Love it or leave it, football is still the king of American sports. College football had a strong start last weekend, while prior to that, the NFL Network dominated cable in August with the preseason games. With the dramatic boom in gambling helping to feed into it, this season seems like it will be the most watched NFL season in a long time, if not ever. And that’s in a TV environment where most programs are falling in viewership.

NASCAR has always had trouble competing against football in the fall, with a tough choice: race on Sunday and get killed by the NFL or race on Saturday and get killed by SEC football. Stock car racing was born in small towns in a world with no television. So there’s always been this tradition of the season winding down after the Southern 500 and concluding a couple of months afterward. One of the big reasons why NASCAR implemented a playoff format to begin with was because it had no hook or steam to combat football’s stranglehold.

It’s time to change things up, especially with the Pocono Raceway doubleheader probably off the schedule. What happened last year should have been a note to everybody that NASCAR can adapt itself in certain ways in order to get in races. It doesn’t need practice or qualifying, and quite frankly with the rise of simulators, there really won’t be that big of a need for it in the future. And it can run more than one race a week.

There is a window in order to get NASCAR away from the vast majority of football season and keep the same amount of races promised to its TV partners, but it would require some of those COVID-era tricks.

What would the NASCAR Cup Series schedule look like?

I’m not going to completely give out a schedule track by track but instead give out just a general overview.

If it is adamant about doing a race next year at the LA Memorial Coliseum, why not swap the Busch Clash with the All-Star Race? It might be hard to market the Clash in the Los Angeles market. But an All-Star event? Any sports fan can understand what that is.

Again, I’m not going to fantasy book a schedule with specifics, but let’s put the Clash around mid-May. And instead of winning a pole to go in, let’s also get Xfinity to sponsor it and have the fastest lap winners in due to how few actual poles have been won this season.

Running a race every weekend (except for Easter) from the start of February through mid-June next season gives FOX its 18 races. After a week off, it’s time for the NBC Road to the Playoffs or Summerfest or however they want to market it. Over the next six weeks, there would be a race on Sunday and a race on Wednesday, with both being short sessions with no qualifying or practice. The lineup would be determined by formula. After the last race and the 28th of the season, one more Sunday race would be the playoff cutoff race. The playoffs are way too long already and really need to have the first three races snipped and turned back into regular-season events.

After one last off-weekend after running 13 races in seven weeks, it’s time for a seven-race playoff over the next seven weeks. That would end the season next year on Oct. 2, which is still in football season but at least gets NASCAR away from the triple whammy that is baseball playoffs, the start of basketball and the start of hockey that month.

Midweek races were ratings losers last year, but a big reason for that was how scattershot they were. SRX has proven that a six-week series with consistent time slots can work and may even be able to bring a younger, more desirable viewer than the Sunday shows do.

What’s the deal with Chip Ganassi Racing and Spire Motorsports?

One thing that really surprised this weekend is that the Chip Ganassi Racing cars didn’t lose any speed entering the playoffs.

Even though Ross Chastain is not in the playoffs, it looks like he’s going to be a prime candidate to be a playoff race spoiler this year. And Kurt Busch is looking like the best he’s been since winning the championship in 2004.

But they weren’t alone. Corey LaJoie took advantage of a good starting position on Sunday and drove a great race, easily the best all-around performance for a Spire Motorsports car in the team’s history.

An interesting common denominator between the three cars are that they’re all Hendrick Motorsports-powered Chevrolets. Maybe it’s just a coincidence, but I wouldn’t be surprised if some of the things Hendrick no longer needs in the last two months of this current car being on track are finding their way down to their customer cars. CGR is also in a position unlike a lot of other teams where it can go all out this year and not have to worry about the new car’s development so much.

If that is the case, I’m curious to see if other teams that aren’t normally up front, such as Roush Fenway Racing, surprisingly gain some speed in these final few races as well.

See also
Thinkin' Out Loud: 2021 Cook Out Southern 500 at Darlington

Who can take over the playoffs at Richmond Raceway?

Richmond Raceway is one of the best racetracks in the country if you are a racecar driver. Everybody who runs on the current configuration raves about how much fun it is to race on the surface, except for maybe Ryan Blaney, who has a very dismal stat line at the short track.

While Darlington definitely shook things up last week, this is usually a fairly calm race. Expect the playoff drivers to show up and run near each other all night. If there is a spoiler this weekend, keep an eye on Austin Dillon, who almost won the race last year.

Can’t keep an eye on Dillon, the networks only show the cars upfront. Unless it’s bubba wrecking someone.

Advertisers pay less for Wednesday night than Sunday afternoon. And let’s not forget how that will negatively effect at track fan attendance. Leave mid week racing in the past where it belongs.

He’s seemed to cool down the second half, but I would love to see Suarez sneak into the top 10 a few times to finish the season.

Building a schedule for television nearly killed the sport. Remember moving the Southern 500, and they really did all they could do to close Martinsville, but more fans show up there than they do in California.
I have no idea your background, but leave business and schedule decisions to the pros.

The passion is often built by being at the track. I built my initial love for NASCAR watching ESPN, TNN, TBS, CBS, etc., but going to races raises it to another level. I feel that’s huge for Xfinity, Trucks, and ARCA. NASCAR is not and never will be a significant worldwide television property like F1 or the NBA. The track experience is still important. Plus, a big part of what making watching the Dutch Grand Prix so enjoyable was seeing the atmosphere at the track.

The decline of local asphalt racing hurts, too. Enthusiasm for it feeds into NASCAR. We have nowhere near the level of major asphalt late model races as we did in the 80’s and 90’s. ASA is dead. ARCA has regional late model series now, but we still aren’t where we were. My old hometown track (Hawkeye Downs) has a half mile and quarter mile, but it hasn’t had a late model or modified division for a few years and the half mile is now only used for 100-lap races sporadically. The cars reaching a max speed of 65 to 75 isn’t the same as 110 to 120. No way Brad Loney, Justin Diercks, Landon Cassill, and Joey Gase move up like they did without weekly late models there. How’s late model racing in the South? Not the heyday. My son became a Ty Majeski fans a couple weekends ago watching him race at Hawkeye Downs and meeting him. The local tracks feed enthusiasm.

So, I agree that scheduling around TV is a mistake. I also worry that car culture is dead and that local short-track racing is dying, too, and that we have a unwinable war.