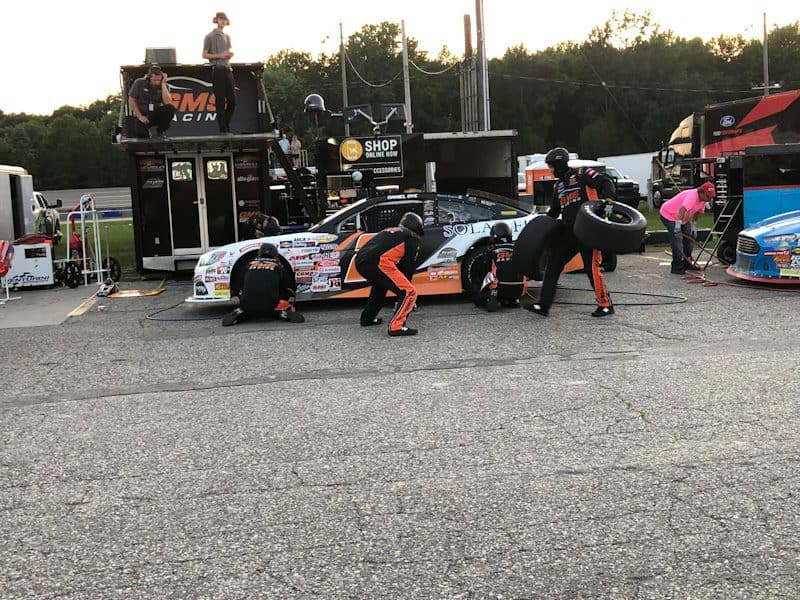 As the ARCA Menards Series competitors dredged through a messy Southern Illinois 100 at the DuQuoin State Fairgrounds on Sunday night (Sept. 5), only six cars finished the race with only four on the lead lap. To add insult to injury, excluding any contingencies, race winner Landen Lewis only won a base purse of $6,000.

While series officials have not mentioned increasing the race purses, they have talked about ways to lower costs. One of those solutions is modified pit stops.

ARCA ushered in modified pit stops for all its races once it returned from its COVID-19 hiatus. The series has used those all this year, but people still advocate for the return of live pit stops.

According to ARCA Communications Manager Charlie Krall, that option is not affordable yet.

“We would love to be able to reintroduce that but budgetarily, right now, our teams are struggling to get here from week-to-week,” Krall told Racing News Now. “To be able to allow them to do the pit stops in a controlled manner without a specialized pit crew, it’s more of a lifeline to our teams right now. We are counting down until we can get back to live pit stops. Don’t know when that’s going to be, but I know we’d like to get back to it.”

Furthermore, most drivers understand the decision was economical and know increasing costs will lower car counts.

Greg Van Alst returned to ARCA competition this year after making three starts in 2002. Modified pit stops were a reason for his comeback.

His late model team pits the car, saving him money. Additionally, he favors the two breaks, because as a part-time team, he lacks the engineering to expertly set up the car for practice and then the race. So, the two breaks allow his team to adjust his No. 35, making him more competitive.

It has paid dividends for Van Alst. In six ARCA starts this year, he has one top five, a second-place finish at Winchester Speedway and three top 10s.

Connor Mosack made his ARCA debut this year, with a pair of 16th-place finishes thus far. For him, modified pit stops make his development easier. With two preset breaks and not worrying about losing positions on pit road, Mosack can focus on driving.

“I need to go fast, and that’s good for the fans,” he told Frontstretch.

For underfunded drivers Zachary Tinkle, Brad Smith, Tony Cosentino and D.L. Wilson, modified pit stops keep them from losing more laps and more positions. It is an enormous help. That along with the lower cost of entry due to modified pit stops hopefully appeals to prospective team owners and drivers.

According to Holmes, it costs about $2,000 to have a pit crew at companion races. For standalone races such as the one at DuQuoin, it costs anywhere between $3,000-4,000, primarily depending on distance and cost to travel. Without manufacturer support for his team, Holmes estimates that savings from modified pit stops are closer to $2,000-$3,000 per race.

Venturini drivers Corey Heim and Jesse Love know the reasoning for the switch, but both are open to either version.

Both appreciate that modified pit stops give ARCA a different aspect to its races compared to NASCAR.

Love however dislikes simply driving the car all out without having to worry about saving tires because one knows a scheduled break is forthcoming.

“That’s our job to not make mistakes on pit road,” he told Frontstretch. “That would help us out before you go up to a truck [the NASCAR Camping World Truck Series]. Yeah, I would like to see it. Obviously, I am with a great team that can afford to bring pit crews to the racetrack. I understand at the end of the day, it is still a grassroots racing series. In the grand scheme of things, we do go to short tracks and have grassroots racers run. There are those that cannot afford to have a pit crew for live pit stops. I see that viewpoint and you have to show those drivers the same respect.”

Nick Sanchez agreed with Gibbs to an extent. Sanchez proposed using both versions, depending on the racetrack.

At the bigger tracks, so the non-companion ones and the ones not on the ARCA Menards Series Sioux Chief Showdown, use live pit stops. For the companion and Showdown races, use modified pit stops.

It is an interesting concept, though it may be challenging for fans to follow, constantly switching between the two.

At the short tracks on the ARCA schedule, some tracks do not even have permanent pit roads.

Fun fact, there normally isn't a pit wall at Elko. They haul in the jersey barriers for the ARCA race so they can do pit stops. https://t.co/9veqM6XdIH

“When we go to a place like Berlin, Toledo, Salem, that really is the only opportunity fans have to see this type of racing live,” Krall continued. “To not have a live pi stop element is not a selling point, to be honest.”

Nevertheless, series officials must continue to find ways to both increase purses and lower costs. Unfortunately, only two drivers have competed in every race, and nine of the 17 races thus far have only had 20 or fewer participants. For a series looking to rebound following its struggles during the height of the pandemic, modified pit stops lower costs which help race teams survive.

I agree 16 to 20 car counts 2 to 4 are out within ten to twenty laps usually 4 cars dominate. Arca has always had those that have those that don’t.
It has always been a feeder series. And I am ok with that just like to see bigger fields maybe less complex and lower cost cars would help.

It’s no surprise that Ty Gibbs would be in favor of live pit stops. With grandpa footing the bills, money is no object.